A significant factor in the continued growth of aquaculture will likely be the domestication of production stocks and selection of broodstock that display traits of economic importance. Without such improvements, the industry will not be able to cash in on increases from production efficiencies. Instead, it will grow in an inefficient and unsustainable manner through significant increases in the area under production.

Compared with domesticated stocks, wild stocks are nature’s reflection of maximum diversity, which is the basis for the stocks’ ability to deal with the full spectrum of environmental stresses. Therefore, it is important for any breeding program that founding populations be large enough to incorporate the diversity of the wild animals.

For most aquatic sectors, the rapid employment of captive-breeding programs is founded on stock maintenance where the working animals are in isolation and not necessarily indigenous to the area or stock improvement wherein a breeding strategy for the breeding in of desirable traits is implemented. Such programs are often based on a restricted number of populations and/or families due to the cost of maintaining large numbers of such groups.

In small populations, the likelihood of random genetic events taking over is high, and the frequencies of occurrence of particular alleles can be altered just by chance. This is called “genetic drift.” Population size determines the speed at which this happens.

Studies with terrestrial and aquatic organisms indicate a higher probability of fitness failure for inbred than noninbred populations. Further, the impact of environmental stress becomes significantly greater for higher inbreeding levels, suggesting the two can oftentimes be synergistic and not independent.

Most breeding programs are designed around intentional inbreeding for desired traits. It is just as important to maintain overall genetic diversity while simultaneously selecting for traits of economic value.

Using microsatellite markers, Aquatic Stock Improvement Co. (ASICo) has examined several captive populations maintained for several generations and compared allele differences with those in the “founding” wild stocks of origin as a measure of diversity. In most cases, the number of alleles missing in the captive stocks but present in the wild stock was significant, and in some instances exceeded 50 percent.

In a study comparing diversity loss and its effect on performance in active infection trials of Taura Syndrome Virus (TSV), ASICo found that when single spawned animals were challenged, the survivors were over 120 times more genetically diverse than the animals that succumbed. Researchers compared the captive stocks in the study with wild animals from the stocks’ native origin and found a loss of alleles in the range of 56 percent. Of all animals challenged with TSV, those that died were less diverse and more homozygous in genetic character than those that survived.

The importance of this is that when working with smaller breeding populations, traits associated with fitness like survival and growth display greater inbreeding depression than most other traits. The process of diversity loss can also be biased, since fecundity is not the same among all animals within a founding population, which could increase the rate of allele loss with each generation. Finally, many of the alleles that remain in populations suffering diversity loss change in frequency at an accelerated rate simply as a result of the loss of other alleles, thereby compounding the effect.

It is the diversity of the genes that is important, not that of the microsatellites. Genes are generally not as polymorphic (variable) as microsatellites. In fact, many genes may not be polymorphic at all. Unfortunately, there is no practical way to identify genes that are important for a given trait so there is no way to know how diverse they are originally. Changes in microsatellite diversity, however, can be used as a measure of changes in genetic diversity because the two presumably change in parallel.

In another ASICo study, the allele frequency of captive stocks that had suffered 53 percent overall diversity loss was examined. When looking at the remaining alleles and the frequency at which they occurred, there were dramatic differences in frequency between the founding wild stocks and the sampled captive populations.

Small breeding populations which show predominance of some alleles are more likely to show genetic drift in that direction. Dominance of the remaining alleles is good if the trait is of interest. However, if the trait is not desired or negatively impacts some aspect of fitness, then it may interfere with both the breeding effort for specific traits and the overall level of animal fitness (see Fig. 1).

Typically in a selective-breeding program, selection is focused indirectly through phenotype on an inbreeding strategy that enriches for genes responsible for some desired trait. Genes responsible for other traits are also subjected to similar enrichment pressures, but since no selection is going on with respect to these other traits, it is equally probable that less desirable forms may be enriched as more desirable forms are lost. Breeding strategies can often be derailed without some sort of genotypic guidance. Microsatellites provide excellent markers for this purpose. 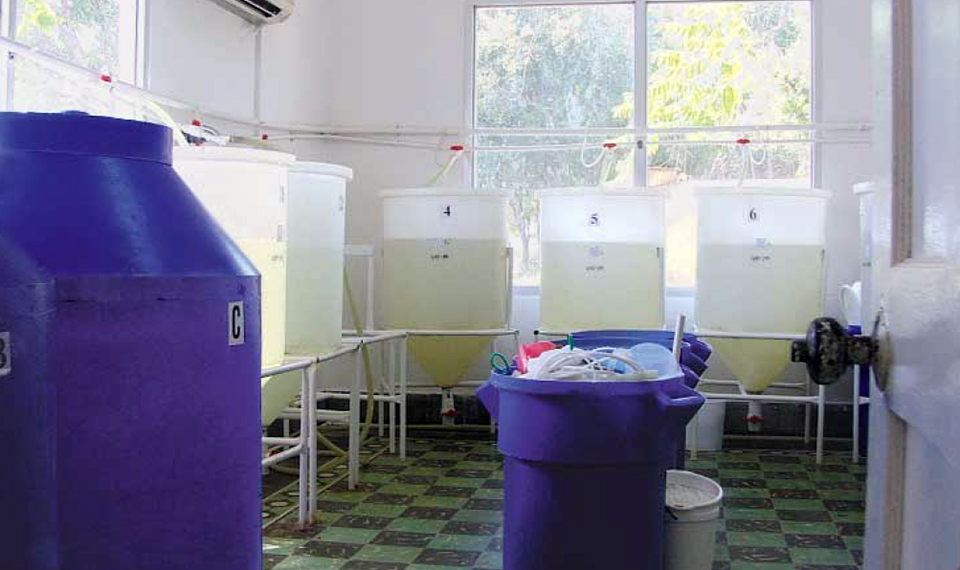 Based on histopathology and ultrastructure, the etiology of necrotizing hepatopancreatitis (NHP) in Pacific white shrimp was related to an intracellular bacterium.