One of my first encounters with refrigeration occurred during a summer work term at Scotian Halibut’s land-based marine recirculation site. The site had been developed over a period of four to five years. Fish had just been put into the final tanks before my work began in May.

As ambient temperatures started to climb past the comfort zone for halibut production, the rush was on to install chillers on the recirculation system. Nearly six figures later, two 30-hp refrigeration compressors were up and running. Even when watching utility bills triple when all chillers were running, nobody thought to check the efficiency of the chillers.

Fast forward six years. The refrigeration contractor retired. Chillers at the hatchery were approaching 10 years old, and compressors were failing on a regular basis. Water chiller maintenance costs were quickly rising. Yet the refrigeration systems on the two coolers were trouble free and just as old. I began to dig into refrigeration, suspecting that the water chillers had some flaws in design.

When I finally decided to measure chiller performance, the numbers were not good. The coefficient of performance (COP) measured 1.6, on average. Then a new refrigeration contractor that specialized in constructing water chillers from scratch came on the scene. Before even seeing the equipment, the contractor told me the problem.

At that point, the company had 60 hp of compressors running. The contractor took half of the compressors out of service and connected the remaining 30 hp to all the chiller barrels. Performance doubled or better to an average 3.5. Chilling capacity remained the same, but the power bill due to chilling was halved.

Coefficient of performance is a form of efficiency measurement that compares the work done with the energy input. Clearly, efficiency greater than 100 percent is not possible. But in refrigeration, the object is not to create energy with the input electrical energy. The work done is energy transferred from one spot to another.

In refrigeration, energy transferred should be greater than energy input. In chilling applications, a COP between 3.5 and 4.5 should be achieved in most aquaculture applications. If heating, the COP should be higher than 4.0. New heat pumps have recently seen COP over 5.0.

The general formula for measuring COP is:

To get an exact measurement of COP, however, requires a lot of equipment. Fluid density, flow rate, temperatures into and out of chiller barrels, compressor voltage and amp draw, and compressor power factor at its current operating point are all variables in the COP formula. Fortunately there is a general rule of thumb equation that can quickly gauge chiller performance:

So what was wrong with our system? We had several common errors at play. What I have since found to be the most common factors that affect chiller performance in aquaculture facilities are inadequate water flow, inadequate heat recovery (if part of the system), inappropriate compressors, and imbalances among compressor, condenser, evaporator and thermal expansion valves.

The water flow rate through a chiller barrel can have a significant impact on performance. When a chiller barrel is manufactured, it is designed for a specific flow rate. This rate is not a maximum flow, as is often the case with other aquaculture equipment. It is important to maintain a minimum flow rating for chiller barrels.

Find out your chiller barrels’ minimum flow rates and maintain them. Ideally, chiller barrels should be plumbed in a loop configuration to maintain flow rather than in series with other equipment. When a chiller barrel is used in series in a system with variable flow, major inefficiencies are likely, and equipment failure is possible. For optimal COP and equipment life, adhere to manufacturers’ recommended flow rate ranges.

For example, at Scotian Halibut this summer, incoming water temperatures were as high 18 degrees-C. For one broodstock tank, water entering at 40 L/minute had to be maintained at 5 degrees-C. With heat recovery working well, the heat exchanger was able to cool the incoming water from 18 to 8 degrees. The chiller took care of the remaining 3 degrees.

Without the heat recovery in place, the chiller load would have been over four times greater! This means the chiller would had to have been four times larger, and the electrical use of that one action would be four times higher. However, the other issue is that the operating point of a chiller that sees 18 degrees-C water is different from one seeing 8 degrees-C water. Suction pressures, superheat and settings for thermal expansion valves or other metering devices would be different.

To get to the point, a chiller produces highest efficiency at one point. To stray from that point can have a very significant effect on chiller COP.

One challenge in aquaculture is determining which category an application is in. Due to seasonal variations in ambient temperatures, some applications may bridge the gap from low to medium or medium to high temperatures.

System imbalance was the main reason Scotian had such a low COP and high maintenance costs. The evaporator was only capable of about 40 percent of the compressor capacity. A 10-ton compressor and condenser were custom fit to an evaporator with two, 2-ton thermal expansion valves for a total capacity of 4 tons.

Because the semi-hermetic compressor was cooled by refrigerant from the evaporator, the symptom seen was failed, overheated compressors. Admittedly, solving this issue took a knowledgeable refrigeration contractor. However, determining if a system is balanced should be as easy as reading the nameplates on the compressor, condenser, evaporator and thermal expansion valves.

Refrigeration systems in aquaculture should have lives of 10 to 20 years without catastrophic failure. Depending on the environment, maintenance should involve primarily surface items, such as inspecting electrical components annually if moisture and/or salt are present, or painting the equipment. If this is not the case, it is cheaper to find the right help now. Refrigeration equipment consists of very expensive materials that only seem to increase in price – titanium, copper, refrigerant, etc.

If you are interested in reducing your energy bill, take the time to measure your COP. If you have a significant amount of heating or cooling with refrigeration equipment, there may be significant savings available.

(Editor’s Note: This article was originally published in the November/December 2011 print edition of the Global Aquaculture Advocate.) 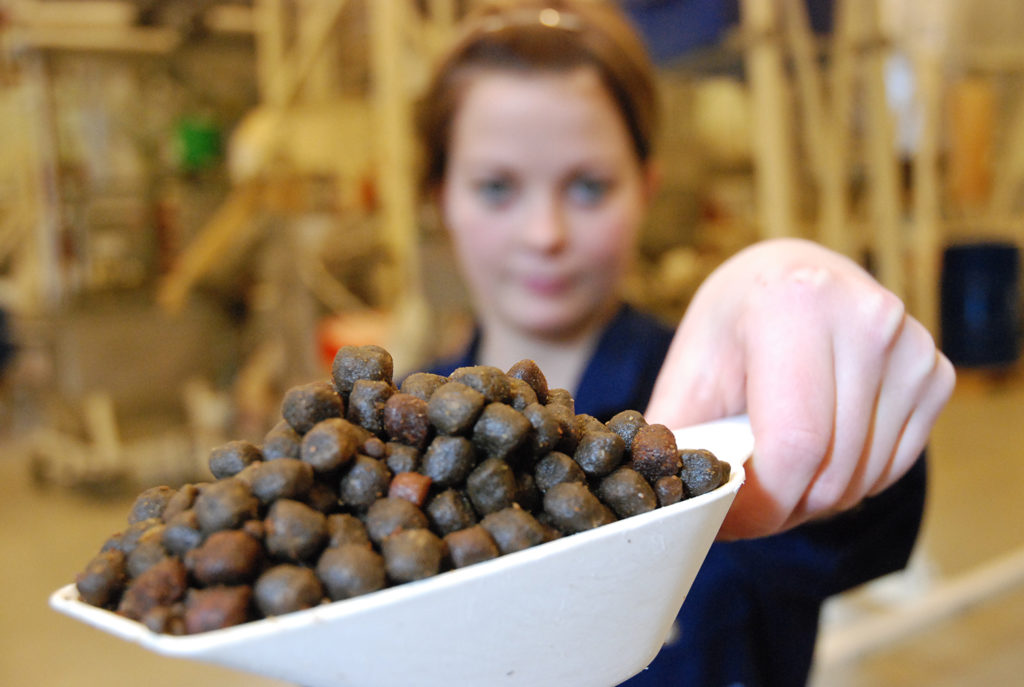 Inside the Cargill Aqua Nutrition aquafeed plant in Scotland

Formed in 2015, following Cargill’s acquisition of salmon feed specialist EWOS to complement its own warm-water aquaculture feed business, Cargill Aqua Nutrition produces feed for salmon, tilapia and shrimp in 20 countries around the world.