Jellyfish infestation, oil spills and biofouling can be avoided

The development of offshore fish cage technology has recently been driven by the limitation of nearshore site expansion. Most offshore sites, however, are exposed to heavy winds and waves, which can severely stress the fish or damage the cages. Furthermore, some sites can be near shipping lanes, be exposed to harmful algal blooms and be difficult to access during adverse weather conditions.

Therefore, the development of fish cage technologies that can be submerged may be necessary to avoid the operational challenges of surface-based aquaculture. Subsurface aquaculture may also help operators avoid surface-related issues such as jellyfish infestation, unsuitable temperatures, high pollutant levels, oil spills and many types of biofouling.

The next step in development will be to design a commercial-size system and perform engineering and economic analyses to investigate whether these systems could be effectively incorporated into the wider marine aquaculture industry.

The primary objective of developing the submersible fish cage system was to provide the capability of reducing the mortality of farmed fish due to toxicity from algal blooms in coastal waters. The cage design consists of 12 angled rigid frame components with both containment and cover nets, 12 upper floats, 12 tanks for fixed and variable ballast, mooring ropes, anchors, a control station and surface control panel.

The mechanical components of the control system are attached to the top of the fish cage and tethered to the surface control panel. This allows operators at the surface to regulate the flow of air or seawater to the variable ballast tanks. The surface control panel regulates a compressed-air source with six two-way and 12 three-way valves and includes three clinometers, four electrical terminals and necessary air hose connections.

The watertight control station is attached to the center of the upper frame of the cage with stainless steel turnbuckles and wire rope. It is also connected to the surface control panel (located on a service vessel) by electrical cables.

The cage system can be submerged to a predetermined depth and then resurfaced after a specified time with a remotely operated control system. To surface the cage, air released from the compressor displaces seawater in the variable ballast tanks, increasing buoyancy. The motor valves are operated electrically by the control system from the surface control panel. Although biofouling on the ballast tanks increased during a five-month test, the piston valve closed and opened normally.

A fully automatic rigid fish cage system was also developed. The automatic control system monitors environmental parameters such as wave height and wind speed so the cage can be submerged in extreme sea conditions and then surfaced after the weather has passed.

In the autonomous cage system, vertical positioning in the water column is done with a control system that first senses surface wind speeds. At a predetermined “extreme” value, the control system operates a combination of variable ballast tanks that can be filled with water for sinking. When the surface conditions become calm, the water in the tanks is displaced with air, and the system comes back to the surface.

The 12-sided cage structure incorporates a steel framework with a 5.92-m diameter and depth of 2.91 m. Attached to the steel framework are a housing for motor valves that control variable ballast tanks, eight housings for two air compressors, a main control system, four batteries, a reserve air tank, four high-pressure air tanks, 12 variable ballast tanks and a seawater pump housing. The net of the fish cage is tightened across the frame to minimize volume reduction due to currents.

The cage is outfitted with a control station above the valve housing that adjusts buoyancy by utilizing compressed air stored in air tanks. The mechanical components of the ballast systems are operated by automated software that incorporates control and monitoring algorithms when a preselected sea state occurs.

The control station has a wind gauge, wireless communication printed circuit boards and a transmitting antenna. During operation, it monitors wind speed, so the cage can be submerged before extreme conditions cause damage and then surfaced after the bad weather passes.

Many of the system and subsystem assemblies of the control system can be simplified to minimize potential failure points and reduce the amount of maintenance required. Combining pressure housing units may decrease potential leakage issues.

From an operational perspective, it is important to tighten slack in all of the attachment line connections while the fish cage is submerged. If not, the cage can experience excessive movement that may be detrimental to the caged fish stock.

Editor’s Note: This article is based on the author’s research on automatic submersible fish cage systems. Dr. Kim’s work was considered for the Novus Global Aquaculture Innovation Award, the first of which was presented by the Global Aquaculture Alliance at the GOAL 2013 conference in Paris, France. 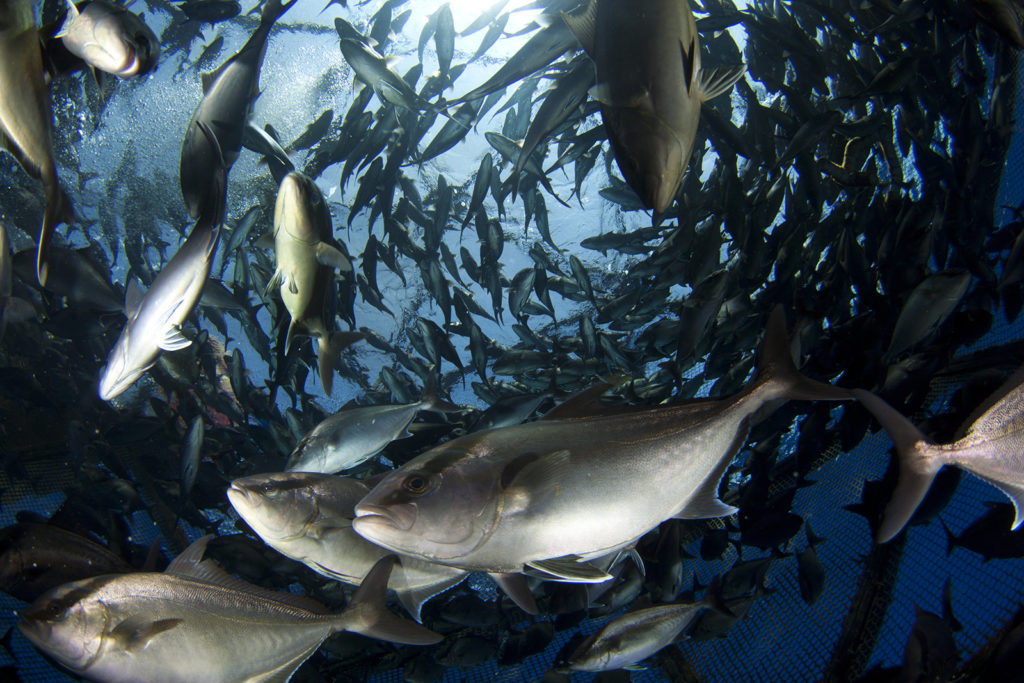