In the terrestrial animal feed industry, flavors and palatability enhancers are used to increase feeding and minimize feed waste. Similar “attractants” are also used in the aquafeed industry, where rapid identification and consumption of feed is very important in the aquatic environment. Feed particles that remain unconsumed in water lose water-soluble nutrients over time. Wasted feed is also a source of pollution in rearing systems.

Other applications of attractants include the amelioration of the taste of medicated foods; enhancement of feeding in situations where voluntary food intake is expected to be low, as when animals are sick; and weaning larvae and juveniles from natural food to formulated diets. It is also believed that oral stimulation from attractants induces gastric secretion in animals’ alimentary canals in anticipation of the incoming food, so that better digestion and absorption occurs.

How do attractants work?

Attractants release chemical signals that are received by the olfactory (smell) and gustatory (taste) receptors of the animals. These signals are then transmitted to and interpreted by the central nervous system, where they consequently elicit reactions such as movement toward the source of the signal, initiation of feeding, ingestion, and continuation of feeding. Scientists believe that in the case of olfaction, the signals are interpreted based on previous experience. Thus, one can train a fish to like or dislike a chemical signal by providing reward or punishment.

Scientists also believe that olfaction is a distant-sensor, which induces a general alert response, and there is hardly any species-specific difference in the spectrum of stimulatory substances. Therefore, signals that appeal to the olfactory sense may be important only in the initial phases of food search.

In contrast, the gustatory sense is highly developed in many fish species, and considered innate and genetic in origin. In other words, we have to feed the cultured species what it likes, for we cannot train the animals to accept everything we feed them.

Although it is hard to generalize based on the evidence available, proline and glycine are known to be highly effective in carnivores, while glutamic acid is effective in herbivores. Betaine often has a synergistic interaction with amino acids in improving the attractability of feed.

Betaine and glycinebetaine are highly effective attractants in a number of aquatic species, including shrimp, pufferfish, pinfish, pigfish, red sea bream and Dover sole. The effectiveness of trimethylamine, glycyamine, and creatine is also indicated in some species.

Trimethylammonium hydrochloride is a possible stimulant for freshwater prawns. Dimethylthetin is a proven attractant in Dover sole, and dimethyl-beta-propiothetin is an attractant for shrimp, carp and goldfish.

Nitrogenous products that result from flesh decomposition – such as putrescine, cadaverine, tiramine, spermine, and spermidine – have long been considered potential attractants for shrimp. The positive effects of spermine on shrimp feed consumption and growth has been documented. Cadaverine has been shown to be a stimulant in freshwater prawns.

Citric acid, malic acid, and succinic acid are possible stimulants. Citric acid is conclusively known as a feeding stimulant or enhancer in many fish species, including carnivores. The low pH of feed itself might be a stimulant in some fish and shrimp species. However, it is not clear whether reducing the pH by inorganic acids alone would be effective.

Sugars are effective as stimulants in crabs, but there are species-specific differences in the types of sugar that are effective. Monosaccharides, disaccharides, and polysaccharides are considered highly effective. High amylaselike enzyme activity found in crabs’ spit and dactyl organs is believed to liberate simple sugars from the polymers, which may in turn stimulate feeding.

The aquafeed industry has long relied on ingredients that are naturally rich in attractants. Fishmeal, a major ingredient in aquafeeds, is a good source of attractants, but feed manufacturers are trying to reduce its use. Fish oil probably serves as an attractant/stimulant, as the addition of fish oil improves feed palatability.

Yeast and yeast hydrolysate are also considered attractants, probably due to their relatively high levels of nucleotides and nucleosides. However, brewer’s yeast acquires a bitter taste from the hops used in beer manufacturing, and is known to depress feed intake if used at levels exceeding 3 to 5 percent. Many plant-based ingredients contain feeding deterrents, so when vegetable proteins replace animal proteins in feeds, it is be important to consider the addition of a concentrated dose of attractants/stimulants to counter any deterrent effect.

Betaine is probably the only chemical that is widely used in the feed industry as an attractant. Its effectiveness has been shown in many fish species, but in shrimp, the evidence is still equivocal. A number of synthetic products based on a combination of amino acids, nucleotides, and other attractants are also entering the market. These products can be blended with a concentrated extract of natural attractant sources, such as various marine ingredients, to enhance their effectiveness.

Many attractants have been studied in recent years, but much research work is still necessary. There is a need to confirm the practical effectiveness of specific compounds as attractants for given species, particularly for species like shrimp that seem to require a high level of attractants in their feeds.

It is important to study not only the compounds, but also their interactions. It is also important to determine the concentration of attractants required, based on the ingredients and chemicals used in the formula. Nutritionists and feed formulators need the means to quantify attractants in ingredients, additives, and finished feeds, so the ingredients can be evaluated based on their attractability and used to provide a specific target level of attractability. 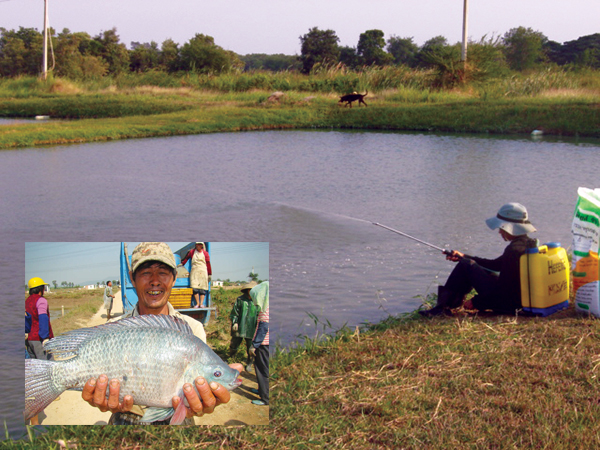 The chemical communicators pheromones can be used to induce increased feeding activity in a range of farmed species. Preliminary commercial testing with pheromone feeding stimulants sprayed onto the surface of water prior to feeding found better feed utilization in fish and better water quality. Pheromone applications also produced shrimp that were 30 percent larger than the control shrimp and had a significantly faster rate of growth.