Excessive turbidity in ponds caused by suspended soil particles is a frequent occurrence – especially in freshwater aquaculture. The most effective means of preventing “muddy” ponds is to control erosion both in pond watersheds and within ponds.

Where turbid water supplies cannot be avoided, sedimentation reservoirs allow water to be cleared of excessive turbidity before it is transferred to ponds. In some cases, however, ponds may remain turbid after all usual measures of controlling erosion and removing turbidity from inflow have been implemented.

Troublesome turbidity usually results from clay or fine silt particles. These particles remain in suspension, causing prolonged turbidity for three basic reasons. A water body may have enough turbulence to prevent fine particles from settling. The resuspension rate of particles may exceed the rate of sedimentation. In addition, colloidal clay settles at an exceedingly slow rate.

When waters do not clear after sources of turbidity have been eliminated, the total alkalinity should be tested. If alkalinity is low – less than 30 mg/L – agricultural limestone should be applied at 2,000 to 3,000 kg/ha. Alternatively, lime can be applied, but if the pond has been stocked, lime should not be applied at more than 50 kg/ha to avoid high pH. Repeated doses of lime can be made at weekly intervals.

Most aquaculture ponds with excessive turbidity receive manures, chemical fertilizers or feeds. In manured or fed ponds, one or more applications of urea and triple superphosphate or other nitrogen and phosphorus fertilizers can cause clay particles to settle.

In turbid, fertilized ponds, application of animal manure, grass or other organic material may clear turbidity. Large inputs – 1,000-2,000 kg/ha – of organic matter are needed, and it often is necessary to apply the organic matter in several small applications a few days apart to avoid dissolved oxygen depletion.

Gypsum must be applied in large amounts to remove turbidity. The usual treatment rate is 100-150 mg/L, but tests may be made in jars to ascertain the lowest effective treatment rate. In a 1-ha, 1-m-deep pond, 100 mg/L would require a dose of 1,000 kg/ha.

Gypsum should be spread over the pond surface, and as it dissolves, it will increase the calcium concentration in the water to improve conditions for flocculation of suspended particles. The effective treatment rate for calcium chloride is similar to that of gypsum.

Doses of iron and aluminum compounds needed to clear turbidity are lower than those needed for calcium compounds. For example, filter alum usually is effective at concentrations of 20-50 mg/L, and jar tests can ascertain optimum application rates. Alum is potentially dangerous because it is highly acidic, and workers who handle it should wear protective clothing. Alum also depresses total alkalinity concentrations by roughly 0.5 mg/L for each 1.0 mg/L of this coagulant.

In most ponds, alum depresses alkalinity and pH, but after a few days, values return to initial levels (Fig. 1). However, alum treatments should not be more than 50 percent of the total alkalinity concentration, and low-alkalinity water should be limed before applying alum.

Alum should be pre-dissolved in water and applied over the entire pond water surface on a still day without rainfall. Aerators can be used for a few minutes to mix the alum with pond water, but they should then be turned off to allow the floc to settle.

It is important to apply enough alum initially to cause flocculation, because alum has no residual effect. The active ingredient, aluminum ion, precipitates from water as aluminum hydroxide within a few minutes. If the initial treatment is not sufficient, it is lost. Thus, it is prudent to make a jar test to determine the minimum effective treatment rate.

To make the test, make a 10,000 mg/L alum stock solution by dissolving 1 g alum in 100 mL water and fill 10 clear 1-L jars or beakers with the water to be tested. Make a series of alum concentrations ranging 5-50 mg/L at 5-mg/L concentration intervals by adding stock solution (0.5 mL stock solution = 5 mg/L alum) to the jars. Stir vigorously, wait one hour and determine the lowest concentration that caused turbidity to precipitate.

Treatment with coagulants, particularly alum, almost always clears turbidity from ponds. However, turbidity may return because sources of turbidity have not been controlled, or the culture species caused bioturbation. Aerator-generated currents cause turbidity, and normal wave and wind action are sufficient to continually re-suspend particles and cause turbidity.

The best approach always is to eliminate sources of turbidity, and use alum only if turbidity remains. 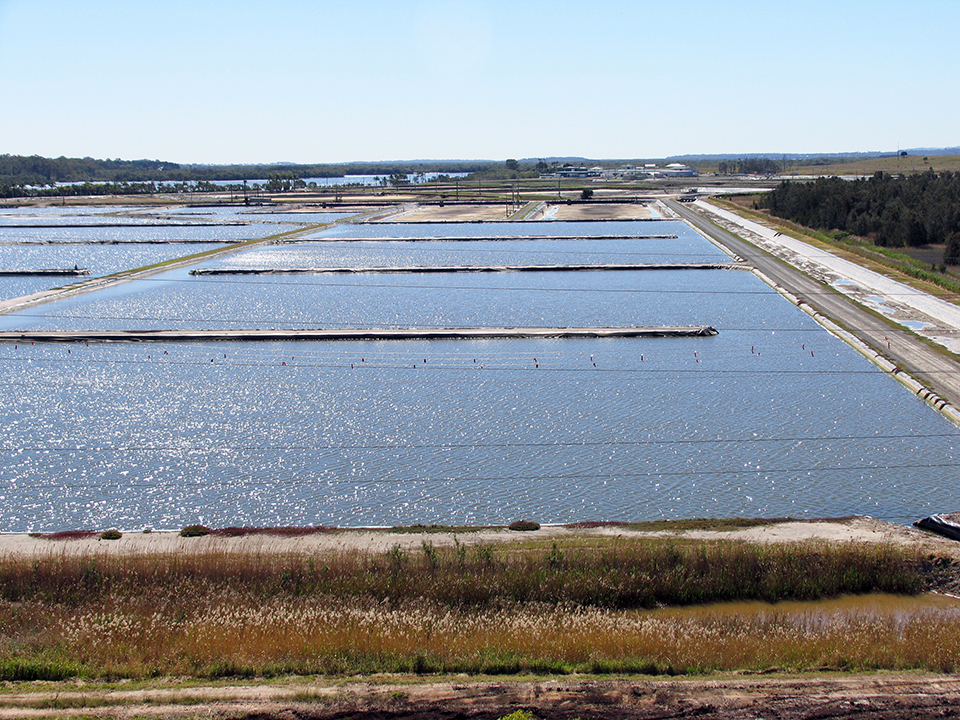 Although there is compelling evidence that early humans relied heavily on the fruits of the ocean, the mindset of powers that be tends to focus on utilization of land for food. In Australia, for example, the country controls water resources with 2.5 times the area of its land, yet it is not food secure in seafood. Many bright minds have not awakened to the unique opportunities that aquaculture and fisheries offer. It’s time to get aquaculture out of the pigeonhole.