Growing up in Maryland, Scottie Robinson III always thought he’d end up as a fifth-generation waterman, working Chesapeake Bay to harvest Eastern oysters (Crassostrea virginica) as his father had taught him to do. It didn’t quite work out that way.

“After I graduated high school, he told me I had to get a real job,” Robinson said. The oyster fishery his family had depended on for ages could no longer support them due to overfishing, pollution and habitat degradation. So he went to technical school and began work in auto-body repair shops.

He desperately wanted to get back on the water, as he did during the summers of his youth. Eventually Maryland changed its attitude and approach to oyster aquaculture, which gave him – and his father – a second chance to do get back to his roots. Robinson soon started working as farm manager at Madhouse Oysters and his father, Scott Robinson Sr., works for him on the 40-acre plot the company leases on Hoopers Island, about 60 miles southeast of Washington, D.C.

The company – founded by Ted Hooper, who now handles the “business end” by meeting with chefs and wholesalers – has come a long way in just five years of operations. Robinson credits one crucial step the company took – adopting a brand-new technology – for turning Madhouse Oysters from a fledgling farmer to an efficient and productive company.

In fact, the first few years for the farm were so rough – they had wrong equipment, bad processes, a lack of help, stressed workers and a lot of dead oysters – they inspired the company name.

“He was overwhelmed with it, waking up at night with cold sweats,” he said of Ted Hooper’s first few years in business.

And then Oyster Tracker came along. The online platform, a product of Maine-based company Shellfish Solutions, helps oyster farmers in Maryland and nine other U.S. states keep track of inventory and make better use of their time on the farm. Chip Terry, founder and CEO, explained to the Advocate that the oyster farms he works with the United States, Canada and now Ireland are entering a “digital revolution.”

“They’re realizing the huge benefits of moving to a digital tracking system. That’s the world we’re playing in,” he said.

Terry, whose product has not even been on the market for a full year, has 24 paying customers he leans on for input on how to make the program – best used on a tablet – the primary planning and inventory-tracking tool for shellfish farms. He got the idea from lobster-fishing friends in Maine who were getting into oyster farming to keep working on the water year-round.

“They had a couple-hundred thousand oysters in the water, and soon it was 5 million. All of sudden it was a big business, bringing real economic development in rural Maine, which you don’t often see,” he said. “I realized they needed more help with their products and managing their farms and labor. It gets really complicated as you get bigger.”

For two people starting an oyster farm, it’s fairly easy, he said. But as a farm scales up and it has multiple year-classes of shellfish in the water, they eventually need to hire more staff and figure out how best to grow. Because inevitably, bags of oysters go missing, labeling goes wrong and, as he explained, “bad things start happening.”

Those bad things could include highly variable mortality rates, growing labor costs and a decline in quality that can cut your market price in half, if not more. Crucial operations planning can take a back seat. For a young business, he said, it’s hard to seek crop insurance or financing if all the company records are kept on wet notebooks. “If you can’t tell what you actually have in the water, it’s impossible to get insurance,” said Terry.

In his initial outreach efforts, Terry got a notice placed in the East Coast Shellfish Growers Association’s newsletter. Days later, he had 35 farmers calling him. “We hadn’t even mapped out what the product was,” said Terry. “It was clear that we had tapped into something.”

After visiting more than 50 oyster farms over the past several months, Terry noticed varying degrees of efficiency. The questions the farm managers wanted answers for, like how often their oysters should be tumbled or what activities their employees had been completing, were things that Oyster Tracker could help them figure out by analyzing the data they inputted. He said the app can help them determine which seed performs better on their leases, which equipment is the best fit for the farm and what stocking densities are optimal.

“These are big-money decisions that farmers make that they really have little data on today,” said Terry.

Say a farm has a million oysters in the water, typically experiences a 40 percent mortality rate, and hopes to charge 50 cents apiece at harvest – they figure to earn $300,000. If they use the app to its fullest potential and can bring mortality rates down by just 5 percent, he said, that’s an extra $25,000 in their pockets. “This is with relatively small changes. These numbers make a big difference. We’re creating great intel.”

In return, the oyster farmers he’s lined up have proven to be just as eager to help improve the technology.

“The product we launched [last year] is nothing like what we have now. We evolved quickly,” he said. Oyster Tracker was a top-six finalist in two competitive business accelerator programs – MassChallenge and Cleantech Open. All of this training and input has led to the creation of a reporting suite that makes it easy for farmers to track inventory, employee activity, harvests and losses in real time.

“It’s streamlined everything,” said Robinson. “Before it was all on paper and on white boards hung throughout the factory. Now I don’t have to worry about it – it’s all digital. I can even look at it at my house, whereas before I had to be at the factory.” Madhouse Oysters expects to have 2.5 million oysters in the water this year, with plans to increase to 10 million five years from now.

Terry said Oyster Tracker also has room for substantial growth, estimating there are 2,300 farms in the United States alone and about 160 in Ireland, where he was able to land his first overseas customer, Harty Oysters in Dungarvan. He’s even gotten a verbal commitment from a grower in the United Arab Emirates.

Hibernia and The Bay

Despite the down-and-dirty nature that often describes oyster farmers’ work, Terry said they’re embracing this new technology as it allows them to spend less time deciphering hand-written notes and constructing spreadsheets that can be hard to understand.

“Nobody gets into oyster farming because they want to sit behind a desk,” said Terry. 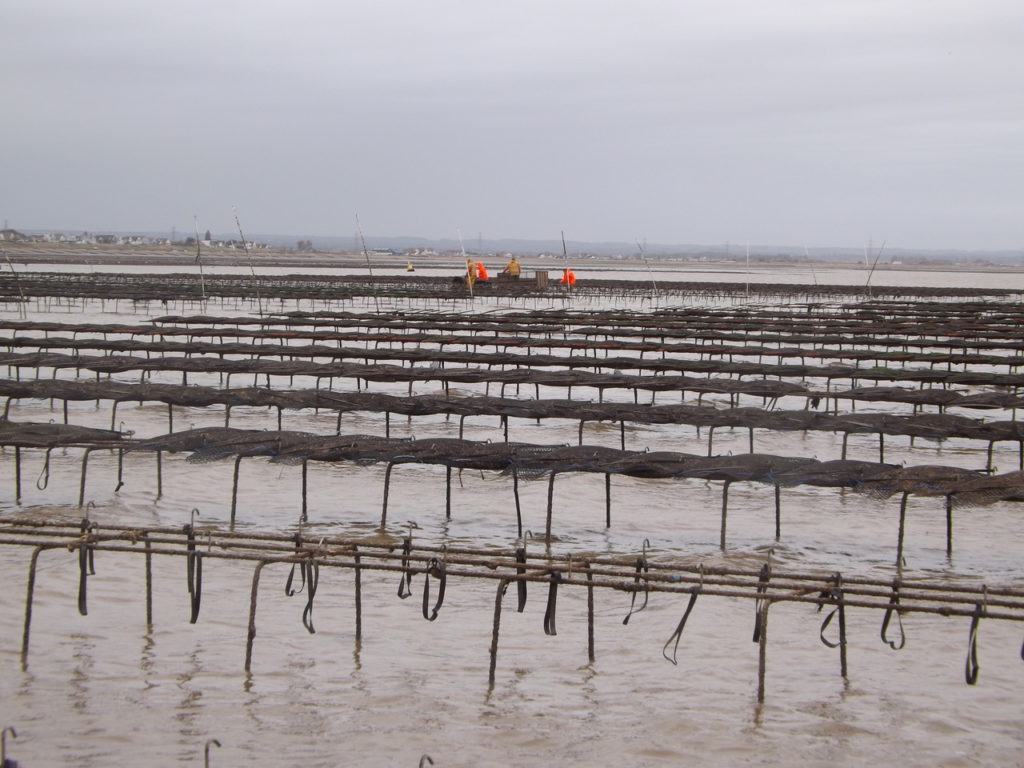