Leaning on aquaculture, Oysters For Life and the Billion Oyster Project take steps to rebuild livelihoods and educate youth

One billion. It’s a big number, when it comes to money. But with shellfish, it’s just a drop in the bucket.

“A billion oysters is not that many,” explained Peter Malinowski. As co-founder and director of the Billion Oyster Project, an education, marine science and environmental restoration project in New York Harbor, he should know. “If we stock oysters at 5 million per acre on 200 acres of reef, it sounds like a lot, but if you look at a map of New York City, Governors Island is 172 acres, and you barely see it.”

And that is why the initiative, launched two years ago by the New York Harbor School on that 172-acre island across the bay from the Statue of Liberty, is so noteworthy. It is a small step in the restoration of the city’s waterways, and using the next generation as a catalyst for change. Many of the students planting oysters in the waters south of Manhattan are learning that this area, the Lower Hudson Estuary, was once home to one of the largest oyster populations in the world, with 350 square miles of oyster beds.

A similar objective is occurring 250 miles south on the Eastern seaboard in Chesapeake Bay where W. Tolar Nolley, founder of Oysters For Life, is working to improve the health of a body of water that was also once rich with the briny shellfish.

“It was one of the world’s largest suppliers of oysters in the late 1880s. They were harvesting 120 million pounds, between Maryland and Virginia, a year,” he said. “There is so much in the history of the oyster. It is literally the foundation of our nation and our nation’s growth … The oyster has the most incredible story to tell and it needs to be told.”

Nolley, who has become a proud ambassador for the animal following the Deepwater Horizon oil spill in the Gulf of Mexico in April 2010, exudes an infectious passion for the environment. “I had just returned from South Africa where I had lived for about a decade and it struck me, all this environmental devastation,” Nolley said.

So the former real estate developer and pharmaceutical rep embarked on a new career in aquaculture.

“Deepwater Horizon led me to realize that Virginia had been importing oysters from Louisiana for the last 30 years because the Chesapeake Bay seafood industry had imploded back in the ‘70s,” he said.

Mission to restore the Chesapeake

Nolley’s mission was to return the Chesapeake back to its glory using oyster farming through a model that sustains and creates jobs while improving the health of the region’s waters.

The public is encouraged to participate in these efforts through a membership program that includes a one-time fee of $175. That money underwrites the equipment costs for cages that Tolley said are a barrier to entry for farmers. In return, members receive two dozen fresh-packed oysters harvested in the Chesapeake once a year for 10 years. They also have access to additional oysters at co-op prices.

Those jobs are going to roughly 3,000 watermen who are all part of a co-op, each agreeing to purchase the initial seed and harvest them. “We want them to be independent and brand their companies, brand their family tradition and brand their oysters,” Nolley said.

Success can be seen in those like Little Wicomico Oyster Company; its product is being distributed to Maryland, New York and Massachusetts and was tasted at this year’s Seafood Expo North America in Boston. “Chesapeake Bay oysters are back,” exclaimed Nolley.

The oyster has the most incredible story to tell and it needs to be told.

The oysters being grown in the bay are triploids (three sets of chromosomes), which produce at a much faster rate – 9 to 14 months to mature – than diploids. Through this approach, Nolley said, his company is able to “take pressure off native wild oysters using triploids to accelerate oyster growing for the consumer market.”

This allows diploids to be tied to the restoration of the bay. As part of that restoration, a percentage of revenues are being put back into a living memorial oyster reef that is expected to be launched in the bay this month.

The power of oysters

At present, Nolley said Oysters For Life has restored 16 million oysters in the Chesapeake and he expected that to grow to 50 million by the end of this year. Despite their diminutive nature, each one is making a significant impact on the environment. “A three-inch oyster can filter up to 50 gallons of water a day,” Nolley said. “That is a powerful tool.”

In New York City, it’s a tool being used not only to address pressing environmental concerns, but to foster a love of math and science in middle school students all the way through high school, using aquaculture as the impetus. It all started at the Harbor School, which was founded in 2003 in Brooklyn to provide high schoolers with a college-preparatory education, all while connecting them to the marine environment that surrounds their city.

Four years later, Malinowski met the school’s founder, Murray Fisher, and proposed the idea of the school growing and restoring oysters in and around its new home on Governors Island. In the process, a curriculum was developed that allowed students to focus on a variety of related disciplines that included aquaculture, marine biology, marine research, professional diving, ocean engineering and vessel operations.

A three-inch oyster can filter up to 50 gallons of water a day. That is a powerful tool.

From there the Billion Oyster Project was born, allowing the Harbor School to partner with 50 other schools throughout the city in an effort to provide hands-on learning opportunities for students while better understanding the benefits of placing oysters into the harbor. Those partner institutions visit restoration sites where they assess the oysters and monitor their survival rates, study each site and its conditions and measure water quality.

Meanwhile, Harbor School students continue to have a direct impact on the resurgence of oysters in the city’s waters, overseeing their growth from larvae into mature adults. None will ever be harvested – the students’ oysters will remain in the harbor, serving as a mechanism towards environmental progress.

So far the efforts are paying dividends. “In the last eight years we’ve been working in New York Harbor, there’s been a lot of visible improvement,” Malinowski said. “The harbor is in the middle of a renaissance as the water is getting cleaner, we’re getting rid of legacy pollutants and all this life is coming back.”

For Malinowski, the most rewarding part of the Billion Oyster Project has been instilling a level of knowledge, excitement and passion for aquaculture in the children who are doing the work.

“My favorite moments are when our students are speaking to a group of adults,” he said. “They are speaking to them as experts about really complex things and really impressing adults who are not expecting teens to have that level of mastery and ownership of that type of content. It is really exciting to see the confidence that can come from young people.” 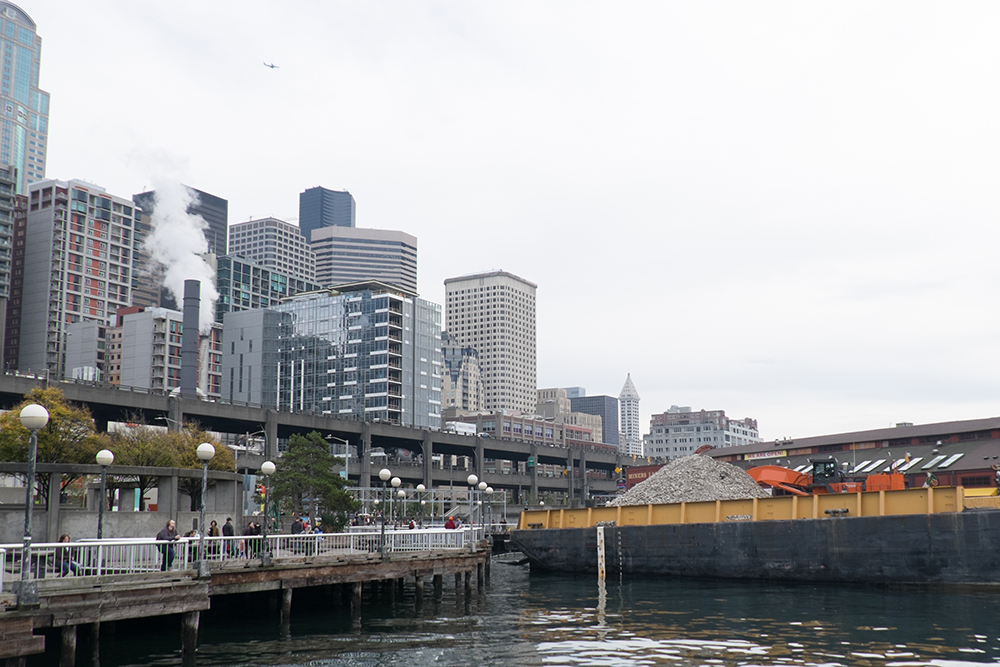 We built this city on oyster shells

When Seattle decided to rebuild the seawall separating its waterfront from Puget Sound, it turned to a bivalve byproduct for a unique, environmentally friendly material for an hospitable marine habitat. The city wanted its design and materials as pragmatic and beneficial for its underwater residents as for those using the parks, paths and services above ground.