Oysters are a natural filtration system and an important component of many healthy coastal ecosystems because their active filtering can help improve and maintain water quality. They are often referred to as the “canary” of the estuaries, as oysters will quickly provide evidence of many environmental issues.

It has been reported that oysters help subsidize the cost of chemical filtration, and where sewer systems require a cost of $500 to $1,000 per pound of nitrogen removed, oysters lower the costs to only $5 per pound. In addition, oyster shells have a high calcium content and can be crushed and used as mulch in gardens. Calcium creates stronger, healthier plants and balances the pH level of the soil.

Various oyster species can be cultivated in many areas, and maintenance of natural oyster beds and new and improved aquaculture practices can assure a continuous supply of this sustainable and renewable resource. Oysters are predominantly harvested in waters up to 3 miles from shore and are managed by relevant fishery/aquaculture management programs. Current limitations to oyster culture are typically associated with the availability of clean coastal waters that can comply with stringent standards for harvest of approved products; and outbreaks of natural oyster diseases.

Oysters are packed with nutrition

Oysters are complete proteins, which means they contain all the essential amino acids. There are various recommendations regarding protein consumption, but in general the advice is that women should get at least 46 grams and men should aim for 56 grams of protein daily. A serving of 6 to 9 oysters contains 14 grams of protein, and 600 percent of the recommended daily intake of zinc. This essential trace element boosts the body’s immune system, helping with illness prevention.

Oysters are complete proteins, which means they contain all the essential amino acids.

And due to the zinc content, oysters are also said to have a libido-boosting effect, hence the reputation about oysters being an aphrodisiac. We must not forget that back in the 18th century, noted lover Casanova – who in his memoirs reportedly admitted seducing 122 women – was said to eat 50 oysters for breakfast. Over the years, various studies have analyzed bivalve molluscs – the shellfish group that includes oysters, mussels, scallops and clams – and found they are rich in uncommon amino acids which trigger increased levels of sex hormones.

Several years ago, Dr. George Fisher – a professor of chemistry at Barry University in Miami – and his team, partly funded by the United States National Institutes of Health, studied bivalve molluscs. They used a process called high-performance liquid chromatography to identify quantities of amino acids, and they found two unusual ones: D-aspartic acid and N-methyl-D-aspartate.

Another researcher, Dr. Antimo D’Aniello, had discovered in earlier experiments that injecting these amino acids into rats triggered a chain reaction of hormones that ended with the production of testosterone in males and progesterone in females. “Yes, I do think these molluscs are aphrodisiacs; if the male is having difficulties, he has to eat a lot of mussels or oysters,” Dr. D’Aniello reportedly said. The scientists stressed that the oysters must be eaten raw to be most effective.

Oysters are also rich in vitamins C and B-12, and are loaded with selenium and iron. The B-vitamins are energy-releasing vitamins, as they break down carbohydrates for energy. Oysters are very high in B-12, also known as cobalamin, and they contain moderate amounts of riboflavin and niacin. A serving of 6 to 9 oysters provides well over 300 percent of the recommended daily intake of B-12, 13 percent of riboflavin and 11 percent of niacin. As B-vitamins are water soluble, they will leave the body, so it is important to eat foods rich in B vitamins throughout the day.

Folic acid, an essential B vitamin

Folic acid – also known as Folacin, Folate, Pteroylglutamic acid and vitamin B9 – is essential for numerous bodily functions, and oysters are a good source. We need folic acid to synthesize and to repair DNA, and it is especially important in aiding rapid cell division and growth, such as during infancy and pregnancy. Children and adults both require it to produce healthy red blood cells and prevent anemia. Even a slight deficiency can lead to lots of health problems.

Humans cannot produce their own folic acid, so it must be supplied through the diet to meet daily requirements. This vitamin occurs naturally in many foods, and you will often hear about its connections with dark green leafy vegetables, but rarely will it be mentioned that oysters are one of the best food sources for natural folic acid (and other molluscs also rate highly). Over the years, various governments have been urged to press ahead with mandatory fortification of bread and flour with folic acid, in a bid to reduce some developmental issues in fetuses. I believe it is time for the seafood and medical industries to promote the consumption of molluscs like oysters as an important source of this important vitamin.

Oyster bars – also known as oyster houses, oyster saloons or raw bars – are foodservice locations that have been around since the 18th century and specialize in serving only the freshest, tastiest oysters available. The oyster bar industry is expanding and some entrepreneurial oyster industry people are expanding their operations directly to consumers. In New Orleans, for example, it is reported that oyster bars are the fastest-growing activity in the food scene and there are similar operations starting up inland as well as on the coast.

There is a significant opportunity at these establishments to educate the public about oyster aquaculture and its environmental and nutritional benefits. Just as wine has been promoted through taste/area, oysters can take the same direct approach. Because oysters feed by filtering the waters in which they are grown, their taste will vary (salty, earthy, etc.) and reflect the distinctive environments of those waters.

Good marketing operators will acknowledge this fact, and will ensure their oysters are marketed with names associated with their harvest location or region. Examples in the United States would be along the Eastern Atlantic coast and Gulf of Mexico, where the common Eastern oyster (Crassostrea virginica) may be sold as Wellfleet Oysters (Cape Cod), Blue Point Oysters (New York and Connecticut), Chesapeake Bay Oysters (Maryland and Virginia), Apalachicola Bay Oysters (Florida) and SW Pass Oysters (Louisiana). The common Pacific oyster (Crassostrea gigas), ubiquitous on the West coast, is sold as Fanny Bay Oysters (British Columbia), Willapa Oysters (Washington), Umpqua Oysters (Oregon) and Hog Island Oysters (California).

Millennials represent an important portion of the oyster consuming population, but many are not so interested in shucking their own, understandably, because an oyster and a knife can be a dangerous experience. But they do not mind having a quick feed of oysters with a glass of bubbly or even a stout as a good healthy snack, and companies like Taylor Shellfish Farms (in operation since 1890) are accommodating them.

For those that cannot consume raw oysters, there are many ways to have them cooked. Fried oyster po-boy sandwiches, oyster shooters, oysters served in a Bloody Mary and grilled or charbroiled.

Oysters provide important, natural filtration of water and help maintain water quality in many estuaries around the world. Various species are farmed throughout the world, and oyster aquaculture is increasing in many areas of the world. Cultured oysters are an important food resource for many coastal communities, and are excellent sources of protein and amino acids, and are packed with important nutrients like zinc, selenium, iron and B-vitamins.

If you are looking to get an interesting perspective about the history of oysters, then a great source would be the book “The Big Oyster: History on the Half Shell” by Mark Kurlansky. You can read about New York and how oysters were so crucial to the city’s history. 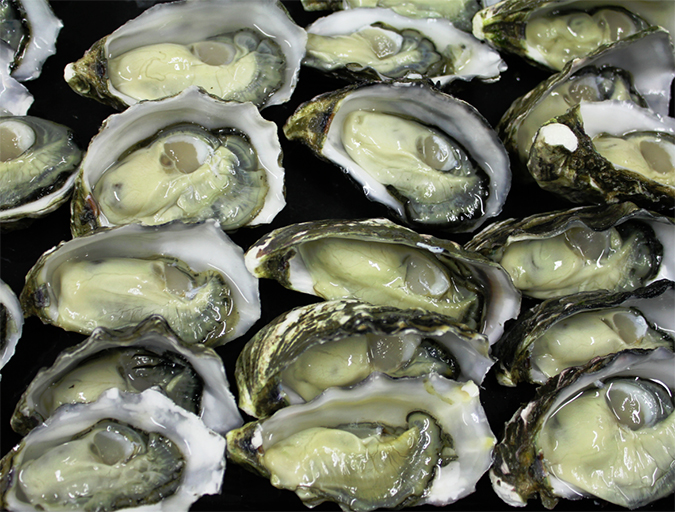