There is no scientific evidence that suggests genetically modified (GM) salmon will pose a significant risk to the “health of both consumers and fisheries,” as one prominent U.S. senator has stated. Those are the conclusions of FactCheck.org, a nonprofit consumer advocacy group that is a project of the Annenberg Public Policy Center of the University of Pennsylvania.

In the March 23 article “False Claims About Frankenfish,” author Vanessa Schipani said the fears expressed by Sen. Lisa Murkowski (R-Alaska) and others regarding GM fish is “unfounded.” Murkowski has vehemently opposed the U.S. Food and Drug Administration’s November 2015 approval of AquaBounty Technologies’ new animal drug application for the production, sale and consumption of its GM AquAdvantage salmon.

Murkowski vowed to block confirmation proceedings to the nominee to be FDA commissioner, Dr. Robert Califf, on the Senate floor if the agency did not address her longstanding concerns to require that any GM be labeled as such at points of sale. The Senate confirmed Califf as the FDA’s new commissioner in February; Murkowski had lifted her opposition.

Earlier in March, the U.S. Senate blocked a bill from Sen. Pat Roberts (R-Kansas) that would require food manufacturers to label products with genetically modified organisms. The FDA ruled that AquAdvantage fish would not need to be labeled as GM if and when it becomes available to retailers. The ruling is in line consistent with the agency’s position on foods from genetically modified crops, like soy.

And most recently, on March 30, a group of 11 environmental groups filed a lawsuit against the FDA for over its decision to approve AquaBounty’s GM salmon, saying the agency failed to properly assess the risks, particularly with production expected to expand in the future. The Center for Biological Diversity, Food and Water Watch, Center for Food Safety and the Ecology Action Center are among those who filed the suit, which does not name AquaBounty as a defendant.

“FDA’s decision is as unlawful as it is irresponsible,” said George Kimbrell, senior attorney for Center for Food Safety and co-counsel for the plaintiffs, which also included consumer health and recreational fishing interests. “This case is about protecting our fisheries and ocean ecosystems from the foreseeable harms of the first-ever GE fish – harms FDA refused to even consider, let alone prevent. But it’s also about the future of our food: FDA should not, and cannot, responsibly regulate this GE animal, nor any future GE animals, by treating them as drugs under a 1938 law.”

“AquaBounty is confident that the approval will stand, and that the FDA has been extraordinarily thorough and transparent in the review and approval of our application,” AquaBounty CEO Ron Stotish said in a statement.

The production of AquAdvantage fish will be limited to land-based facilities (and is currently limited to two facilities, one in Canada and another in Panama), according to the FDA’s November ruling. Murkowski and other critics fear that GM fish, if they manage to escape into the natural environment, would interbreed with wild stocks, causing them harm. FactCheck.org contends that geographic, physical and biological confinement would greatly limit the likelihood that GM salmon could impact wild salmon populations.

Because the fish are rendered sterile, the article stated, they can’t interbreed with wild salmon. And since all the fish are female and can’t produce eggs, they can’t “trick wild females into thinking they had successfully reproduced.”

The greatest potential for risk to the environment would be due to “nefarious diversion or freak accident (e.g., plane crash),” David F. Senior, an emeritus professor of veterinary medicine at Louisiana State University, told FactCheck.org.

Additionally, even if fish raised in the Panama facility were to somehow find their way to the ocean, they would be unable to survive in the oxygen levels at that latitude of the Pacific Ocean, Senior added.

“In short, Murkowski’s and others’ claims that [genetically engineered] salmon will negatively affect wild salmon populations are unfounded,” the article stated. “But by implementing physical, geographical and biological barriers, the GE fish’s threat to the environment is limited.”

FactCheck.org also looked into numerous claims about GM salmon’s nutritional value and potential health risks the product may pose to consumers, including allergens. The FDA, while admitting it is impossible to guarantee the “absolute harmlessness of the use of any substance,” ruled that AquAdvantage salmon was safe to eat after a lengthy approval process in which it analyzed the risks associated with eating the fish as direct and indirect effects.

Calls to Sen. Murkowski’s press office for comment have not been returned.

Dave Conley, director of corporate communications for AquaBounty, told the Advocate that the company “had no prior knowledge or involvement with the article, but we are glad that an independent organization has examined the false statements made about our salmon and corrected the record.” 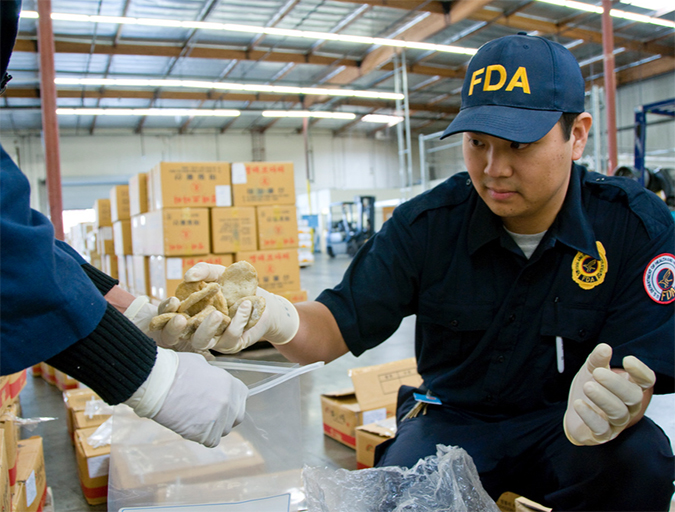 Drug-related import refusals at U.S. ports were up in 2015 for the third straight year. Representatives from the National Fisheries Institute and the Food and Drug Administration discussed U.S. aquaculture drug policy at Seafood Expo North America and how the supply chain can avoid problems.