Recent decades have seen a plateau of wild-capture fisheries coupled with rapidly increasing demand for seafood and escalating threats such as global warming and ocean acidification that place oceans, and particularly coral reefs, in unprecedented peril. A recent study commissioned by the United States National Oceanic and Atmospheric Administration (NOAA) estimated the reefs of the U.S. state of Hawaii are worth nearly $34 billion per year for conservation, recreation and seafood.

Alternatives to harvesting wild fish for consumption and aquarium supply are urgently needed to help protect this invaluable resource. Further, as the trade of aquatic organisms for home and public aquariums has become a multi-billion-dollar industry, and approximately 30 million fish are harvested yearly from reefs worldwide, the poorly managed and likely unsustainable collection of these species has recently come under much scrutiny.

In Hawaii, the reported annual collection and export of 300,000 to 400,000 yellow tang (Zebrasoma flavescens) – 81 percent of all aquarium catch by species – has elicited a number of bills before the state legislature seeking to end this practice. The culture of this species bears significant importance to Hawaii and represents a considerable economic opportunity and critical conservation strategy.

Due to the recognized importance of developing alternatives to wild collection, the Oceanic Institute in Waimanalo, Hawaii, undertook efforts to culture yellow tang in 2001 with financial support through the Center for Tropical and Subtropical Aquaculture, NOAA Hawaii Sustainable Fisheries Development project and NOAA Marine Aquaculture Program.

However, as with many other coral reef species, the work proved challenging for a number of reasons. The first major bottleneck encountered was the establishment of a consistent egg supply. Although the authors successfully obtained natural spawns from yellow tang broodstock shortly after acquisition, most of the eggs were infertile or failed to properly complete embryonic development.

The second major challenge faced was developing a suitable larval-rearing system for newly hatched larvae. Yellow tang eggs share many characteristics with other pelagic spawning reef fish, such as rapid embryonic development in under 22 hours. The 1.5-mm larvae are also much smaller than other fish species cultured to date at the Oceanic Institute, including the flame angelfish successfully cultured in parallel projects. This makes yellow tang highly sensitive to the physical attributes of the larval-rearing system.

Following hatching, the largely undeveloped and positively buoyant yellow tang larvae spend the first day at the tank surface and then begin to inhabit the water column as they complete mouth and eye development prior to first feeding.

Part of the challenge in working with these tiny, fragile larvae was the need to develop small-scale, specialized larval-rearing tanks engineered to maintain excellent water quality while providing a minimally turbulent environment. These replicated systems allowed important prefeeding survival parameters to be determined and now support excellent early larval survival that enables the generation of large numbers of larvae through the critical first-feeding period.

The next challenge was identifying a suitable feed for the 2-mm first-feeding yellow tang larvae. Although most coral reef species cannot be cultured using conventional hatchery feeds such as rotifers and artemia, the research team was previously successful in overcoming feeding hurdles with similarly challenging larvae through the identification of a local calanoid copepod, a Parvocalanus species. Its very small and highly nutritious nauplii stage is used to successfully feed and rear these fish through the first few weeks of life.

Despite this achievement with other species, the same methods had limited success when applied to yellow tang larvae, with the larvae often failing to feed and subsequently dying of starvation. However, through a combination of improved egg quality, selective use of copepod eggs and their smallest naupliar stages as prey items, and an improved larval-rearing system targeting the hydrodynamics of the rearing environment, the yellow tang larvae were stimulated to feed.

This was an exciting milestone, as to the authors’ knowledge, this was the first time anyone had reared yellow tang larvae generated from captive broodstock utilizing only cultured prey. The only other documented account of attempted yellow tang larval rearing utilized eggs stripped from wild adults and feeding with zooplankton collected as needed from the ocean. Although the latter method yielded some larvae out to day 40, the results were never repeated, indicating a more controlled approach is still warranted.

Following the initial success with first feeding, early rearing efforts were further challenged by feeding rates that were quite low and often highly variable. These issues were overcome through the use of improved tank lighting and darker (black) experimental tanks along with use of a gentle upwelling water delivery system. Through these refined methods, the authors routinely observed over 80 percent of the larvae exhibiting full guts upon microscopic examination four and five days post-hatch.

Once feeding well, the larvae exhibited significant changes in size and appearance as they continued to actively feed and grow. Notable changes included alterations in body shape at day 7, deepening in the head and body musculature at day 10, and growth and continued deepening of the anterior region, along with rapid growth of protective spines from dorsal and pectoral fins, from day 12 onward.

The utilization of copepod-based, hatchery technology developed under multiple, parallel projects over the past decade has led to the successful rearing of yellow tang larvae through the critical first few weeks of development. Although the egg supply and first-feeding bottlenecks have been largely overcome, high mortality in the weeks following first feeding remains a constraint.

Therefore, efforts are currently focused on continued development of live feed supplies (particularly the n1 and n2 stages of copepods), improving the survival of the post-first-feeding yellow tang larvae and sequential work through subsequent mid- and late-larval stages to complete the life cycle of this species in captivity.

The successful development of this technology will ultimately provide opportunities to diversify aquaculture production in Hawaii and assist in the protection of threatened fisheries, including the coral reef ecosystem in Hawaii and the Pacific Islands. 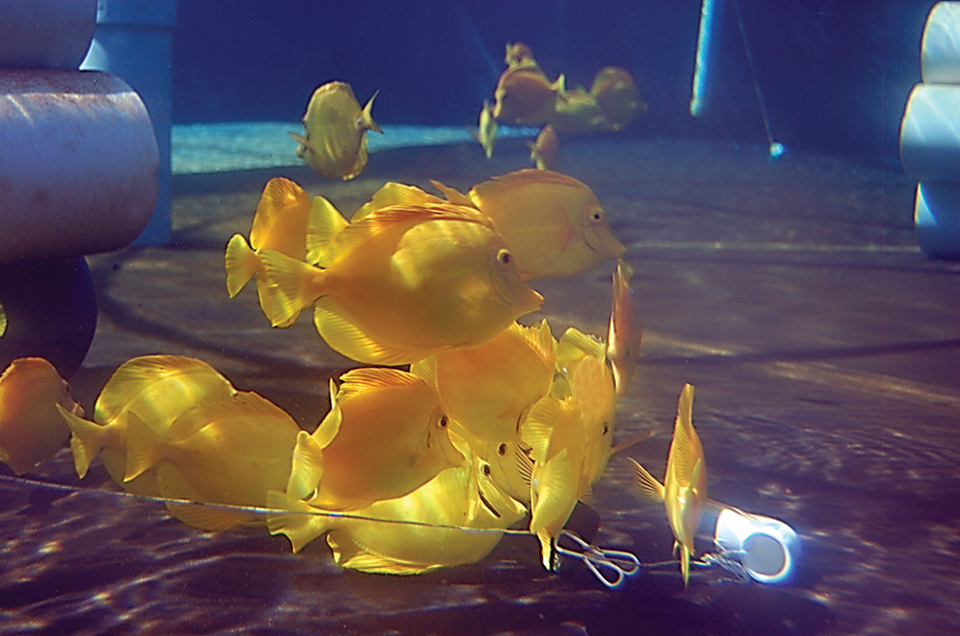 The Oceanic Institute of Hawaii Pacific University has been working to develop methods to culture yellow tang, a top species collected for the aquarium trade. The fish under culture are living longer as practices improve.