As reported in the first part of this article, new aquaculture feed ingredients and processes are figuring prominently in the production of more-nutritious and better-balanced “specialty feeds” for shrimp culture. Part 1 discussed the role of brewer’s yeast and beta glucans in this trend. Other new ingredients are discussed in this second and final article.

Interest in the nutritional importance of polyunsaturated fatty acids (PUFAs) has increased markedly during the past decade, and there is growing consensus that omega-3 and omega-6 fatty acids are essential nutrients during the development of shrimp. Much of the evidence is based on physiological measurements, since PUFAs are necessary components of cell membranes and many cell-signaling systems.

On the other hand, deficiencies in dietary PUFAs have been correlated with poor growth, low vitality, and/or disease. Experiments have concluded that shrimp have no or a limited capacity to synthesize either docosahexaenoic (DHA, 22:6 omega-3) or eicosapentaenoic (EPA, 20:5 omega-3) fatty acids from shorter-chain fatty acids. Thus, these essential fatty acids must be supplied by diets. The main issue has been the important function of linoleic (18:2 omega-6) acid to serve as a precursor substrate to produce active metabolites.

Arachidonic acid (ArA, 20:4 omega-6) is considered an essential fatty acid for penaeid shrimp. The free acid is very important as the precursor for biosynthesis of prostaglandins, thromboxanes, and hydroxyeicosatetraenoic acid derivatives including leukotrienes.

Within cells, arachidonic acid is found in an esterified form as a major acyl component of membrane phospholipids (especially phosphatidyl inositol). Its release from phospholipids is thought to be the limiting step in the formation of its active metabolites. Important to note is that most ArA-derived mediators, especially prostaglan-din and leukotrienes, are involved in immune responses. In addition, ARA is important in cell communication.

Whether the addition of long-chain polyunsaturated fatty acids, and more recently ArA, to shrimp feeds benefits the growth and survival of shrimp has been a matter of significant discussion. Glencross and Smith (2001) reported that the inclusion of ArA at levels of 0-12 grams per kilogram diet on a dry-weight basis resulted in a significant negative dose response to growth. This negative response has been explained in terms of competitive inhibition by substrate preference when EPA and DHA are also present. Indeed, the interaction between omega-3 and omega-6 acids must be considered in concert with the interactive effects of ArA.

In order to determine the origin of ArA, some novel in vivo and in vitro experiments have been developed using the bioconversion capacity of radioactive alpha-linolenic acid. The results showed that no conversion of these two fatty acids into ArA and EPA occurred, although both acids can be detected in the stomach contents of wild animals.

Moreover, when shrimp were fed artificial diets rich in either linoleic acid or alpha-linolenic acid, a sharp decrease of ArA and EPA was observed in vitamin- and mineral-deficient treatment groups. Even when the animals were fed diets with added minerals and vitamins, the same effect was observed after longer treatment times.

In addition, larval development can be improved by supplementing diets with certain microalgae that contain high levels of ArA. A mix of algal diets can promote faster growth and higher survival of shrimp larvae than single algal diets, and there is some evidence that ArA can be used as a growth promoter.

Biologically active substances such as ribonucleic acids (RNA), which affect the immune states of organisms as immunomodulators and interferonogens, are of considerable interest in studies of shrimp diseases, breeding, and aquaculture. The acids’ biological activities are mediated through their effect on different constituents of the immune system for protection against various microbial and viral pathogens. One method used to increase resistance to viral infection is the induction of interferon based on synthetic and natural double-stranded RNAs.

The formation of nucleotides is very time- and energy-consuming. Therefore, the external supplementation of nucleotides in feed helps save time and energy. Nucleotides can carry chemical energy in their easily hydrolyzed acid-anhydride bonds and combine with other groups to form enzymes. They are also used as specific signaling molecules in cells. It has been postulated that nucleoproteins in feed degrade to nucleic acids and nucleotides in animals’ intestinal tracts.

Nucleotides can be partially absorb-ed in the gut, and most are absorbed as nucleosides. In the gut, nucleosides are recombined with phosphoric acids to nucleotides and nucleic acids, and enter the blood for transport to different organs for the formation of new cells. The concept behind their use is that when shrimp are provided with a dietary source of nucleotides, their immune system can more rapidly respond to a pathogen challenge, because they do not have to spend time and metabolic effort to synthesize nucleotides that produce copies of DNA needed when cells divide.

Seaweed meals, particularly from various kelp species, provide trace minerals and vitamin A, and increase the palatability of shrimp feeds. Dried uni-cellular algae like Chlorella, Spirulina and Scenedesmus are high in protein but also expensive for use in grow-out feeds. Of these, Spirulina is the most important. It is simple to grow and harvest, and highly nutritious.

Spirulina shells are composed of mucopolysaccharides, which are 85 percent digestible. Spirulina is 65 percent protein by weight and contains high concentrations of the antioxidant beta-carotene, iron, vitamin B-12, and the rare gamma-linolenic acid. Its dark green color is due to the combination of the phytonutrients carotene, chlorophyll, and phycocyanin. As a feed additive for cultured shrimp, Spirulina provides a special pigmentation.

Note: This article summarizes a presentation by the authors at the World Aquaculture 2003 conference in Salvador, Brazil. Cited references are available from the authors. 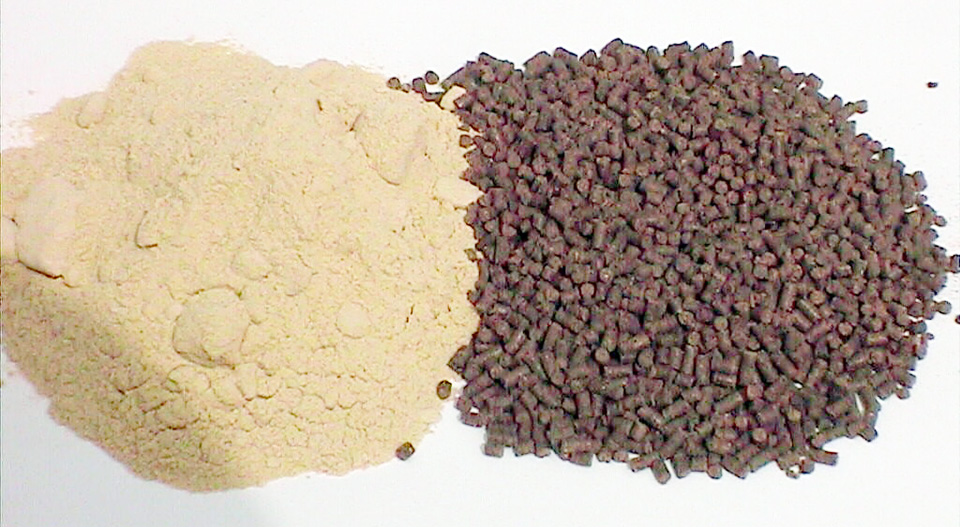 New ingredients and processes are figuring prominently in the production of more-nutritious and better-balanced “specialty" shrimp feeds. 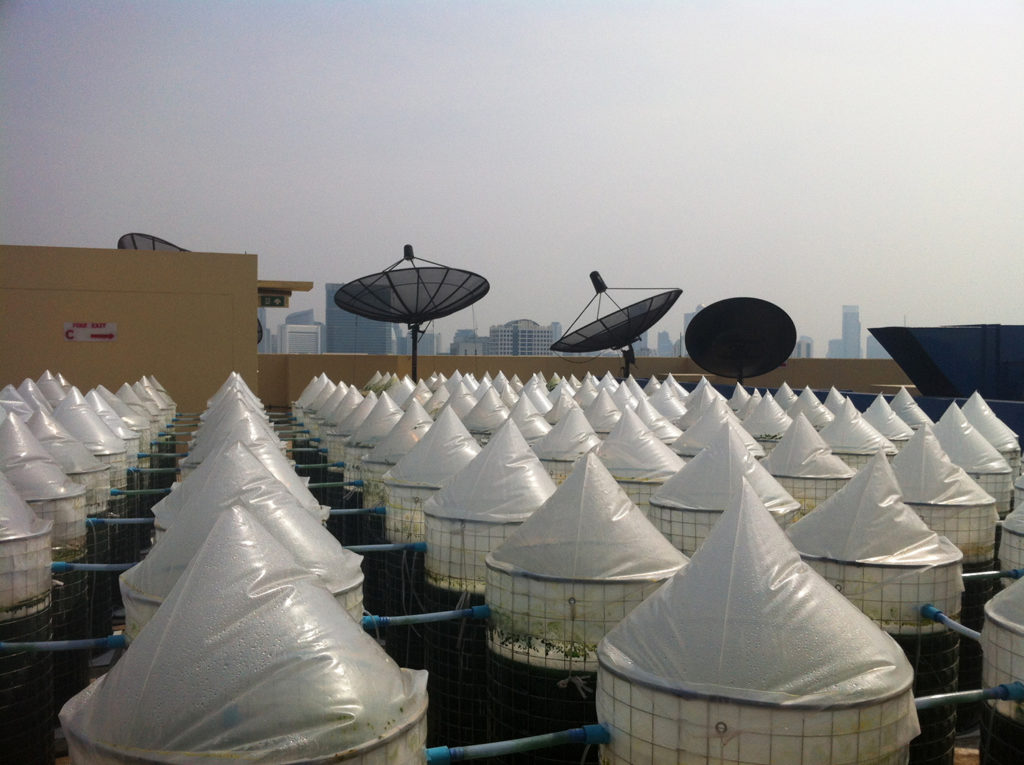 American engineer at helm of Thailand-based EnerGaia has a grand vision for spirulina, which he says has potential as a protein source for fish feed.