IFREMER has been involved in shrimp farming research and development since the Centre Océanologique du Pacifique was created in Tahiti in 1972. The first goals were to control the shrimp life cycle in captivity (1975) and to develop mass production technology (maturation, spawning, hatchery). Thematic programs in pathology, physiology and cytogenetics started in 1980. The breeding program was initiated in 1992. This new program has benefited from IFREMER’s 20 years of experience in shrimp experimental farming and the growing shrimp industry in New Caledonia and other French territories in the Pacific.

Among the numerous penaeid species which have been imported and tested in Tahiti, four were selected (Penaeus monodon, P. indicus, P. vannamei and P. stylirostris). From an historic and genetic point of view, the development of new techniques to control maturation, spawning and larval rearing opened the way towards domestication.

Domestication is in fact a spontaneous (and potentially uncontrolled) selection process for better performance under given rearing conditions: wild strains encounter living conditions (density, food, pathogens, salinity, temperature) in the rearing tanks and ponds which are completely different from those to which they are naturally adapted in the wild. The use of closed broodstocks implies that the reared animals are the offspring of animals which have been able to survive, grow, mature and spawn under these artificial conditions. At each generation, spontaneous selection occurs, leading to better and better adapted strains.

In this context, IFREMER has domesticated several strains (Table 1). They demonstrate good performance reducing their genetic variability may have occurred for some of these strains in the past when no genetic care was taken.

Although shrimp production in Polynesia and New-Caledonia is based on P. stylirostris, IFREMER has maintained up to now its domesticated strains of P. monodon, P. vannamei and P. indicus in its facilities. Tahiti can be considered as a sanctuary for these species which were kept isolated without any further importation of animals apart from the initial ones and also because of its location far away from large production areas which are chronically subject to diseases.

In fact, these domesticated strains could be of great interest for their breeding value and their health status: they could be used by a private foreign breeder to develop improved commercial hybrids. They could also be used as stabilized control lines because inbreeding has reduced drastically their genetic variability.

Although the exploitation of existing genotypes is the first genetic approach, the development of genetically improved strains requires specific tools.

The first one is an efficient rearing technology which allows rearing of numerous batches (full-sib families, half sib-families or multi-parental batches) in the same conditions and at the same time in order to use effectively enough broodstock at each generation and maintain genetic variability. The problem can be quite easily solved for animals bigger than 1 gram which can be tagged by the injection of a colored elastomer and then mixed in the same pond. But in hatchery and in pre-growing tanks, the problem is more complex as the animals are too small to be physically tagged.

IFREMER has developed hatchery technology in small tanks in which the environment is precisely controlled. It has also developed genetic markers (10 microsatellites on P. stylirostris; three microsatellites on P. monodon) which could be used to determine the pedigree of animals belonging to several families and mixed together in the rearing tanks.

Cryopreservation of sperm is another tool which can have many uses in shrimp breeding: protection of selected strains, transfer and diffusion of strains through gametes, easy schedule of mating, selection on criteria which implies destructive tests, etc. Penaeids are an interesting but difficult model because their spermatozoids are not motile, and because cryoconservation must preserve not only their fertilization capacity but also their adhesive ability in order to allow artificial insemination. IFREMER’s sperm refrigeration technology (temperature = 0 to 4 degrees-C) has already proven its efficiency up to seven days as refrigerated sperms of wild males caught in Ecuador allowed the recent importation of genetic variability into Tahiti through quarantine facilities. This technology is being refined while work is still going on to determine the best freezing medium and protocols to enable long term conservation.

Lastly, to develop selection programs, the geneticists need precise and stable parameters which can be measurable on a large number of candidates. Beyond growth, which is the most “classic” parameter used in animal genetic improvement, producers are more and more looking for disease- resistant strains. The SPR43 (IFREMER’s P. stylirostris strain resistant to IHHN virus) is one example of what genetics can bring to producers. Some immune factors could become selection criteria in the future when the number of routinely assessed candidates will not limit the selection intensity.

Up to now, the best genetic way to improve the resistance of a population to a specific pathogen remains the selection of the surviving candidates to strong infectious challenges. IFREMER has invested in disease challenge rooms and has developed infection protocols, especially with Vibrio penaecida which is responsible for mass mortalities of P. stylirostris in New Caledonia during the cool season (Syndrome 93).

An experiment on mass selection for growth started in Tahiti six generations ago. The fourth and fifth generations of the selected line have demonstrated respectively a 18 percent and 21 percent increase of growth at commercial size when compared to a non-selected control line (Fig 2).

The sixth generation is currently being compared for growth performance and conversion rate. The program is now in its optimization phase to determine the best moment at which the selection for growth should take place. Some elements show that early selection could be an efficient strategy as it should lower the cost of selection and allow an increase of the selection intensity. A new experiment was started in 1999 to compare the respective efficiencies of early and late selection.

The New Caledonian industry should benefit from these results and a genetic improvement program will be integrated into production facilities in 2000.

In Tahiti, some individuals of P. stylirostris have a green-colored tail. Although this is not a commercially valuable trait, its fixation in a stabilized strain would provide the geneticist with an easily identifiable control line which could be mixed in the same tanks with other lines. The second generation already shows green-tail rates ranging from 50 percent to 75 percent, the objective being to produce 100 percent green tails.

Selection of a strain resistant to vibrio penaecida (Syndrome 93)

The feasibility of selection for resistance to a pathogen has been demonstrated by the SPR43, which is resistant to IHHNV. In 2000, a selection based upon standardized challenges to Vibrio penaecida will start in New Caledonia. The first generations will be reared at an experimental scale, but positive results would lead to quick distribution to producers.

Molecular biology results show a significant relation between heterozygocity and growth and argue for the development of inbred strains which could be exploited to produce heterozygote hybrids to benefit from some heterosis phenomenon. This strategy is going to be assessed in comparison with a more classic strategy which consists in selecting the broodstock among a population in which inbreeding is avoided as much as possible. To start this experiment, the available genetic variability among the Tahitian P. stylirostris population has been increased in 1999 through the use, under quarantine conditions, of sperm from wild Ecuadorian males.

Genetic improvement for better growth and better resistance to disease can be an efficient way for the shrimp farming industry to become more competitive and more reliable. Although interesting results have already been obtained, further developments are expected in the coming years. Other research orientations are still to be explored such as the potential use of inbreeding in a shrimp improvement program.

IFREMER is now focusing on P. stylirostris and on topics which can be directly used by the New Caledonian industry. However, foreign breeding programs for species other than P. stylirostris could take advantage of IFREMER’s results in terms of methodology and know-how.

In addition, the three domesticated strains (P. monodon, P. vannamei and P. indicus), which are still maintained in Tahiti under favorable sanitary conditions, may be of high interest for development of commercial hybrids or as control lines. 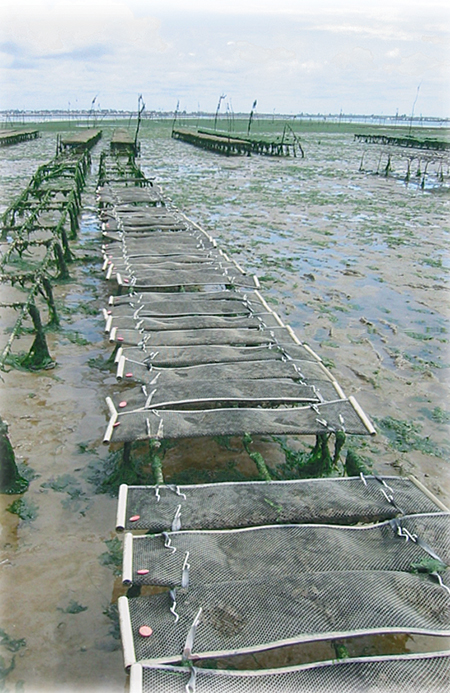 Shrimp farming in New Caledonia has an important economic impact, through exports and by providing jobs in rural areas.