The president of India’s Society of Aquaculture Professionals details the industry’s growth amid infrastructure, disease and marketplace challenges

Modern shrimp farming commenced in India in the late 1980s, driven by a growing global appetite for shrimp, government policies to promote seafood exports and several corporate entities providing capital to build hatcheries, farms and processing plants. It was based predominantly on the black tiger shrimp (Penaeus monodon) and to a lesser degree the Indian white shrimp (Fenneropenaeus indicus).

The growth of the sector was severely impacted a few years later when the White Spot Syndrome Virus (WSSV) arrived on India’s shores and the Supreme Court of India, heeding the pleas of environmental activists, restricted shrimp farming in coastal waters. It took an act of the Indian Parliament to restart shrimp aquaculture and the phase of growth that followed was marked by the development of independent hatcheries and farms of less than five hectares owned or leased by numerous small farmers. The species of interest continued to be the black tiger shrimp but there was also a significant production of the freshwater prawn (Macrobrachium rosenbergii).

While volumes continued to rise through the mid-2000s, a stagnation was reached in the latter half of the decade due to disease problems, slowed animal growth and size variability. For broodstock, the sector relied on wild-caught black tiger shrimp, which meant that exclusion of pathogens was extremely challenging and breeding for performance was simply impossible. Taking note of the experience of other major Asian producers, India decided to introduce Specific Pathogen Free (SPF) Pacific white shrimp (Litopenaeus vannamei) in 2008. The country introduced the species cautiously by allowing a few selected entities to conduct an experimental import and perform trials, on which rules for further imports were framed and implemented.

To date, L. vannamei broodstock can only be imported from approved sources and quarantined in a government-run facility upon entry into the country. Development of broodstock multiplication centers is being allowed now and the government has expressed its interest to allow entities that can complete the lifecycle of L. vannamei within India in a fully contained and highly biosecure facility and produce broodstock locally.

India’s shrimp farming growth after the introduction of SPF L. vannamei has been phenomenal (Fig. 1). Farms previously culturing the black tiger shrimp experienced a boost in productivity due to higher stocking densities, lower incidence of diseases and animal growth rates that were comparable to those of black tiger shrimp up to 20 grams or even beyond. Farmers switched to SPF L. vannamei swiftly and today more than 90 percent of Indian shrimp production is for this species.

India was spared of the Early Mortality Syndrome (EMS) disease – also known as Acute Hepatopancreatic Necrosis Disease, or AHPND – that devastated many Asian producers and Mexico; Indian producers conversely saw significant gains in production from 2013 to 2016. Investments were made in new hatcheries, feed mills and processing plants to support the expansion of farming areas.

The southeastern coastal state of Andhra Pradesh has been the anchor of aquaculture in India. Its land and water resources and entrepreneurial farmers have made it No. 1 in farmed freshwater fish and marine shrimp production over the last three decades. While black tiger shrimp have been produced in low-salinity waters in some of the districts of Andhra Pradesh, vast expansion of shrimp production occurred in these districts in the last decade by way of constructing new ponds or using ponds previously used for fish farming. Shrimp farming also expanded in other states, notably in the states of Odisha and West Bengal that are north of Andhra Pradesh on the east coast, and in the northwestern state of Gujarat.

India went into a lockdown in late March 2020 to contain the coronavirus pandemic. Many farmers panicked and harvested their shrimp while shrimp processing plants – facing cancellation and postponement of purchase orders, possible shutdown of the factories and migrant workers returning to their homes – had challenges in receiving the harvested shrimp.

As a result, shrimp prices crashed. Cancellation of international flights meant that SPF broodstock could not be brought in throughout April. While many of the challenges were eventually resolved, one issue that is having a lingering effect is the shortage of workers. Many working in the sector predict that India’s shrimp production would decline by about 20 percent, to 620,000 metric tons (MT) in 2020.

On the supply side, diseases continue to be the primary challenge to the productivity and profitability of shrimp farming in India. While WSSV is frequently detected, many farmers feel that it can be managed, and they do not feel as threatened by it as in the past. On the contrary, the occurrence of new diseases such as White Feces Disease and Running Mortality Syndrome are dreaded more because their causative agents have not yet been identified. The presence of the microsporidian parasite Enterocytozoon hepatopenaei (EHP), which results in the slow growth and size variation of shrimp, is also not definitively established.

One of the responses of the shrimp farming community to these new diseases is to deploy nurseries where shrimp postlarvae (PLs) can be stocked at high densities and reared to about 0.5 to 1 gram each in size and then transferred to grow-out ponds. However, this method also carries the risk of pathogens infecting the shrimp in the nurseries and spreading to the farms. Thus, biosecure facilities and practices are required for the nurseries to fulfill their purpose of deployment.

On the demand side, marketplace diversification is high on the list of requirements. Nearly half of India’s shrimp goes to the United States and about one-quarter went to China in 2019. To reduce the overdependence on these two markets, India needs to increase its market share in other markets, particularly the European Union and Japan, each of which accounted for nearly one-third of India’s exports in the P. monodon days.

Through extensive campaigning and stringent monitoring, the presence of antibiotic residues has been reduced significantly in India’s shrimp supply, boosting its appeal to global markets. India’s domestic market for shrimp consumption remains small at less than 50,000 MT per year; stimulation of this market could lead to a significant increase in consumption. The rising urban middle class, the large population of young people, the convenience of cooking shrimp and the perceived health benefits of seafood are being leveraged to create a high value domestic market for shrimp in India.

India remains a competitive supplier of value-added shrimp to the world due to its low cost of labor and the scale of economy it has managed to achieve by becoming one of the largest global producers of farmed shrimp. The established capacity of hatcheries, feed mills and processing plants will support future expansion.

Compared to the major suppliers of shrimp in Asia, India has largely remained as a low-density producer, with a standard of about 40 shrimp per square meter widely adhered to. The country, therefore, can produce large shrimp. Indian farmers are highly interested in the production of bigger shrimp, especially that of black tigers, for improved profitability. However, growing to bigger sizes with good survival has become a Herculean task, needing the attention of broodstock producers as well as farm managers. In the northern states like Gujarat – where climatic factors restrict shrimp culture to a mostly one crop a year – farming of black tiger shrimp is seen as a viable option.

The government has recently approved the import of SPF black tiger shrimp into India and postlarval SPF black tiger shrimp are already available in the market. India’s future in shrimp production will depend on its ability to maintain its competitiveness in value addition, market expansion and application of production technologies that can keep diseases under control and help strengthen the industry.

Author acknowledgement: I am grateful to many in the Society of Aquaculture Professionals who read the first draft and provided useful feedback and also supplied most of the photos. Most data came from the Marine Products Export Development Authority, and other from industry sources. 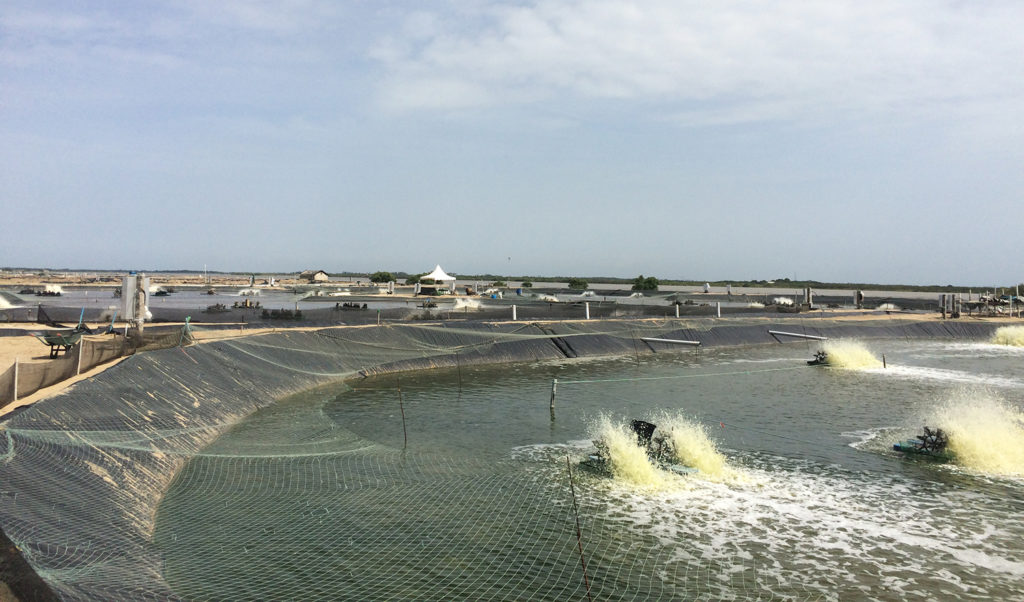 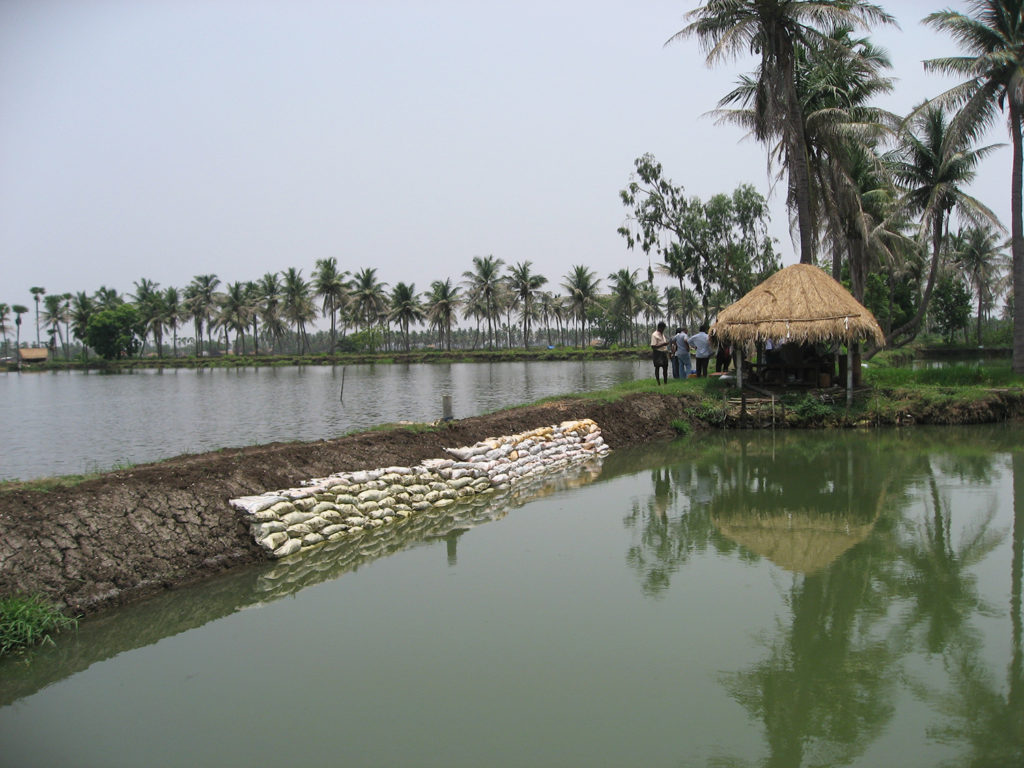 The fish farming industry of India

India is the second-largest producer of farmed freshwater fish with potential for further development as new species and production systems are adopted.