Currently, 112 countries and territories produce seafood in the marine environment, with earnings reaching $65.4 billion in 2013 from the mariculture sector and representing 43.5 percent of the total aquaculture income. Given mariculture’s significant contribution to seafood supply and the economy, various attempts are being made to estimate the potential to expand aquaculture in the ocean. Information on area potentially suitable for mariculture could be useful for planning ocean-based activities (e.g. energy production, shipping, marine protected areas).

Several environmental and socioeconomic factors influence the sustainable development of mariculture. Most mariculture involves growing fish or invertebrates in nets or cages that are submerged, allowing for free water exchange with the surrounding marine environment. Farmed species’ survival and growth rates are directly influenced by natural environmental conditions that consequently affect the suitability of an area to farm these species. However, a number of other factors play an important role in determining the actual production capacity and its sustainability.

An important first step towards better describing the ocean environmental spatial extent for sustainable mariculture production potential is the identification of marine areas that offer suitable environmental conditions for currently farmed species. Environmental preferences of (farmed) marine species can be approximated and mapped using species distribution models (SDMs). This modelling approach consists of quantitatively describing the relationship between a species’ observed occurrence records and various parameters that describe its environment. Such relationship can be developed using historical occurrence records of the species in both the natural and farmed environments. SDMs can be applied to predict species’ distribution in the past, present and future.

This article – summarized from the original publication – had the objective of predicting the spatial extent of area that is suitable environmentally for mariculture by applying four species distribution models to quantify the environmental niche of the presently important farmed species and project their habitat suitability index (HSI) over the global ocean based on current environmental conditions.

Our study focused on coastal and open water farming systems only. Based on the predicted HSI, we calculated the total area of the world’s exclusive economic zones (EEZ) that is suitable for farming marine species. We examined the variation among models and compare it with the mean predictions across models to highlight where predictions were most robust to variations. We then evaluated model projection uncertainties and estimated the total area that would be suitable for mariculture. Finally, we discussed the implications of our results for future mariculture development.

For biotic data, we used a list of farmed species from the Sea Around Us mariculture database (SAU), derived largely from the Food and Agricultural Organization (FAO) database, with augmented information from national statistics to subdivide annual mariculture production by sub-national units (e.g., provinces, states), in addition to countries and taxa, for the period 1950 to 2010.

We extracted the species’ names of all fish and invertebrates reported in the database (307 in total). Records that are not reported at the species level (i.e., with genus and species specified) were excluded from our analysis. Following the minimum occurrence data requirements for SDM, we only retained species that occurred in more than seven sub-national units.

To obtain representative spatial distribution of each farmed species and quantify their environmental niche, we developed two databases, including one with the natural occurrence records (i.e., from the wild) for all 102 species from a number of open source databases, and for each species, we removed duplicate records of occurrences among databases and records for which geographic information was not available.

We then predicted the habitat suitability for each farmed species on grids of the global ocean using species distribution models (SDMs), and then calculated the total suitable mariculture area for the 102 farmed species considered for each model and derived an overall multi-model weighted average. We also calculated the number of species that were predicted to be suitable for mariculture in each spatial cell and compared the spatial distribution of potential mariculture area and species richness of the 20-farmed species with the highest cumulative production from 1950 to 2010.

By using an ensemble of SDMs, we were able to explore the structural uncertainty of the predicted mariculture species distributions and environmental suitability. Projections from some models showed considerable variation vs. others, but the multi-SDM approach explored the uncertainty due to discrepancies among models, thereby capturing the full range of potential suitable marine areas for mariculture.

The relevance of the set of environmental factors identified by the modelling algorithms applied here to best predict mariculture areas are supported by empirical knowledge. For example, the physiology of farmed species is affected by changes in temperature. Optimal temperature determination for farmed species growth is important practice in mariculture. In addition, oxygen is an important factor affecting the growth of fishes, and dissolved oxygen level is an important consideration in determining the holding capacity of fish farms. Salinity influences the growth of some of the farmed species, and primary production and suspended particulate organic matter are food sources for molluscs, and their concentration is expected to affect the growth of farmed molluscs.

Our conclusion about the area suitable for mariculture and its limitation for its utilization for mariculture operations agree with a related study (https://scholar.google.com/scholar?q=Mapping+the+global+potential+for+marine+aquaculture+Gentry+2017) that employed different methods to estimate the global potential area for mariculture. The use of multiple approaches to predict suitable mariculture area should be encouraged so that the uncertainties associated with such predictions can be better characterized.

Regionally, our results show that the difference between the predicted environmentally suitable area for mariculture and the extent of current mariculture activities is largest in Africa, the Caribbean and along the Atlantic coast of South America. These regions are predicted hotspots for mariculture species richness (60 percent of the 102 species), yet actual mariculture operations appear to be relatively limited, accounting for only 1.3 percent of global mariculture production. Factors such as poor economic conditions, lack of supporting infrastructure, political instability, limited foreign investment in the sector and inadequate value chain linkages in many countries of these regions may have impeded mariculture development.

China, in contrast, is presently using the largest extent of its suitable area for marine aquaculture. The country has a long history of aquaculture, going back 2,500 years. Owing to the late 1970s economic reform initiatives, China’s aquaculture industry has benefited from open market policies. In addition, the fact that China accounts for one- quarter of the global fish demand has made the country’s market suitable for expansion. However, farm expansion might exert more pressure on wild capture fisheries as China’s aquaculture industry accounts for one- third of global fishmeal production.

Concerns regarding the broader environmental sustainability of mariculture may limit the sector’s expansion. Particularly, the expansion of farming carnivorous species will increase the demand for fish resources in feeds, adding to the stress on forage fisheries and also other non-selective trawling. While successful partial replacement of fishmeal with plant and other sources (e.g. insects, yeast and algae) has been tested and used in aquafeeds, there are still challenges remaining for using fully plant-based feed sources, particularly for high value species such as Atlantic salmon. High quality plant-based ingredients used in feeds must also in the long run be replaced by innovative resources not competing with human food.

Affordable and efficient technology can also contribute to the sustainable expansion of mariculture. Significant advances have been achieved in land-based systems designed to reduce nutrient load discharges and farmed species escapes, as well as improve disease management. In coastal finfish and shellfish mariculture systems, a variety of cages are being developed to withstand high wave actions and reduces escapes in offshore areas; advances that will be necessary given predictions of increased storm activity in the future.

For crustaceans, such advances are lagging behind and a number of significant hurdles will need to be overcome for these to become operational. In addition, integrated multi-trophic aquaculture systems (IMTA) where lower trophic level species, such as seaweed and bivalves, are farmed together with finfish maximize inorganic and organic nutrient waste recycling, thereby reducing the environmental footprint of mariculture farms. While these systems hold much promise, large commercial IMTA farms are still uncommon.

Strong environmental governance is also needed to regulate and ensure the sustainable development of mariculture. Aquaculture activities are regulated by law in many countries (e.g., Canada, China, Norway and the Philippines. Effective monitoring and enforcement are imperative if mariculture expansion is to be sustainable in the future. However, the monitoring and enforcement varies considerably among countries. Countries such as the United States, Australia, Canada and the E.U. have also adopted formal codes of conduct whose main objective is to promote the responsible development and management of aquaculture with appropriate sanctions.

The high correlation for individual species predicted HSI between mariculture location and natural occurrence in this study, suggests that mariculture farms are sensitive to changes in environmental conditions driven by climate change or other anthropogenic activities such as pollution. Ocean warming may drive environmental conditions beyond the suitable range for mariculture and will cause thermal stress for a number of currently farmed species (e.g., cod, oysters).

However, these rising temperatures may extend the growing season for some species and may provide opportunities to farm new species, or species that are currently economically marginal in the affected areas. Also, shellfish aquaculture is sensitive to ocean acidification, as lower carbonate saturation state in the water can make it more difficult for calcifying invertebrates to produce shells. Carbon emissions may thus have a substantial impact on the distribution and diversity of potentially suitable farm sites for currently farmed species.

In our study we identified a large, global, environmentally suitable area for mariculture. We suggest that other non-environmental factors such as technological, economic and social constraints play a fundamental role in determining mariculture production in these regions.

While, our approach is useful in defining areas on a broad scale, more detailed studies on the “ecological suitability” (i.e., in terms of carrying capacity) will be required to further constraint the prediction of suitable area for mariculture development. Also, these currently suitable areas might transition to being unsuitable in the future due to human activities such as pollution, coastal zone activities, and climate change.

Future studies should include other human uses of marine areas e.g. ship routes, wind farms etc. and their potential competition with mariculture to further characterize the suitable areas for farming. Moreover, given the importance of seaweed farming in various regions, future studies should also collate data and information about seaweed mariculture locations and extend all analyses to seaweed.

It will also be important to investigate and address the main constraints in sustainable mariculture development to help develop pathways that ensure the continued contribution of mariculture to global seafood production. 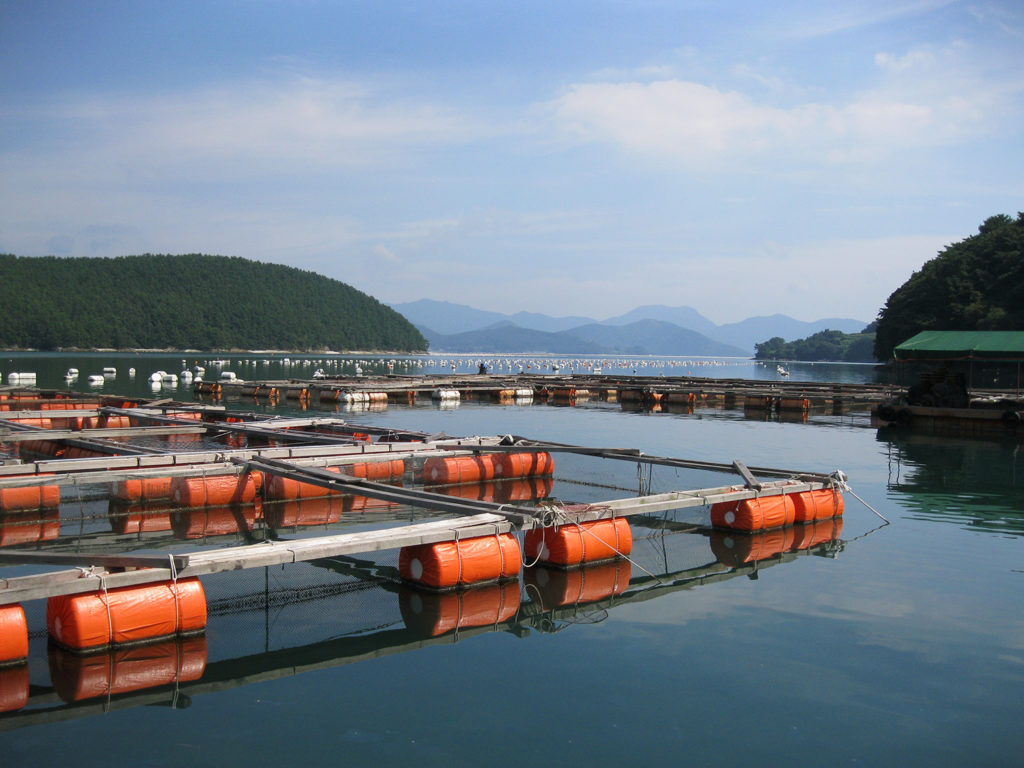