Foam fractionation is an efficient water treatment process used to remove dissolved organic compounds, proteins, and small particles from waste water. The technology is commonly used in seawater aquarium purification, but less often in commercial aquaculture because of the relatively high cost of equipment and installation, and other factors.

Foam fractionation is effective for the depuration of bivalves before marketing, and in general to improve the water quality in aquaculture ponds. With current aquaculture trends toward reduced and even zero water exchange in grow-out production systems, efficient, easy-to-use, floating skimmers that improve water quality are an important technological development.

In aquaculture, foam fractionation involves the use of a protein skimmer to remove dissolved organic compounds from aquaculture systems. The technology removes many waste products in recirculating aquaculture systems (RAS), including carbon dioxide, animal feces, ammonia, and complex organic substances from decomposing feed, fish slime, metabolic byproducts, urea, algae, and phenols. Many of the latter affect animal growth and health, so their efficient and prompt removal is important in RAS.

A number of foam fractionation system designs are used, all of which function in a similar fashion. Typical designs involve a tube with a collection cup on the top and a water return tube. They work by injecting large amounts of very fine air bubbles into the tube through a high-pressure water pump and air valve to create foam. When the bubbles rise, dissolved organic compounds are adsorbed and entrapped in the foam, which moves to the surface and is expelled through a discharge tube or into a holding chamber and eventually discarded.

The SKIM is a new cyclonic counter-current skimmer design developed in the author’s laboratory and patented by Ifremer with financial support from the Conseil Régional des Pays de la Loire. It was optimized in cooperation with the Italian company Acqua&Co, a specialist in water aeration for aquaculture.

The skimmer involves a 1.1-kW electric air-water injector and two chambers placed in a 1.0-by-1.5-meter polyester cylinder. It is designed to work with a high 100 cubic meters per hour rate of water flow, which creates a significant current effect in the pond or tank where it is placed. The new skimmer unit floats and can be used immediately without pipe connections except a tube or hose needed to extract the condensed foam.

The new skimmer has numerous commercial applications. It is being used in fish and shellfish production in various locations around the world.

An intensive (9 to 18 kilograms per cubic meter, depending on temperature) brackish water tilapia production system operated by Baghanem Corp. in Bahra, Saudi Arabia, uses 400-cubic-meter concrete tanks with one skimmer unit and a propeller circulator. Water is only added to balance losses due to evaporation. With this technique, total energy costs and water consumption have been reduced, and the resultant dried foam is used to fertilize trees around the fish farm and develop a green area in the desert.

A system developed by Edulis Distribution in La Rochelle-Pallice, France, includes a tank with 30 cubic meters of 27-ppt seawater pumped from the sea, a skimmer and plastic containers that hold mussels. The completely closed system operates for three months with the same water, which is controlled at temperatures of 9 to 12 degrees-C.

The source areas of the mussels dictate that the mussels must be depurated before being considered fit for human consumption. This system cleans and processes 9 metric tons (MT) of mussels per week, producing a wholesome class A final product with 90 percent of analyses under 230 E. coli per 100 grams.

A control tank was equipped with a Venturi aerator with water flow of 50 cubic meters per hour, switched on for 15 minutes each 45 minutes. Another tank used a skimmer with continuous 100 cubic meters per hour flow. The trial was carried out at 13 ± 0.5 degrees-C in tanks stocked with 15 kilograms per cubic meter of cockles contaminated at 2,850 E. coli per 100 grams. Salinity was 35.5 ppt.

A study carried out by the Ifremer Research Center in Marine Ecology and Aquaculture used a prototype SKIM skimmer at three commercial farms to evaluate the water treatment effect of a skimmer used for one hour in different aquaculture systems. The systems included a nursery for sea bream (Sparus aurata); intensive grow-out of sea bass (Dicentrarchus labrax); and a stocking per depuration tank for oysters (Crassostrea gigas), located in a polluted, deep-water harbor.

Tests were carried out during the winter at 5 to 10 degrees-C with low water exchange and feed input in the sea bass tank, and no exchange or feed in the oyster tank.

Total suspended solids (TSS) concentrated by an average factor of 225 (Table 1) were removed at a rate of 1 to 3 percent per hour. Particles smaller than 20 µ were removed preferentially.

Best treatment results were obtained in the fish tanks, where TSS levels were highest. Dissolved organic material, expressed as dissolved organic carbon (DOC) was concentrated in the skim-med foam by an average factor of 24.

New easy-to-use protein skimmers combine oxygen input by aeration and output of specific compounds which are usually difficult to strip from culture water, such as proteins, amino acids, phosphates, small particles, and bacteria. Skimmers can be used to efficiently replace aerators in some aquaculture ponds or tanks, and water exchange rates can also be reduced. 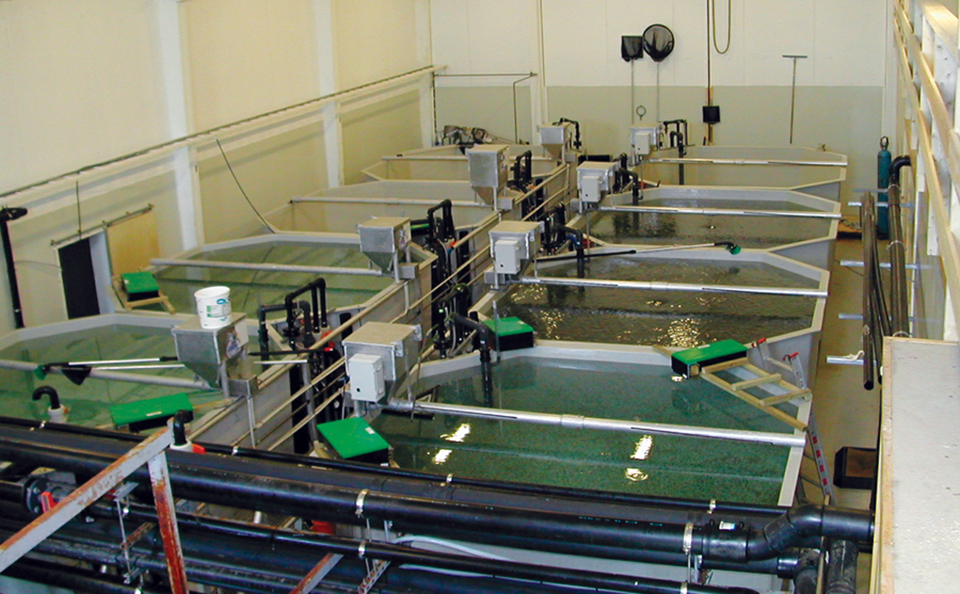 Clay particles present an alternative to water treatments with microalgae or algae paste in the culture water of marine fish larvae. 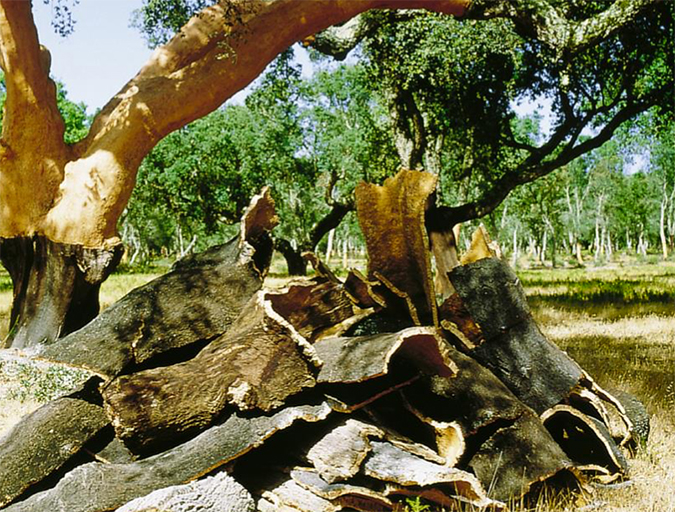 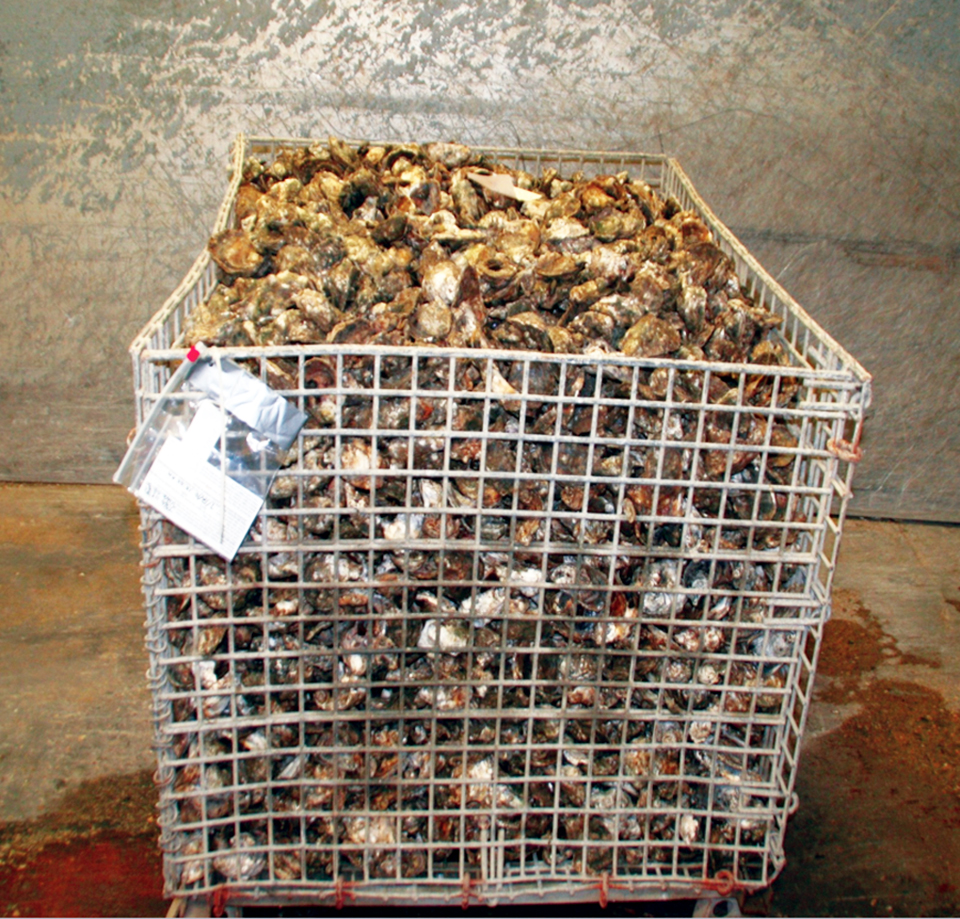