Biofloc technology is a resource-efficient aquaculture production system that supports better use of basic natural resources, such as fresh water and land, and aquafeeds. The addition of organic carbohydrate (CHO) to the biofloc system provides an energy source for microbial organisms to convert ammonia or nitrate into microbial biomass. This process helps to lower ammonia and nitrite levels, thereby reducing the need for water exchange. At the same time, the generated microbial biomass serves as natural food for the cultured species and increases feed use efficiency. Biofloc systems also benefit immunological responses of Pacific white shrimp (Litopenaeus vannamei) against infectious agents.

Potential CHO sources may include simple ones such as molasses, glycerol and glucose, and complex ones such as flours and starches. Different CHO sources result in different nutritional values of the biofloc. In addition, they have varying effects on the composition of the microbial community in the biofloc, the production, and the immunity of the cultured fish and shrimp. The underlying mechanism for some of these differences may lie in the complexity of CHO structure. These results altogether indicate the importance of selecting a suitable CHO for a successful biofloc technology system.

In biofloc technology, feed and CHO represent major sources of organic material entering the system. Following feeding, the oxygen consumption and ammonia excretion by fish significantly increase, creating high fluctuations in ammonia concentration on a daily basis. It is currently unknown how the carbon and nitrogen inputs are accumulated in different compartments (e.g. shrimp, biofloc, water) of the biofloc culture of L. vannamei, and further research on nutrient recycling in biofloc systems is still needed.

The experiment was carried out at the animal research facility of Wageningen University (Carus), the Netherlands. L. vannamei (0.075 ± 0.006 grams) juveniles were obtained from CreveTec in Ternat, Belgium, and stocked at the density of 250 shrimp per square meter into tanks in an indoor nursery system. The tanks had continuous aeration, temperature control, a 12-hour/12-hour dark/light regime and established biofloc.

The animals were fed twice per day with 34 percent commercial protein feed (CreveTec) at the feeding level of 8 percent body weight (BW) per day, and an assumed feed conversion rate of FCR of 0.7, reaching a maximum feeding rate of 43 grams per cubic meter per day. After feeding, corn starch and molasses were added immediately to their respective treatments. For each kilogram of shrimp feed fed, 0.6 kg of corn starch or 1.1 kg of molasses were added to maintain an input C:N ratio of 12.

For detailed information on the experimental design and system, and animal husbandry; sample collections and analyses; and data analyses, refer to the original publication.

The corn starch treatment resulted in significantly higher shrimp growth rate, production, average body weight and lower FCR compared to molasses addition. Water quality was stable on a daily basis, but changed over the weeks. Carbon and nitrogen accumulations in the system were not significantly different among treatments.

The survival percentage (90 to 96 percent) and specific growth rate (SGR), the increase in cell mass per unit time (8 to 10 percent body weight, BW, per day) of shrimp in this study were high and comparable to previous studies on L. vannamei shrimp nursery. We used a carbon:nitrogen (C:N) ratio of 12 for both treatments, and recommended for biofloc culture of L. vannamei shrimp.

The addition of corn starch yielded significantly better shrimp production, probably due to the more stable environmental conditions in the corn starch treatment, in particular the dissolved organic carbon and nitrogen compared to the molasses treatment (Fig. 1). Stable water quality reduces stress and improves growth and survival of cultured shrimp. Lower and more stable organic carbon and nitrogen concentrations in the water of the corn starch treatment suggest that the microbial community in the experimental system differed in composition and was more efficient than in the molasses treatment.

The two carbohydrate sources used in this research differed significantly in mineral content, especially in potassium. Previous research also reported that iron, potassium and manganese concentrations in molasses were approximately 17, 50 and 70 times, respectively, higher than in starches. Phosphate concentrations in the molasses treatment was also higher than in the corn starch treatment and previously reported values in conventional shrimp pond. But it is not clear if these differences contributed to the difference in shrimp growth among treatments. Overall, in addition to maintaining a suitable C:N ratio, the choice of CHO source is of major importance in biofloc technology, as different CHOs have different effects on biofloc nutritional content, microbial diversity and production of the cultured animals.

Biofloc protein content was higher than 390 g/kg dry weight in both treatments. The average biofloc concentration reached 434 mg per liter, presenting an extra source of nutrients for the cultured shrimp. The higher biofloc protein content observed in the molasses treatment likely resulted from the fact that molasses contains more protein on a dry weight basis (8.5 percent) than corn starch (0.3 percent), which was directly available to biofloc.

Periphyton production in our trial reached 22 to 46 grams DW per tank at the end of the experiment, with protein contents ranging from 19 percent to 24 percent. Periphyton protein content, similarly to biofloc protein content, was significantly higher in molasses treatment. There are few studies on the effects of carbohydrate type on periphyton, but periphyton nutritional values have been shown to be dependent on substrate type. The periphyton protein level in our study was comparable to the 25 percent reported by researchers for L. vannamei ponds and represented an extra source of nutrients for the animals.

The direct contribution of periphyton to intensive culture of L. vannamei shrimp has not been studied, but scientists have shown that promoting periphyton growth by substrate addition increased L. vannamei shrimp production in less intensive systems. We observed that shrimp grazed on periphyton, which in our system mostly grew on the tank wall at the water-air interface, so that maintaining a constant culture water level may increase the availability of periphyton for the shrimp.

Our data demonstrated that only 15 to 17 percent of carbon and 28 to 43 percent of nitrogen input remained in the system at the end of the experiment. The nitrogen accumulated in shrimp in the corn starch treatment of this research is comparable to that reported by other researchers. However, the total 43 percent of the nitrogen input accumulated in the tank was slightly more than half of the 80 percent accumulation of the nitrogen input reported elsewhere. The other 20 percent was assumed to be lost through denitrification and volatilization. From other researchers working in conventional culture ponds without CHO addition, 23 percent of carbon and 35 percent of nitrogen inputs (i.e. from feed and fertilizer) were reportedly assimilated in shrimp, indicating that our system was less efficient in carbon use compared to more conventional shrimp production systems.

Our results show that the choice of organic carbon source plays an important role in the success of a biofloc system. Corn starch was superior to molasses for enhancing the growth of L. vannamei shrimp juveniles. Once the biofloc is established, nitrogen waste can be efficiently controlled, resulting in relatively little diurnal fluctuation of nitrogen and carbon in culture water. However, the nutrient loss in biofloc systems, especially carbon loss is high, and ways to reduce carbon losses from culture systems should be explored. Also, further research is needed on improving nutrient use efficiency, either directly by the cultured animals or indirectly by trapping nutrients and making them available for other uses. 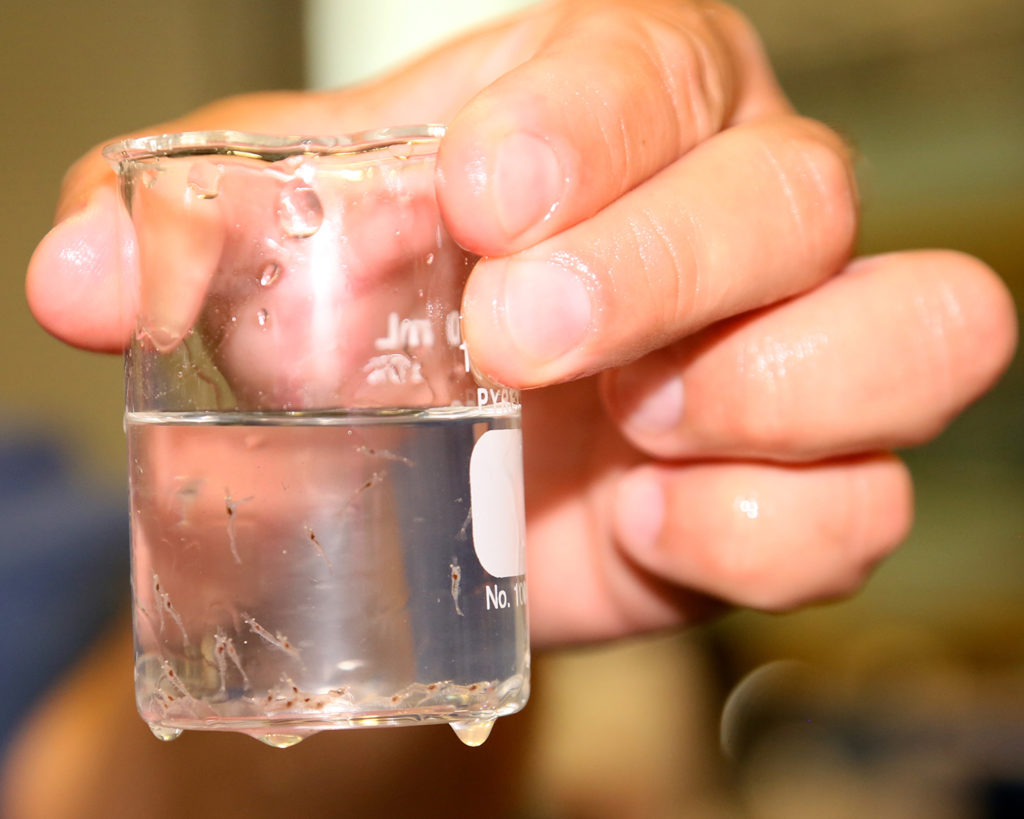 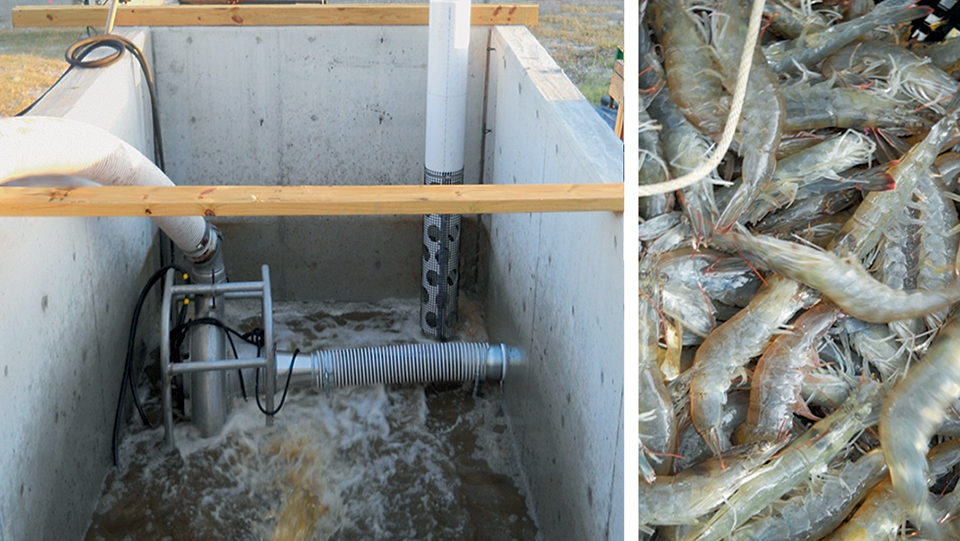 In ongoing trials of greenhouse-enclosed intensive biofloc shrimp culture systems, the objectives of a 2012 study were to evaluate the performance of fast-growth shrimp fed a commercial diet formulated for high-density culture systems, and to further evaluate injector performance in the zero-exchange, super-intensive raceways.