And the start-up costs in biofloc systems may be lower than other forms of RAS, because no external biological filtration is required. Often the only filtration used in BF systems is a solids filter to control accumulation of particles. A settling chamber is one inexpensive device for removing solids. These low-tech chambers include a central baffle to reduce incoming water velocity, allowing settleable solids to fall to the bottom where they can be purged from the system later.

Clear-water systems (CW) are another form of RAS that utilize intensive solids and biological filtration to remove solids and ammonia waste. But the increased filtration and energy consumption (for pumping and heating requirements) result in higher start-up and operational costs. Combining the positive features of BF and CW system types could provide the reliable bio-filtration of a CW system with the nutritional contribution of a BF system, and this hybrid (HY) system could be useful for indoor shrimp nurseries. Shrimp nurseries produce hardier juveniles, extend culture seasons, increase biosecurity and space use, and support higher yields during grow-out.

This article summarizes the original publication of this study, comparing biofloc, clear-water, and hybrid nursery systems in Pacific white shrimp production, water quality, and stable isotope dynamics. This research had two parts: one  examining differences in water quality and animal performance in three types of RAS nurseries (BF, CW, and HY) with tilapia; and this one describing the shrimp study. Both species are important candidates for intensive RAS production.

All tanks had a 10.2-cm (D) pipe with large holes cut into it wrapped with 1000-μm pore size mesh to prevent entry by the young shrimp. All tanks included one 25-cm (D) x 36-cm (H) settling chamber with a functional volume of 12 L of water. All tanks had a 15-cm ceramic diffuser receiving blown air to provide dissolved oxygen into the water and one 300-watt electric heater to maintain temperature.

Shrimp postlarvae (PL10) from a commercial hatchery in the Florida Keys were stocked, after acclimation, in the tanks at 3000 PL/m3(480 PLs per tank). On the first day of the study, shrimp had an initial mean weight and standard deviation of 7 mg ± 0.0. During the trial, PL were  initially fed at 12 percent estimated biomass and decreased to 3 percent over the course of the study. Growth and uneaten feed were visually assessed daily and used to guide feed rations.

During the study, shrimp were fed various commercial diets from Zeigler Brothers, Inc., PA, USA), including a liquid Artemia replacement diet. All tanks were fed three times per day at approximately 0800, 1200, and 1600 h and received the same amount of feed. Although CW shrimp may have consumed other items attached to the sides or bottom of the tanks besides the pelleted feed, it is unlikely they had access to any biofloc particles.

For detailed descriptions of the experimental system design and its management; shrimp husbandry used during the study; the bacterial establishment period; experimental treatments (biofloc, BF; clear-water, CW; and hybrid, HY); water quality monitoring and management, and stable isotopes; and data, management and statistical analyses, please refer to the original publication or the first author. Funding for this project (KYSU-000057) was provided from the U.S. Department of Agriculture’s National Institute of Food and Agriculture, Evans Allen Research Program. The authors are thankful to several members of the Aquaculture Production Sciences team at Kentucky State University for their technical assistance.

No significant differences were found between treatments for any of the shrimp production metrics. Survival ranged from 55 to 92 percent among the tanks; the BF treatment was numerically higher than the other treatments followed by the CW and the HY treatments. Likewise, mean harvest weight, total biomass (kg per cubic meter), SGR, and FCR were all numerically higher in the BF treatment but not statistically significant (Table 1).

Table 1. Shrimp production data for the three treatments generated during the study. The data mean ± SEM, and were compared using one-way ANOVA. No significant differences were found for any production values.

Temperature, DO, pH, and salinity all fell within suggested ranges for proper growth of L. vannamei. However, differences in DO, pH, and turbidity between treatments were significant.

Based on turbidity results, the foam fractionators were more effective at clarifying the water in the CW systems than the settling chambers were in the other two treatments. The results of this study suggest that reducing bacterial loads through increased solids filtration combined with heavily aerated biofilters like those in the CW and HY systems may help sustain higher oxygen and pH levels.

The BF treatment may not have benefited as much from the bacterial-establishment period as the other treatments. In contrast, the CW and HY external biofilters provided a high surface area, abundant oxygen, and less environmental fluctuations; which likely enhanced the growth performance of nitrifying bacteria while limiting potential TAN spikes.

Regarding stable isotope dynamics, the significantly higher N isotope values in the BF treatment suggest that shrimp in this treatment had different dietary sources of nitrogen than the other treatments. This corresponds with the large proportion of N in shrimp tissues that was attributed to biofloc. The contribution of carbon and nitrogen estimated by the isotope mixing model may help explain why the production values in the BF treatment were slightly better than in the other treatments. No significant differences were found between treatments with respect to shrimp carbon values, but the nitrogen shrimp tissue values were significantly higher in the BF treatment than in both the HY and CW treatments. We determined that the shrimp in the BF treatment received an estimated 87 percent of their carbon from the pelleted feed source, whereas 13 percent came from the biofloc (Table 2). The model indicated that the BF shrimp received approximately 66 percent of their nitrogen from the pelleted feed and 34 percent from the biofloc.

Table 2. Proportion of C and N in shrimp tissues from the biofloc (BF) treatment originating from the two potential food sources: pelleted feed and biofloc. Numerical values are rounded to the nearest tenth.

During the study, we added a total of 430 grams of sucrose to the BF treatment to control TAN. It is possible that the sucrose added to the BF systems may have forced the bacteria to assimilate more nitrogen, thus producing supplemental protein. Future research should investigate how to increase crude protein in the biofloc material. If the duration of the project were extended this may enhance microbial N accumulation, possibly improving water quality, and enhancing the nutritional contribution of biofloc to shrimp.

The overall shrimp production was similar for all treatments in our study. Based on our results – because of their lower start-up costs vs. other RAS (less external filtration is required) – shrimp producers should consider using BF systems for nursery production, Further, the shrimp in the BF treatment appeared to have received some of their diet from the biofloc material, which has in the past has resulted in improved nursery production.

The bacterial establishment period in our study was shorter in the CW and HY systems because of more thorough filtration, resulting in better water quality than in the BF system. But the additional filtration components – including the pump on the CW foam fractionators and the biofilter bio-media – are additional costs. The additional oxygen demand of BF systems may require more robust aeration which could add expense, which could be an important consideration for producers.

Overall, managers of shrimp nurseries should consider, when selecting a system, the potential for faster shrimp growth, consistency in water quality dynamics, and the costs of equipment and energy. 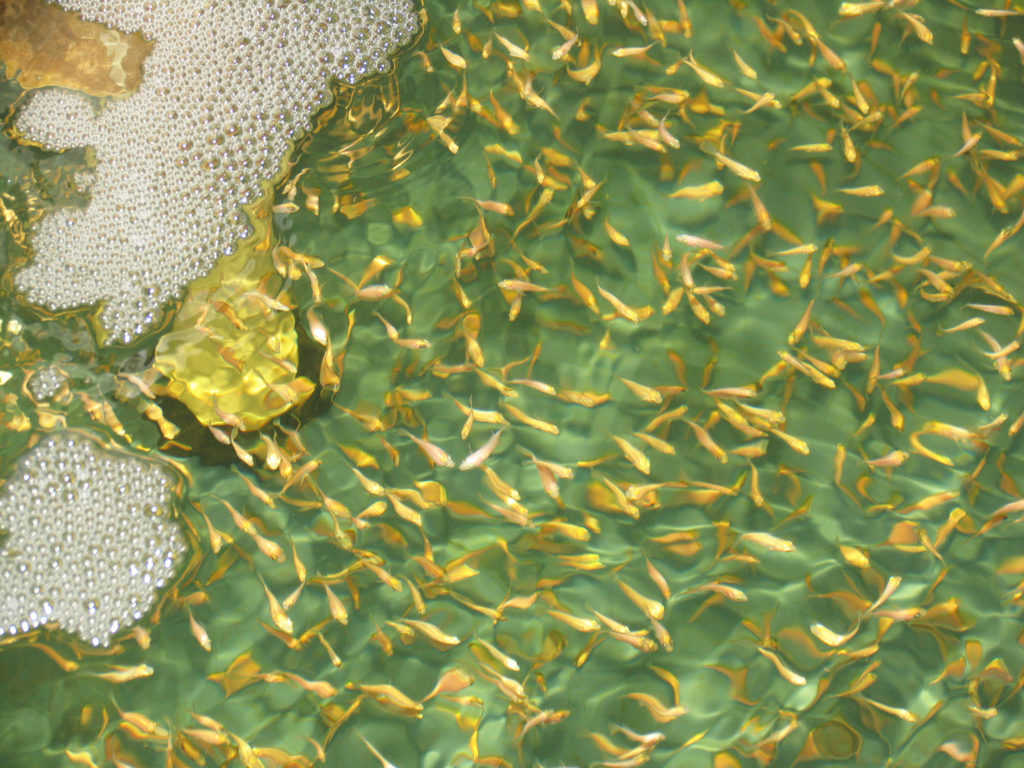 This study examined differences in fish performance and water quality dynamics between biofloc, clear water and hybrid systems as nurseries for tilapia. 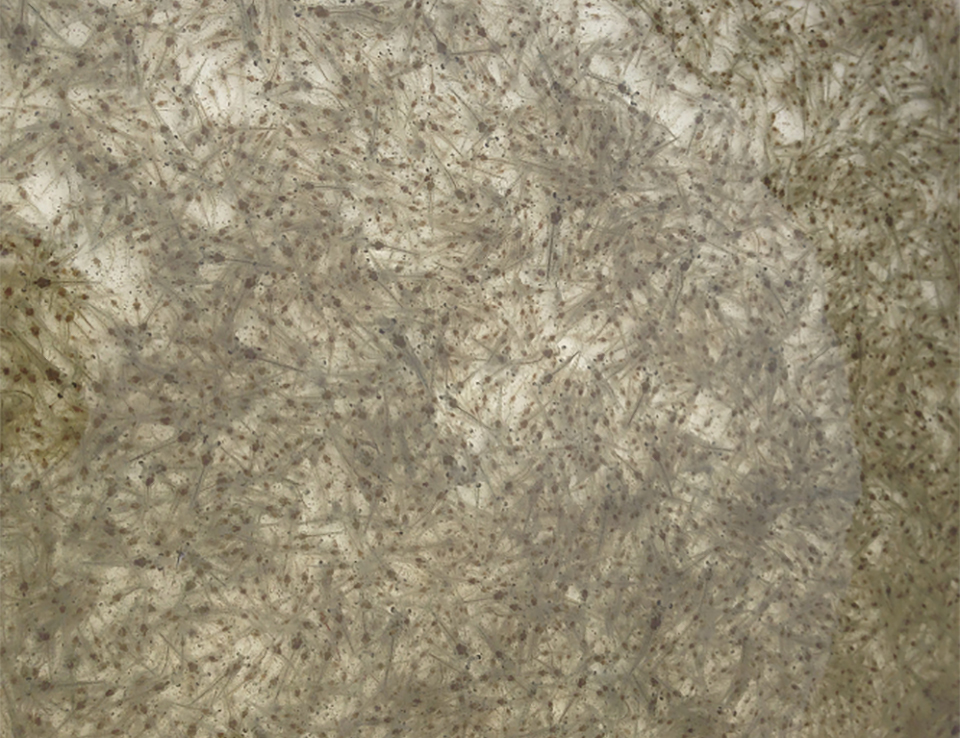