Indoor, closed aquaculture systems are becoming more popular, especially for some species like Nile tilapia (Oreochromis niloticus) producers in the United States, as these systems allow for a significant degree of control and management.

In BF systems, biofloc particles accumulate and are maintained in suspension in the water column by aerating and mixing the water. These particles can be an additional food source for animals such as shrimp and tilapia, recycling nutrients and improving feed conversion rates. Additionally, biofloc may have a probiotic effect due to competitive exclusion of harmful microorganisms and by possibly improving the animals’ digestive enzymatic activity. But the operation of BF systems requires higher aeration levels due to microbial oxygen demand and possible unstable nitrogen cycling.

Compared to BF systems, CW systems require more filtration components, including external biological and mechanical filters, which increase the system cost. But CW systems may have more stable nitrification cycles because of the controlled environment provided by external biofilters, and also yield more predictable harvests. Both CW and BF systems are used to produce tilapia, but adult fish cultured in BF systems may have higher growth rates.

Because BF and CW systems have benefits and disadvantages, hybrid (HY) systems could  incorporate desirable characteristics of each, and water quality may be more easily maintained if external biofiltration is added. The fish may have supplemental nutrition if some biofloc particles are allowed to accumulate in the system.

This article summarizes the original publication of this study to examine differences in fish performance and water quality dynamics between BF, CW, and HY systems as nurseries for tilapia.

This study – using 12 fish culture tanks operated at a water volume of 180 liters – was carried out in the Aquaculture Production Technologies (APT) Building at the Kentucky State University Aquaculture Research Center in Frankfort, Kentucky, USA. The APT building is a 1,300-square-meter, insulated facility where air temperature is maintained at approximately 25 degrees-C.

There were three treatments (CW, BF, and HY) in this study, and each treatment was randomly assigned to four replicate tanks. Each CW tank had a setting chamber, a foam fractionator, and a moving bed biofilm reactor (MBBR). The BF tanks only had a settling chamber and the HY tanks had a settling chamber and an MBBR. To make sure that each system had the same overall water volume, each BF system had a pseudo foam fractionator and a pseudo MBBR, and each HY tank had a pseudo foam fractionator. Both HY and BF systems were operated as chemoautotrophic biofloc systems. No additional carbon sources were added to the tanks other than feed.

The experiment lasted for nine weeks, and then all fish were counted, weighed individually, and weighed as a group. Specific growth rate (SGR) and survival were calculated at the end of the study.

For detailed descriptions of the experimental system design and its management; animal husbandry used during the study; water quality monitoring and management; and statistical analyses, please refer to the original publication or the corresponding author. Funding for this project was provided by the USDA’s National Institute of Food and Agriculture 1890 Capacity Building Grant Program (KYSU-2015-38821-24390).The authors are thankful to several members of the Aquaculture Production Sciences team at Kentucky State University for their technical assistance.

Table 1. Production metrics from tilapia produced in biofloc, clear-water RAS and hybrid systems. Data are presented as mean ± SEM; (a b) indicate significant differences between treatments.


Water quality parameters monitored – dissolved oxygen concentration, water temperature, and salinity – were all within appropriate ranges for tilapia growth. TAN concentration never exceeded levels reported as lethal for tilapia fry in any treatment, and un-ionized ammonia levels determined were below the recommended limit for chronic exposure (0.1 mg NH3-N/L). Relatively high nitrite concentrations were detected in the BF systems, especially during the last half of the project, and these may have contributed to a chronic toxicity effect on the fish and affected their performance.

The increased overall amount of bacterial activity compared to the other two systems could explain the lower pH in the HY systems. The external biofilter and biofloc particles in the water both provided substrate for bacteria, possibly increasing the total respiration and therefore CO2 production, which forms carbonic acid and decreases water pH. But BF systems had the lowest DO levels over the course of the study, possibly due to increased microbial activity directly in the tanks where the DO was measured.

Overall, hybrid systems tended to perform better than CW in all metrics, possibly due to the biofloc particles the fish could consume in the HY systems, but these differences were small and not significant.

CW and HY systems both significantly outperformed BF systems in most production metrics in our study. Although other research work has determined that adult tilapia may perform well in biofloc systems, our results indicate that chemoautotrophic biofloc systems may not be the most appropriate system for tilapia fry.

Tilapia fry may benefit from having suspended particles in the water, and our results also show that tilapia fry grow well in hybrid systems, which have lower startup costs than clear-water due to reduced filtration, but also include some suspended particles similar to biofloc techniques.  Using external biofiltration can contribute to water quality stability in closed aquaculture systems and using hybrid systems in tilapia nursery production is a viable alternative to other established approaches.

We recommend that future research assesses the performance of adult tilapia in these systems and studies how suspended solids in the water column may contribute to the nutrition of tilapia. 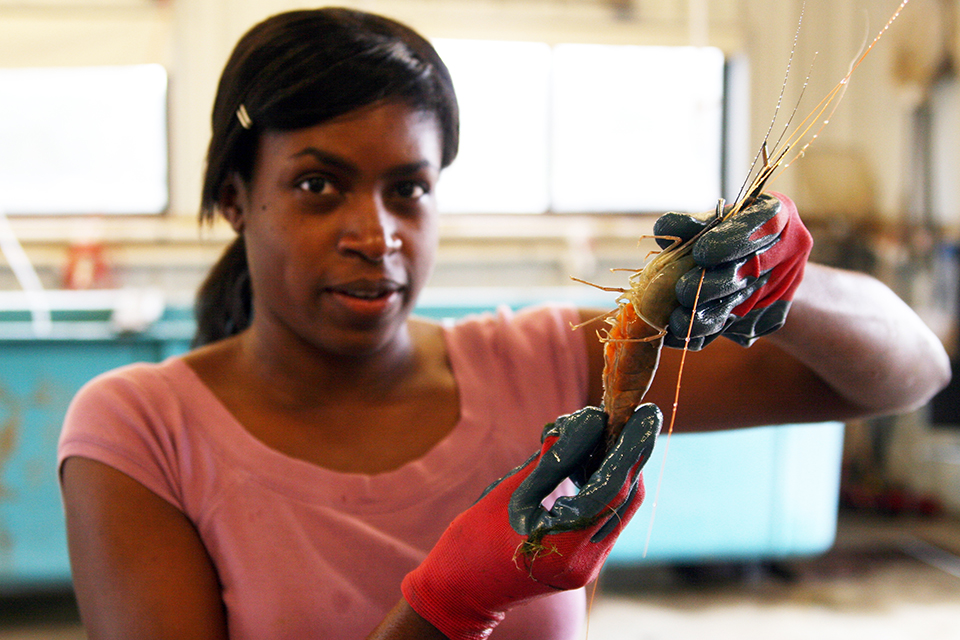 In analysis of nine strains of freshwater prawns, wild Myanmar and cultured India populations had the greatest allelic richness and expected heterozygosity.