Recirculating aquaculture systems (RAS) for shrimp culture are usually stocked with specific pathogen‐free (SPF) postlarvae (PL) to reduce the infection risk for shrimp, especially for viral and parasitic pathogens. Bacteria on the other hand are always present in shrimp RAS and are even necessary for the maintenance of optimal water conditions, including nitrifying and heterotrophic bacteria. The high stocking densities typically used results in large amounts of organic material from faeces, feed not consumed and low water exchange rates, so the load of heterotrophic bacteria can increase significantly in shrimp RAS when no management strategies are implemented for reduction of bacteria numbers.

Controlling potentially pathogenic, mostly heterotrophic bacteria is essential in RAS shrimp production and different approaches are used to reduce the risk of bacterial infections and to reduce the total amount of bacteria. The goal is a general reduction of high bacterial numbers in the water and the stabilization of a mature physiological microflora to prevent the establishment of potentially pathogenic bacteria within the mature microflora. For bacterial reduction, physical methods such as ozonation and ultraviolet (UV) irradiation are used, either separately or in combination

Any disinfection method may not only reduce pathogens but also can decimate beneficial microbial populations and favor the proliferation of opportunistic pathogens. Therefore, not only bacterial reduction but also the stabilization of the physiological microflora should be considered. Most studies conducted on disinfection of RAS waters have been for finfish production, and limited information is available for shrimp RAS

This article – adapted and summarized from the original publication [Teitge, F. 2020. Water disinfection by ozonation has advantages over UV irradiation in a brackish water recirculation aquaculture system for Pacific white shrimp (Litopenaeus vannamei). J. Fish Diseases 43(1): 1259-1285, October 2020.] – reports on a study that investigated the effect of different doses of UV light as well as the effect of ozone application on the microflora in RAS culture of  L. vannamei.

Power move: Japanese energy firm getting in on RAS shrimp

This study was carried out at the Fish Disease Research Unit, University of Veterinary Medicine, Hannover, Germany, using six separate laboratory-scaled RAS. Each RAS had three holding tanks, a biofilter and a sedimentation tank. All RAS were maintained with the addition of food for three months before shrimp were introduced into the holding tanks. Water temperature was adjusted to 30 degrees-C and water salinity to 15 ppt.

For both experiments, specific pathogen‐free L. vannamei from a commercial hatchery (Shrimp Improvement Systems, Florida USA) were procured as PL 12 and acclimated for three weeks in a separated holding tank. After the acclimatization period, the shrimp were transferred to the holding tanks of the different RAS for each experiment. Automatic feeders were used in each tank, and before and after the start of UV irradiation and ozone application, the body weights and lengths of six shrimp per tank were recorded.

We evaluated the effects of UV irradiation and ozone application in a brackish water RAS experimental setup for L. vannamei and investigated the bacterial compositions in the water, on the biofilms of tank surfaces and on shrimp carapaces and in the abdominal cavities of the animals. Additionally, the performance of the shrimp and the chemical water quality in the RAS were analyzed.

Ultraviolet irradiation and ozone application are widely used in aquaculture systems for finfish production mainly prophylactically for a general water disinfection with the aim of reducing the number of heterotrophic bacteria in the system and thus preventing the animals from disease outbreaks due to infections with facultative pathogens. Both methods are known for many years for their use in finfish aquaculture and even in shellfish facilities, studies on the effectiveness of UV irradiation were performed.

In general, the advantages of the use of UV irradiation over ozone application are lower costs and an easier maintenance of the reactors. Ozone application cost more and are also very complex. However, in RAS the costs can be lowered when other gases like oxygen are applied to a specific tank separated from the holding tanks, as only an ozone reactor has to be installed and because the water in RAS setups is reused, the amount of needed ozone is reduced as well

Regarding the chemical water quality, UV irradiation led to a reduced amount of ammonia in the water of RAS only when UV reactors with a power of 9 Watt were used, and no reducing effect was seen for the concentrations of nitrite and nitrate. Ozone application on the other hand prevented a nitrite increase and led to a faster decrease of nitrate compared to the control RAS. This benefit of ozone is widely known and makes ozone even more effective in RAS than UV irradiation

The main focus of our study was the influence of the two disinfection methods on the bacterial community composition in the water, on biofilms of tanks and shrimp carapaces and on the bacteria present in the abdominal cavity of the shrimp. The bacterial community was analyzed by culture techniques followed by molecular biological identification. Not all bacterial species present in the samples might be detected by cultivation methods because not all bacteria grow on agar plates, and this has to be considered when interpreting the data. However, the main bacterial species in aquaculture systems belong to the γ‐Proteobacteria and are culturable.

In our study, a reduction of Vibrio spp. could not be achieved by UV irradiation or ozone application. In general, the composition of bacterial genera stayed very stable and comparable to the control RAS in the ozone experiment and changed to a larger extent in the UV irradiation experiment. But after ozone application, we observed a shift in the detected Vibrio species: the number of V. alginolyticus – a potential pathogenic bacterium for shrimp that was detected in high numbers before the start of both experiments – decreased significantly over time after treatment with ozone and was not detected anymore on the carapaces of shrimp at the end of the experiment. Concurrently, the number of potentially pathogenic V. parahaemolyticus increased.

In our UV irradiation experiment, the number of V. alginolyticus decreased far less and was still highly abundant on day 42 in the biofilms of tank surfaces and on the carapaces of shrimp, especially in the RAS treated with 9-watt UV light. And the number of V. parahaemolyticus concurrently increased in this RAS. V. alginolyticus is known for forming biofilms that are able to survive UV treatments. Our results suggest that V. alginolyticus could be eliminated from the RAS by ozone but not by high dosage of UV irradiation. The reason for this different effect on V. alginolyticus was probably that a certain number of these bacteria was organized in biofilms and UV irradiation could only reduce bacteria in the circulating water. This underlines the statements from other, previous studies emphasizing that care must be used when determining the effective ozone or UV dose to achieve disinfection, because specific pathogens may require much higher doses for effective inactivation.

In our trials, the application of ozone showed advantages over disinfection by UV irradiation because the chemical water quality was improved and the microflora in the whole systems was more stable. Our previous studies on the microbial community in freshwater RAS had shown that a stable microflora appears to be very important to avoid the rapid growth of potentially pathogenic (to fish) bacteria. Biofilms can especially act as reservoirs for potentially pathogenic bacteria, and therefore, stable biofilms formed by harmless bacterial species, like we observed in the ozone trial, could reduce the risk of infections caused by opportunistic pathogens.

In general, the bacterial composition in the RAS changed to a greater extend after UV irradiation but stayed relatively stable and comparable to those of the untreated control RAS after ozone application. Differences in the microbial community in RAS can be due to disinfection but also to varying water exchange and reduced feed inputs. Therefore, general management strategies in RAS are at least as important as disinfection measures. We had previously shown that the combination of ozone application followed by UV irradiation was more effective compared to the use of only one method alone in reducing bacteria counts in freshwater aquaculture systems. We did not test the combined effect of UV irradiation and ozone application and suggest further studies in brackish water RAS for shrimp to evaluate these combined effects.

Based on the results of our study, the use of ozone in brackish water RAS for Pacific white shrimp has beneficial effects on chemical parameters and stabilizing effects in the microbial water quality. In contrast, UV irradiation was less effective in optimizing the chemical water quality and led to more significant changes in the microbial composition. This might have an influence on the stability of the physiological microflora over time. Because of these results and as no negative effects in the animals were seen after ozone application, its use in shrimp RAS appears adequate. 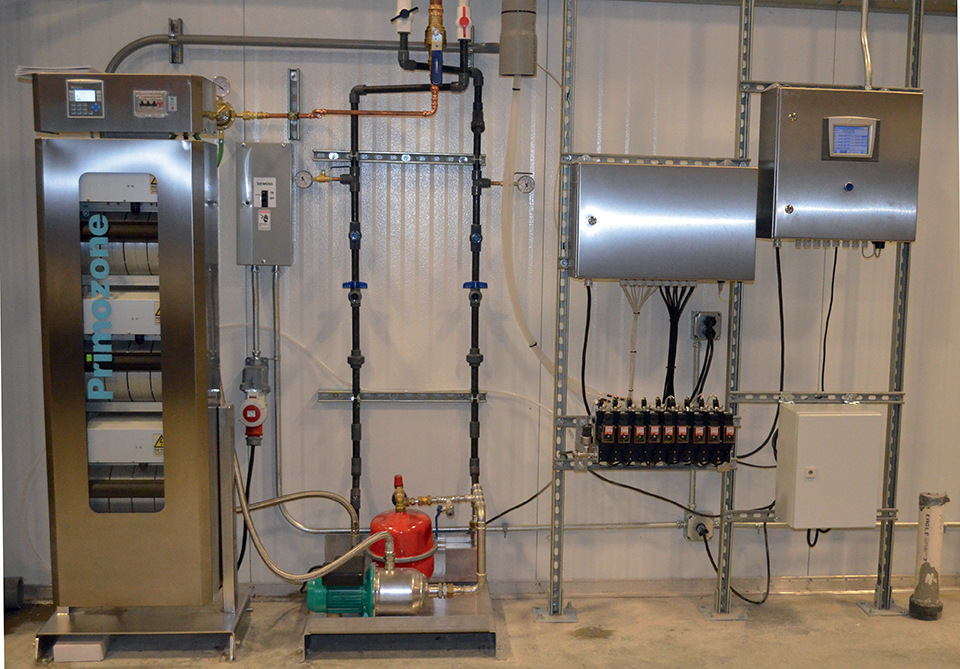 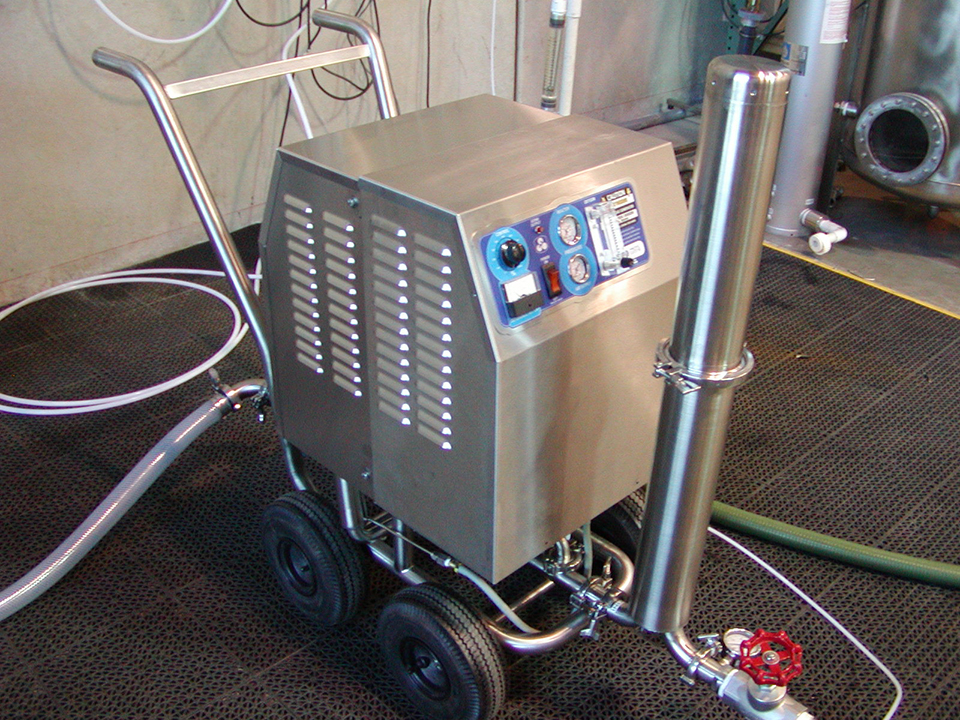 Many chemicals are used as antimicrobial compounds but ozone has characteristics that make it desirable for disinfection and sanitizing.