An important variable around which operations are often timed

The atoms and molecules of a mass of matter to which energy is added vibrate faster and move slightly farther apart. The heat content of matter is a result of energy of the movements of atoms and molecules. Temperature is simply an indicator of how warm an object is as a result of its internal energy (or heat) content. It is a measurement that man developed and uses to assess how hot things are. A thermometer responds to the average kinetic energy of the molecules within a substance.

Temperature is an important factor effecting the growth and survival of all organisms. However, water temperature is especially important to the growth and survival of shrimp, fish, and other aquaculture animals, because they are poikilothermic (coldblooded). Poikilothermic animals cannot control body temperature, and they equilibrate with the temperature of the surrounding water. Aquaculture animals usually are classified as coldwater, warmwater, and tropical species.

The relationship in Fig. 1 is slightly different for warmwater or coldwater species. These organisms are not likely to die as a result of low temperature in natural or aquaculture waters.

A nice example of the above relationship is shown in Table 1 using data published years ago by Ji-Qiao Wang and colleagues. Carp were held under controlled temperature considered optimum for growth, but the salinity of the water was varied. Although temperature was near optimum, growth declined as salinity increased. Nevertheless, water temperature is a fundamental factor influencing growth, and aquaculture species should be selected to have temperature requirements allowing near optimum growth for the water temperature range at a particular production facility. Obviously, one cannot expect optimum temperature continuously, but periods with temperature deviating far from optimum will decrease production potential.

Table 1. Effect of salinity on recovery of food energy as growth in the common carp (from Wang et al. 1997).

Temperature has another important effect in ponds and in lakes for cage culture. The density of liquid water increases from 0 to 4 degrees-C and then decreases as temperature rises further. This results in ice floating, water bodies not freezing solid, and it causes surface water to heat faster and become less dense (lighter) than deeper water. This temperature-density dependence of water causes less dense surface waters, in which there is light for plants to produce oxygen through photosynthesis, to float on top of deeper, un-illuminated water.

This phenomenon, known as thermal stratification, separates the upper layer of water from deeper water, because wind action is not powerful enough to cause them to mix. Dead plankton settles to the bottom, but oxygen from the upper, illuminated layer cannot mix with the deeper layer because of thermal stratification. This results in dissolved oxygen depletion in the deeper water.

Destratification may occur as a result during cool periods or following intense rain and heavy wind that causes surface and bottom layers to mix. This phenomenon is commonly called on overturn, and the mixing of the deeper water with surface water can lead to dissolved oxygen depletion and fish mortality.

Aquaculture ponds usually are intentionally made shallow. They may stratify briefly during the day, but they mix at night when heat from the surface water is lost to the air by convection. Water currents caused by mechanical aerators in ponds also prevent thermal stratification.

Other effects of temperature

Temperature has other effects, because phytoplankton and zooplankton also respond to water temperature. Warmwater also favors greater rates of chemical reactions, and fertilizers and liming material applied to ponds will dissolve faster.

Although the fact that warmer water holds less oxygen at saturation than does cooler water does not directly cause a problem, the respiration rate of all aerobic organisms increases with higher temperature. The culture species, phytoplankton, zooplankton and bacteria require more oxygen of respiration at higher temperature but from water that contains less dissolved oxygen. This is why dissolved oxygen depletion becomes a greater threat to the well-being of aquaculture animals as water temperature increases.

Temperature has some other impacts on ponds. Because warmer temperatures favor plankton growth, more carbon dioxide and bicarbonate will be removed from the water for use in photosynthesis than at lower temperature. This leads to greater fluctuation between nighttime and daytime pH, but usually this phenomenon does not affect the culture species appreciably. 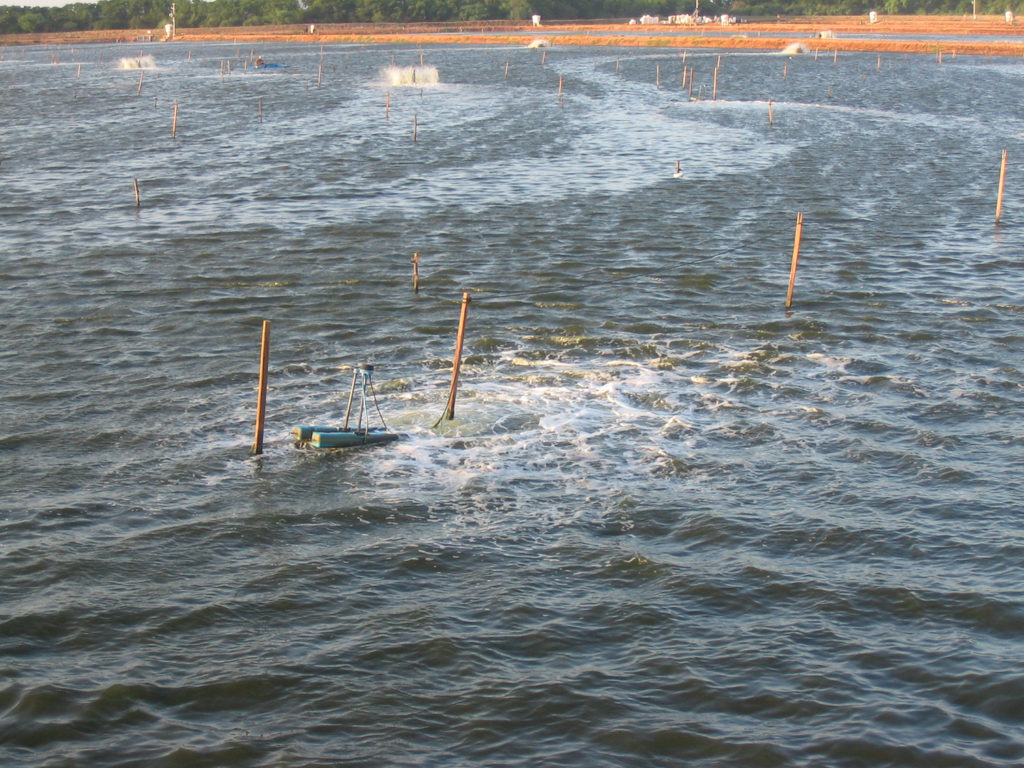