Salmon farming is big business, with production volumes of Atlantic salmon, the predominant farmed species, increasing by more than 800 percent since 1990. Annual production of all salmon species is well over 2 million metric tons (MT) globally and is set to rise considerably over the next decade as technology enables production to take place further and further offshore (as well as on land)

For production of salmon to increase, so too must alternative sources of omega-3 fatty acids, particularly the long-chain eicosapentaenoic acid (EPA) and docosahexaenoic acid (DHA), essential for energy and muscle growth in salmon. EPA and DHA are also the primary omega-3s needed to support heart health in humans and their high content in salmon is often promoted by seafood marketers and healthy-eating experts to help increase sales.

Fish oil was traditionally the major source of EPA and DHA in salmon diets. However, with finite fish oil supplies available from wild-caught fish such as Peruvian anchoveta, and competition for omega-3s from the fast-growing market for health supplements, fish feed manufacturers are increasingly seeking alternative sources. These include algae, insect meal, byproducts of the alcohol brewing industry and advanced soy products. Considerable effort is being put into finding others.

Soy beans and canola oil are good natural sources of the short-chain omega-3 fatty acid alpha-linolenic acid (ALA). While ALA is also an “essential” omega-3 fatty acid – meaning that our bodies cannot make it on their own – it is a precursor to EPA and DHA. Some experts believe that conversion rate by humans is low, with less than 1 percent of ALA being converted to EPA and DHA.

In order to boost the potency of canola oil and its usefulness in salmon feed, American feed giant Cargill and Australia’s Nuseed are both investing large sums of money in the development of a genetically modified (GM) canola oil that is rich in DHA.

Professor Jonathan Napier of Rothamsted Research in Harpenden, UK, is also undertaking field trials with GM crops and hopes that they may prove to be an acceptable solution. However, while GM products in general are widely produced in the United States and Asia, they are not currently accepted by consumers in Europe.

“We think GM technology has the potential to help fish farming become more sustainable and continue to grow as an industry,” said Napier.

Esteemed nutritional science expert Marion Nestle, a former senior advisor to the U.S. Department of Health and Human Services, has written many prize-winning books on the subject. She believes that green vegetables are just as capable of delivering healthy omega-3 fatty acids to humans as a GM canola crop.

Nestle also does not believe there is compelling evidence that omega-3 deficiency is an important public health problem in the United States and questions the importance of developing DHA-rich GM crops for aquaculture.

“Think about this for a minute,” she said. “Plenty of human populations have survived and thrived in areas where there were no fish or fish oil supplements. How? They ate green vegetables. These have plenty of omega-3 fatty acids that are synthesized into the much longer-chain ones that are easier to get from fish, but they work just fine. Good thing. I think omega-3s are another good reason to eat your veggies.”

Use of fish oil in salmon feed has been gradually decreasing. Fish oil inclusion was on average 24 percent of the salmon feed formulation in Scotland in 2005, falling to 11 percent by 2012 and hovering at around 9 percent today.

Some feeds are made with zero fish oil, but only for use at certain periods of the production cycle, to avoid health and disease issues in the fish. There remains a big question mark over whether fish oil can ever be fully removed.

According to Su Cox, communications and business development director at the Scottish Salmon Company, the taste of a salmon fed entirely on a vegetarian diet is “not quite acceptable yet.”

According to organizers of the F3 Fish Oil Challenge, a two-year competition introduced in September 2017, following the conclusion of a successful challenge to create a fish feed using no fishmeal, there are alternative sources of protein that can be substituted in without any impact on fish growth and health. However, there is no substitute for fish oil that is cost-effective and available at scale.

“Our latest challenge is to create a fish-free ‘fish oil’ replacement with a profile of essential fatty acids that mimics those found in forage fish. The goal is to reduce demand pressures on wild-caught stocks, by accelerating the availability of cost-competitive, viable alternatives to fish oil,” said Dr. Kevin Fitzsimmons, University of Arizona, who sits on the judging panel.

Aquaculture’s increasing efficiency with aquafeed resources has changed the nutritional profiles of farmed seafood products. Last year the foremost UK news channel, the BBC, ran a prime-time report that alarmed the public by stating that falling omega-3 levels in salmon meant that it was no longer such a good food to eat, although it remained one of richest sources of omega-3s.

Information for the news report came from a study undertaken by researchers at Stirling University, led by Professor Douglas Tocher.

“About five years ago, a portion of Atlantic salmon of 130 grams was able to deliver three-and-a-half grams of beneficial omega-3s. This is actually our weekly recommended intake. Now, the level of omega-3s has halved. Therefore, instead of eating one portion of farmed salmon, we would need to eat two portions,” he said. 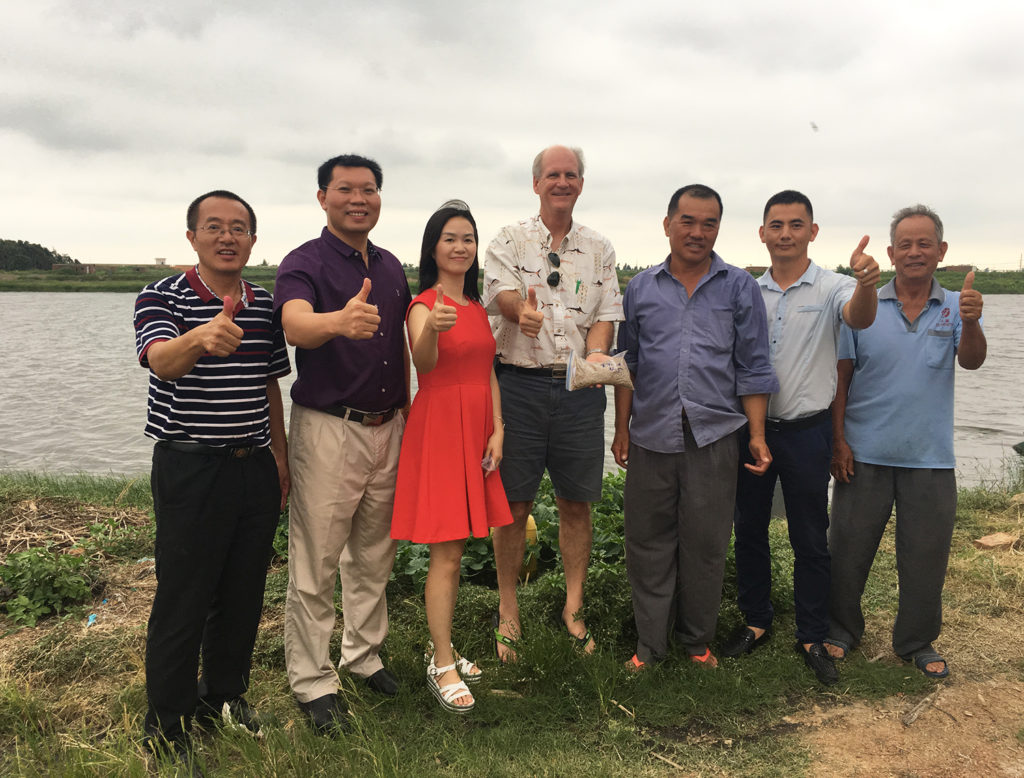