Silicon Valley – a rich tract of land in the southern San Francisco Bay area of California – was a fitting host to last week’s gathering of innovators and start-up companies looking to get on the map.

The entrepreneurs there, however, weren’t garage-dwelling web developers from the tech sector showcasing the hippest new smartphone apps. They were aquafeed manufacturers and alternative fish feed ingredient suppliers from all over the world. At F3 (Fish Free Feed) the folks pitching black soldier fly larvae and microalgae took center stage, heeding the call to help reduce aquaculture’s dependence on wild fish resources for feed.

This hub of innovation, where new products are launched at breakneck speed and where fast-moving networks are established daily, served as inspiration to the eight F3 contestants striving to be the first team to produce 100,000 metric tons of aquafeed with zero fishmeal and fish oil.

“This place is more in tune with innovation than any other place on the planet today,” said event organizer and University of Arizona professor Kevin Fitzsimmons. The event was billed as “Feed Companies Got Talent,” a riff on the popular TV show.

In a hotel conference room in San Mateo, seafood industry investors and sustainability experts listened to a range of presentations on the latest and greatest solutions to aquaculture’s greatest cost input – feed – and grilled speakers about the particulars of their enterprises.

Bill Foss, who was a co-founder of Internet browser Netscape and who is now co-owner of Bay area seafood restaurant Fish. and distributor TwoXSea, has a heritage of innovation and technology. Foss, whose father worked for defense contractor Lockheed Martin, said the “mentality” of Silicon Valley could catapult aquaculture into a sustainable new era.

“We are at an amazing point in human evolution and technology,” said Foss. “Everything we understand about the human body tells us it’s the most complex machine we can imagine and we still don’t know how it works.”

A deficiency of omega-3 fatty acids in human diets has led to numerous afflictions, he said, including arthritis, cancer, diabetes, hyperactivity and learning disorders, among others.

Encouraging crossover connections between these normally separated segments may well catalyze the reactions long awaited in this area to realize large scale innovation in alternative feed ingredients for aquaculture.

The rainbow trout – produced by McFarland Springs Trout Farm in Susanville, Calif. – is being sold at roughly 60 San Francisco area restaurants and is lauded for its silky texture and high omega-3 fatty acid content. On one evening, all contestants and conference participants gathered at Fish. in nearby Sausalito for a sampling.

Despite the fact that “food is the new medicine,” said Foss, there are economic forces working against the widespread adoption of healthy foods like farmed trout. A six-ounce portion at Buy Rite costs less than a large latte at Starbucks, yet it’s considered expensive.

“We have to spend more on food and less on patio furniture,” he said. “[We must] immediately develop land- and plant-based aquaculture alternatives with extreme urgency. We are dragging our feet on this – it’s painful. It’s domestic security. If we can’t feed our people we’ve got a problem.”

Other contestants were similarly hopeful of big change in their home countries. May Myat Noe Lwin, technical manager at the U.S. Soybean Export Council, represented Htoo Thit Co. and the Myanmar Aquaculture Program. Myanmar is a country in transition, she said, that has a hard time sourcing fishmeal. So working with alternative ingredients is more of a necessity.

“In Myanmar, aquaculture is late compared to other countries,” she said, adding that it can be difficult to convince farmers there to accept replacement ingredients, although they don’t have a lot of choice. “I hope to see that F3 will be recognized as more sustainable and that seafood farmed that way will get extra consideration.”

Several investors interested in the aquaculture space took close notes during the presentations, including David Tze, CEO of Aquacopia Management LLC in New York. Tze, who plans to launch a search fund targeting alternative ingredients for aquaculture, said the three-day Silicon Valley experience was a “remarkable, unique and thoughtful assembly.”

Tze said his belief in the investment prospects for this subsector has grown since his initial investment in 2005. As suppliers and manufacturers scale up their operations, “it only serves to strengthen this belief,” he said.

One of the exciting presentations came from Agriprotein, a company based in South Africa that is a leader in what it calls “nutrient recycling.” Using fly larvae fed on abundant food waste and byproducts, Agriprotein dries and processes the larvae into a nutritious feed ingredient. Jon Duschinsky, CEO of Agriprotein-US, was clear about the company’s mission: “We know that we’ve got an impending crisis. It’s here it’s real and we’re already in panic station mode.”

With about 600 million tons of food waste going to landfills every year, the company hopes to recycle some of those wasted nutrients back into the food chain via aquaculture.

“It’s not rocket science; it’s nature,” he said. “Nature has been doing this for millions of years. The trick is in commercializing it.” The European Union recently allowed the use of insects in aquafeed, and the company plans to operate five factories in the United States, South Africa and Vietnam.

Fish that are fed Agriprotein’s “evolutionary diet” product, MagMeal, would benefit from antimicrobial peptides and beneficial fats that assist the immune system. Robert Walberg, the company’s director, said the product has a similar amino acid profile to fishmeal, adding that that lysine and methionine do not have to be supplemented.

“This insect here, I just know, will be as important as the honey bee in the coming decades,” said Walberg. “So much potential to help us.”

Gorjan Nikolik, senior seafood analyst at Rabobank, told the gathering in San Mateo what everyone in the room already knew: To double global aquaculture production, as many believe is what must be done to feed some 9 billion people on the planet 30 years from now, alternative feed ingredients must be found and their production must be brought up to scale.

“Trash fish is definitely not sustainable – that’s an industry that needs to be replaced. And fishmeal is not bad, if it is well managed,” he said. “But it’s only a small percentage of what we need.”

According to Nikolik’s data, only 9.5 percent of aquafeed is fishmeal and fish oil. There’s plenty of room for further innovation in the sector, he said.

With responsible aquaculture, we can “eat better, live longer and feel better, while creating jobs and reduce carbon dioxide emissions,” said Foss. “You can’t get a happier solution than that.” 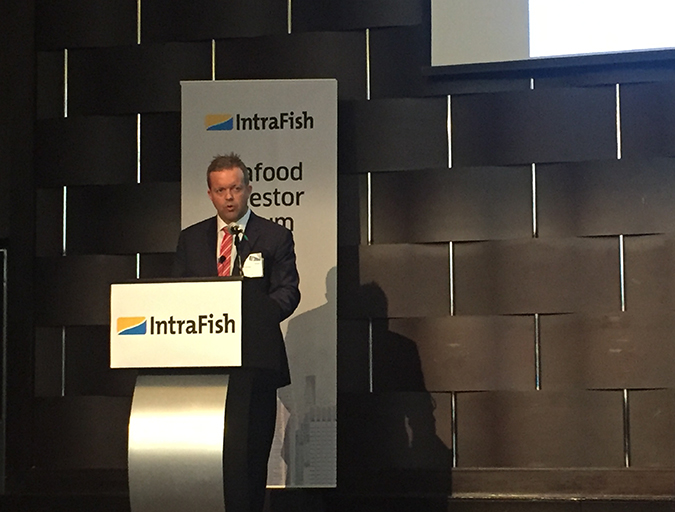