Considerable energy can be saved by using automation systems

Pond aquaculture is becoming increasingly intensive, and as a result, more feed is used, and mechanical aeration is a common practice. There are many types of pond aeration systems, but most operate on one of two principles.

With “splasher” aerators, water is splashed into the air to increase the area of contact between air and water for diffusion of oxygen from air into the water. Alternatively, air bubbles can be released into the water from diffusers placed near the bottoms of ponds. With these “bubbler” aerators, small bubbles rise through the water column, creating a large surface area for diffusion of oxygen from the air inside the bubbles into the water. There have also been efforts to develop pure oxygen contact systems for pond use, but satisfactory devices are not yet available.

The common splasher aerator types are vertical pumps (turbine aerators) and paddlewheel aerators. Propeller-aspirator-pump aerators rely on the venturi principle to introduce air bubbles into the water. Diffused-air aeration systems consist of an air blower connected by tubes to a network of diffusers on the pond bottom for discharging fine bubbles of air into the water. All of these types of aerators have been used successfully in aquaculture, but each type has certain advantages and disadvantages that make it more appropriate for some applications than others.

Propeller-aspirator-pump aerators can be used over a wide range of pond sizes. In shallow ponds less than 0.75 meters deep, however, they can cause some erosion of the pond bottom. These devices have the capacity to create deep water circulation in ponds where water depth is mostly over 2.00 meters. The combination of paddlewheel aerators and propeller-aspirator-pump aerators can be particularly effective in mixing pond water, especially in deep ponds.

Diffused-air systems have the disadvantage of poor performance in shallow water, because the hang time of bubbles in the water is so brief that little oxygen diffuses into the water. Moreover, they are not well suited for large ponds because a great length of tubing and numerous diffusers must be deployed. Diffused-air systems are most appropriate for ponds of 0.25 ha or less in area. These aerators are particularly attractive for complexes of small ponds in which a single air blower can provide air to diffusers in several ponds.

A number of air-lift pump devices are also available for use in aquaculture ponds. While these devices cause vertical circulation of the water column, they are not true aerators. The rising bubbles in the air-lift tube cause some oxygenation, but the amount of oxygen transfer per unit of power is much less than it is for standard aerators.

Most producers tend to view aeration as a means of providing more oxygen for respiration of the culture species so that standing crops can be increased. While this is true, aeration also provides oxygen for use by microorganisms that decompose uneaten feed, feces and dead plankton. Living plankton also use oxygen in respiration.

Although the algal component of the plankton produces more oxygen by photosynthesis than is used in respiration during daylight, the algae continue to respire at night. But in the dark, photosynthesis and oxygen production cease.

There is a lot of competition between microorganisms and the culture species for the dissolved oxygen added to water by aerators. This competition does not change much with respect to intensity of culture in greenwater ponds, because the amounts of organic waste and plankton tend to increase in direct proportion to increases in feeding rates.

Based on the biochemical oxygen demand of feed (about 1.2 kg oxygen/kg feed) and the average oxygen transfer efficiency of aerators, about 1 hp of aeration is needed for each 10 kg/ha increment of daily feed input to maintain nighttime dissolved-oxygen concentrations above 4 mg/L.

Most ponds can safely maintain a standing crop of 1,000 kg/ha without aeration, reflecting a daily feed input around 30 kg/ha in most ponds. Thus, if the goal is to produce 6,000 kg/ha (180 kg feed/ha/day at an input of 3 percent body weight/day), the aeration rate at the end of the culture period should be about 15 hp/ha. Of course, if a safety factor is desired, aeration at the end of the crop could be based on the entire feed input at 18 hp/ha. The amount of aeration can be increased as feeding rate increases to conserve energy rather than applying the entire amount of aeration throughout the culture period.

In tilapia culture, a lower minimum dissolved-oxygen concentration of 2 or 3 mg/L can be allowed. This lessens the aeration rate required per 10 kg/ha increment of feed to 0.5 hp or 0.75 hp, respectively.

In fish culture, it usually is permissible to turn off aerators after mid-morning and not turn them back on until early evening. Shrimp live on the bottoms of ponds, where dissolved-oxygen concentrations are lowest, and movement of oxygenated water across the bottom is beneficial. Nevertheless, the amount of aeration in shrimp ponds usually can be reduced from mid-morning until early evening.

Farmers frequently ask about the best ways to position aerators in ponds, and there apparently are no definitive research findings to allow a defensible answer. In fish ponds, it is probably acceptable to place one or more large aerators at one end of the pond, because fish will move into the oxygenated area. If the pond is rectangular, aerators should drive the water current along the long axis of the pond. Shrimp do not move to oxygenated areas as well as fish do, so it is logical to use several small aerators to provide somewhat uniform aeration over the entire pond area.

Aerators once were positioned in shrimp ponds to create a circular water flow pattern, but this usually created sediment deposits in the central area of ponds. Shrimp farmers now tend to install aerators somewhat uniformly over pond surfaces to spread sediment more evenly over bottoms. Regardless of the aerator installation pattern used, care should be taken to keep strong water currents from eroding embankments and increasing sediment deposition on pond bottoms.

Research has demonstrated that considerable energy can be saved by using aerator automation systems. The cost of these controllers has declined, and reliability has increased in recent years. In the United States, a large number of catfish farmers have adopted aerator automation. 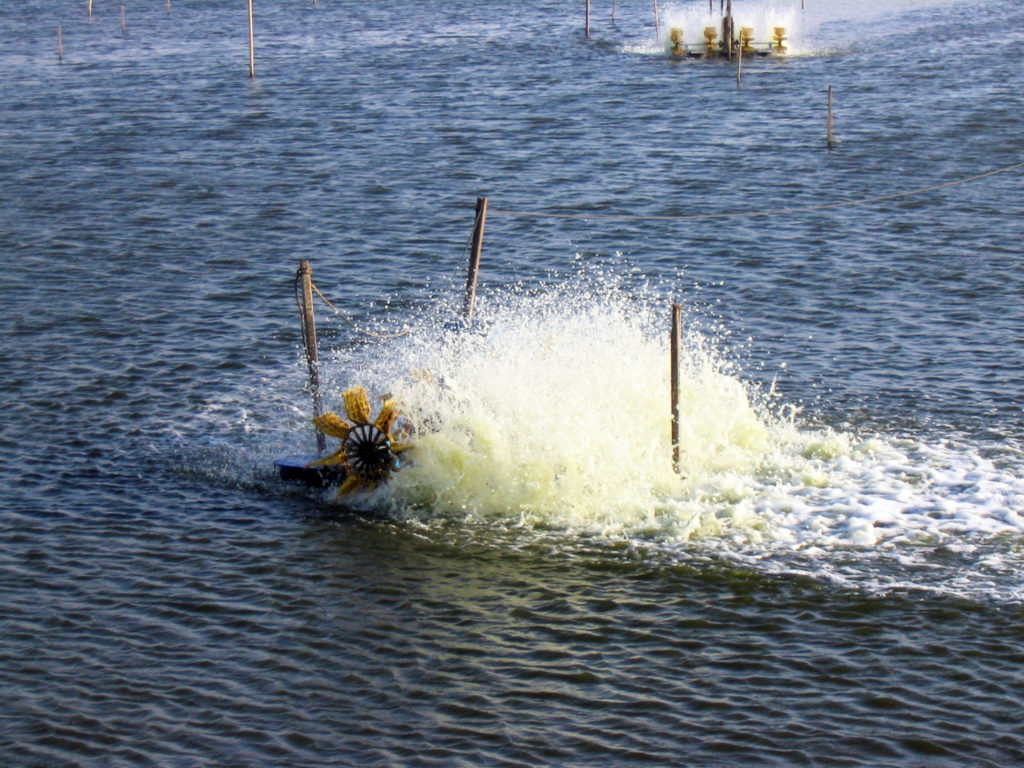 Aerators, especially paddlewheels, are often used to mix the water and address oxygen stratification in ponds. However, most aerators do not provide the most efficient and power-conscious service. Due to thermal and oxygen stratification in ponds, the efficiency of paddlewheel aerators is low, and other present-day aerators have other problems. Emerging designs should better address effective mixing and aerating of pond water.