The international research organization WorldFish Center recently estimated that by 2030 the world’s population will require 232 million metric tons (MMT) of seafood, approximately 62 MMT more than we are expected to produce. Only aquaculture can provide this additional seafood production, which by 2050 is expected to contribute around 80 MMT more production.

But increased aquaculture yields will require more resources. What about dwindling quality water sources, drought, increasing operational costs and so many other factors preventing expansion of the aquaculture industry?

Adding to this, the high cost of coastal land for marine species culture, high cost of feed ingredients such as fish meal, disposal of waste sludge produced, and a lack of understanding the true principles of “farming in water,” creates obstacles for the economic success of commercial aquaculture.

One of the biggest operational challenges in increasing global aquaculture production is the strict limitations on discharge of effluent from aquaculture farms. Effluents from aquaculture farms discharged into local water bodies can result in low levels of oxygen and increased sediment and nutrient loading, potentially harming local fauna and flora.

Approximately 89 percent of all aquaculture output comes from the Asia-Pacific region with little development expected in Sub-Saharan Africa. However, there is a tremendous potential for tilapia development in many sub-tropical and tropical areas of the world, and tilapia cultured in biofloc systems offer some very significant perspectives and advantages.

To overcome these difficulties there is a need to increase fish biomass per unit area and to alleviate the dependency on expensive feed ingredients such as fishmeal, while reducing or preventing the discharge of effluents. Sounds difficult, right? Maybe not, let’s take a closer look at the problem before discussing a solution.

When feeding fish with high protein feeds, approximately 70 percent of the nitrogen in the protein is expelled as waste into the surrounding culture water. Without intervention, nitrogen compounds increase to toxic concentrations resulting in reduced growth and eventual mortality. The traditional method to reduce toxic nitrogen concentrations in the culture water is to engage in routine dilution or water exchange, expelling effluent typically into surrounding water bodies.

By culturing animals that feed low on the food chain such as tilapia, feed costs can be kept to a minimum. Many species of tilapia typically consume decaying plant and animal matter or “detritus,” algae and even bacterial aggregates. By incorporating waste nitrogen into a usable, consumable form by the culture species, two problems are solved at once: reducing protein inputs and eliminating water exchange to maintain water quality. A way to accomplish this task is using biofloc technology.

Aquatic bacteria exist in much greater numbers attached to a substrate compared to free floating in the water column. By suspending solid waste in the water through aeration and mixing, diverse communities of bacteria, algae and protozoa attached to free floating detritus or residual organic matter, can thrive. This provides additional nutrition for the culture organism that can feed on this “environmental food.” Within, weeks to months depending on feed inputs, solids form into suspended, feathery aggregates, here on referred to as “flocs.”

By using lower protein feeds and supplementing sources of carbon, higher carbon/nitrogen ratios favor the development of flocs and the further absorption of potentially toxic nitrogen. Flocs vary in size, from about 50 microns in systems with aerators such as propeller aspirator pumps which shred flocs, to a few millimeters in systems with gentler aeration such as diffused air.

Advantage of biofloc as feed

Flocs contain 98.5 percent water and so this presents a problem for fish that continually graze on them to meet not only metabolic requirements, but energy for good growth, which in turn necessitates an additional feed input. Tilapia consume about 1.5 g of protein from floc per kg of fish, which amounts to about 25 percent of their protein requirement. Research studies on floc systems have shown lower protein feeds of 24 percent provide similar growth of tilapia compared to 35 percent protein feeds, indicating the contribution of protein in biofloc consumed by fish. Feed typically accounts for 40-50 percent or more of variable costs in intensive aquaculture systems.

The latest research also indicates that bioflocs can be harvested from culture systems, dried and added as an ingredient to pelleted aquaculture feeds, replacing 2/3 of fish meal and 100 percent of plant meals. However, the economic feasibility of using flocs as a dried feed ingredient remains undetermined. Increasing prices of fish meal may make dried biofloc a viable economic alternative.

Too much of a good thing 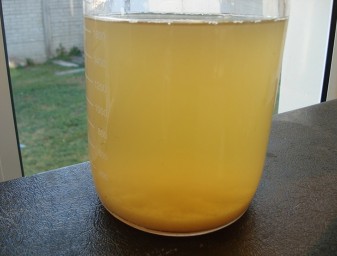 Although tilapia have been reported to survive in water with very high solids content (2,000 mg/L total suspended solids), there is a biological and economic limit to biofloc concentrations in water. As fish grow and more feed is added to the system, solids loading increases, creating more and more floc. Overloaded solids in biofloc systems have been associated with chronic tilapia mortalities and decreased growth due to lower feed intake. In high density systems tilapia cannot crop biofloc fast enough to prevent the buildup of sludge on pond or container bottoms, which rapidly deteriorates water quality. Therefore, solids filtration is necessary to regularly remove sludge before it deteriorates and becomes a problem to the culture species. Solids removed from freshwater tilapia systems are rich in nitrogen and phosphorous and can find a use as fertilizer for traditional agriculture.

In addition to the biological limits, economically speaking, the more you increase biofloc in your water the greater amount of aeration you need to keep fish growing. This results in higher electricity costs for aeration and the need to install more aeration devices. Tilapia growth is best, based on economic return, at a medium dissolved oxygen rate of about 3.75 mg/L. Up to 86 percent of oxygen demand has been associated with microbial communities of biofloc in aquaculture systems.

Biofloc technology remains a viable alternative for eliminating effluent discharge, and increasing feed efficiency by lowering protein feed requirements for aquaculture. However, biofloc needs to be managed due to possible sedimentation creating toxic sludge, and dramatic increases in dissolved oxygen requirements due to respiration of heterotroph bacteria associated with biofloc.