Frozen shrimp is a common product in international markets, where Japan and the United States are the leading importers. The current market expansion offers enormous potential for a wide range of value-added shrimp products in a variety of final preparation forms.

The traditional value-added shrimp products are individual quick frozen, breaded, battered, and recipe prawns. Within these groups there has been an opportunity for sophistication in terms of glaze level, flavoring, and preparation techniques, such as tail-on breaded, or battered shrimp and shrimp rolls.

A study of shrimp exports to the Japanese and U.S. markets during the 1991-96 period showed increasing product diversification and demand for value-added shrimp products. This study used the “revealed” comparative advantage (RCA) index, obtained by dividing a country’s share in the exports of each type of shrimp product by its share in the combined exports of shrimps of the top-10 shrimp exporting countries.

China used to be one of the major shrimp exporters, but in the past few years it has become one of the main shrimp importers in Asia. India, Canada and Indonesia had a comparative advantage in exporting shell-on frozen shrimp, because these countries exported large-sized frozen shrimp to the Japanese market, which has a relatively higher price and demand than the U.S. market.

Other product forms of exported shrimp (e.g. live, fresh or chilled, dried, salted, smoked, and prepared [containing rice]) still had an insignificant share in the Japanese market, with approximately 1 percent of total imports in 1996. The annual RCA index of exported live shrimp indicated that during the past few years, Australia showed the strongest comparative advantage.

In the Japanese market, live shrimp include mostly Kuruma shrimp (P. japonicus), both from local sources and imports. Australia and Iceland had a comparative advantage for fresh or chilled product. These imported shrimp were consumed domestically as sashimi (raw fish) and sushi, a typical item of Japanese cuisine in which a piece of fish or other seafood is placed on top of a bite-sized portion of vinegared rice.

Indonesia, India, Vietnam, and China had the comparative advantage in exporting prepared or preserved shrimp. Japanese manufacturers took advantage of low production costs in Asia and applied their technical expertise to improve food ingredients, products, and the technical skills of local manufacturers in shrimp-exporting countries.

Peeled shrimp is the raw material used for breaded products, and smallsized shrimp are preferred for that purpose. Moreover, peeled white shrimp found in China, Ecuador, Honduras and Panama are usually preferred to other colors. This is another reason why China managed to supply such a huge volume to the U.S. market during the period of the study.

Fresh, dried, salted, brine shell-on, and peeled shrimp shared 0.2 to 3.2 percent of total U.S. shrimp imports in 1996. Canada had the strongest comparative advantage in exporting these products, and also had a comparative advantage in exporting frozen shrimp in airtight containers. High-production technology is a crucial factor in producing these products, and Canada takes full advantage of its capacity in this field.

Shrimp frozen in airtight containers, breaded frozen, canned, and other preparations were still insignificant in the U.S. market, with only 0.8 percent of total imports in 1996. Thailand, India, Indonesia, Canada, and China showed a comparative advantage in exporting these products. Other preparations of frozen shrimp accounted for 10.6 percent of total imports in 1996, increasing from 3.4 percent in 1991. In this category, Thailand had a significant comparative advantage among all exporting countries, followed by India and Canada.

In both Japan and the United States, almost all the top shrimp exporting countries had comparative neutrality in exporting frozen shrimp. Fluctuations of the revealed comparative advantage index during the 1991-96 period indicated there was an increase in shrimp product diversification. The results also showed Thailand and China have a comparative advantage in exporting value-added shrimp products in the Japanese and U.S. markets. Value-added products are being developed in response to growing demand for quality and convenience in prepared dishes. Developing countries have great potential to produce these products, as they can take full advantage of low labor costs and high-quality but low-priced raw materials. 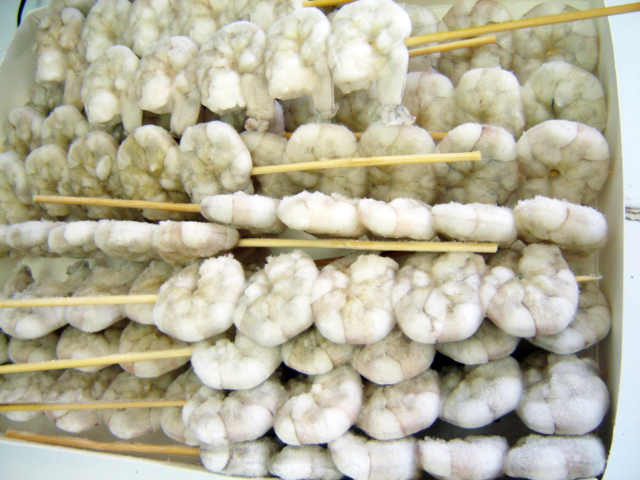 Because some value-added shrimp products are not affected by U.S. antidumping tariffs, various imports in this classification have greatly increased.