Recent shrimp farming technology called for high rates of pond water exchange as a means of maintaining water quality by flushing out organic waste and excessive phytoplankton. However, this approach transports dissolved and suspended wastes into receiving water bodies, where excessive enrichment can occur. A major challenge facing shrimp farmers is the development of cost-effective technology for reduction of water use and waste discharge. This paper describes the experiences of the Arroyo Aquaculture Association (AAA), a cooperative shrimp farm in south Texas, in developing technology to meet more stringent water discharge regulations.

The AAA facility was constructed in 1989. It consists of 85 intensive ponds of 2-hectares each. Water is drawn from and discharged to the Arroyo Colorado River, where salinity typically varies from 6 to 20 ppt. In the farm’s initial years, shrimp were produced using high stocking densities (50 per square meters), high protein feed (35 to 40 percent) and a high water exchange rate (10 to 20 percent per day). These practices yielded profitable production, but also raised concerns over the quality of water discharged from the farm. In these early years, the farm would discharge upwards of 230,000 cubic meters of water per day. The discharge water contained total suspended solids (TSS) as high as 100 ppm and total ammonia (NH3) readings as high as 3 ppm. It became imperative to reduce these levels in order to qualify for a discharge permit from the Texas Natural Resource Conservation Commission (TNRCC).

During the growing cycle, water that is discharged from shrimp culture ponds enters into the drainage/recirculation system. This system consists of over 6.5 km of drainage ditches, which have been converted to sedimentation and aeration areas. Ditches which were originally 3 meters wide, and 0.3 meters deep have been expanded to 12 meters wide and 3.0 to 3.5 meters deep. These ditches also have been weired, so maximum depth can be maintained throughout the system.

The biggest challenge in operating this system has been the management of in-pond dissolved oxygen levels. As the production cycle progresses, a gradual greening of the ponds occurs. This is primarily caused by the increase in total ammonia in the recirculating system. To combat this problem, AAA has increased pond aeration to as high as 30 horsepower per hectare, increased the number of emergency aerators, and increased aeration in the ditches to 100 hp. With these structural and management changes, AAA has been successful in growing crops of shrimp profitably and complying with the regulations set by TNRCC.

From 1994 to date, AAAhas maintained production levels of 3,600 to 5,400 kilograms per hectare with the exception of 1995, when Taura Syndrome virus infected the facility. Satisfactory production levels were maintained, even though stocking densities and feed protein levels were reduced. The waste load on the receiving stream also was dramatically reduced. In 1994, for every kg of shrimp produced 3.56 kg of solids were discharged to the receiving stream, while in 1999 only 0.05 kg were discharged for every kg produced (Fig. 1). Similar reductions have been achieved for the other parameters. In 1994, 0.1192 kg of carbonaceous biological oxygen demand (CBOD) was discharged per kg of shrimp produced compared to 0.0088 kg in 1999. Likewise, total ammonia discharged per kg produced was 0.0942 kg in 1994 and 0.0003 kg in 1999.

Reduction in water use

One of the most dramatic changes that have been accomplished by AAAis the reduction in water use from 37.6 to 1.5 cubic meters per kilogram of shrimp production (Fig. 2). Water is pumped from the Arroyo Colorado during the months of March, April, and May for initial filling of the ponds. After this point, additional water is pumped only to make up for evaporation.

Arroyo Aquaculture Association has been successful in reducing water use from 37.6 to 1.5 cubic meters per kilogram of shrimp production without sacrificing production rates. Waste discharge has declined in step with declining water use. Ponds are filled during March, April, and May and drainage water is reused thereafter, except for occasional replacement of water lost through evaporation. Pond management was modified to reduce the waste load entering drainage ditches. This involved reduced stocking density, reduced feed protein, and increased aeration. In addition, drainage ditches were modified to facilititate sedimentation of solids, oxidation of organic waste, and water reuse. This involved widening and deepening ditches and equiping them with weirs, aeration, and reuse pumps. 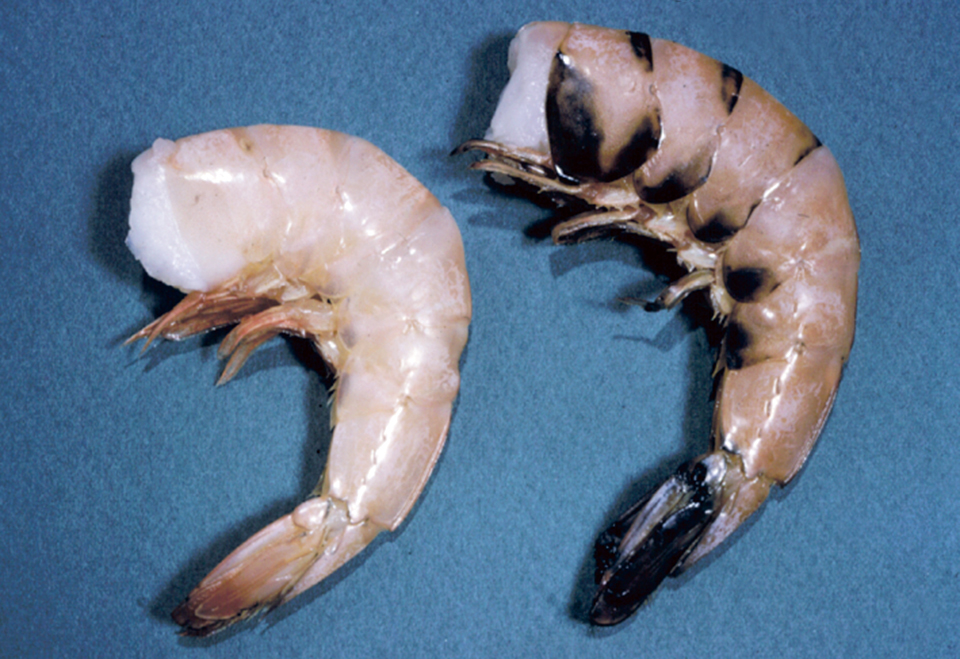