The biggest risk to the viability and expansion of the global shrimp farming industry is disease, which are estimated to cause annual production losses exceeding $3 billion. Therefore, proper disease management is critical to minimize these losses. Currently, the main method to manage disease risks involves the use of specific pathogen free (SPF) or resistant/tolerant (SPR/T) breeding lines to produce high-health seedstock in combination with robust biosecurity and sanitation.

These strategies greatly depend on access to accurate, rapid and sensitive pathogen detection methods like conventional and real-time quantitative PCR testing (qPCR), and there are many PCR tests developed to detect all major shrimp pathogens. In instances where non-destructive testing is required – like screening shrimp broodstock for the presence of a virus and infection loads – samples of gills, pleopods or haemolymph are the only practical tissue sources for testing.

Gill-associated virus (GAV) – also known as yellow head virus genotype 2 (YHV2) – is widespread in Australian wild and farmed black tiger shrimp (Penaeus monodon). In Australia there is increasing interest to establish breeding populations of P. monodon that are SPF and/or SPR/T for GAV. Both of these require accurate detection and quantification of GAV infection loads, and gill or pleopod tissue has commonly been used for RT-PCR analysis. Nonetheless, the extent to which GAV loads can vary between different gill filaments, or pleopods, sampled from the same shrimp is mostly undetermined.

This article summarizes the results of a study that used RT-qPCR analyses to accurately quantify GAV infection loads in different gill filaments and pleopods sampled from individual P. monodon with naturally acquired infections, to compare the sensitivity and variability within either tissue type. To understand how GAV may vary in situations where natural, rather than artificial infections, will be encountered – such as screening shrimp from farm ponds or wild-caught broodstock – we used naturally-infected animals. We also sampled both lymphoid organ lobes from a subset of adult P. monodon to compare the sensitivity of detection of GAV in the gill and pleopod tissue, compared to the lymphoid organ, which is the recommended target tissue for GAV.

The lead author was supported by an Australian Government Research Training Program Scholarship, and funding for this work originated from the Australian Research Council Industrial Transformation Research Program IH130200013.

For detailed descriptions of the procedures for RNA extraction, cDNA synthesis and real-time qPCR; and statistical analyses, please refer to the original publication or the first author.

The precision of technical replicates was generally high, except for some with samples very low GAV infection loads and had more variable standard deviation values. Reduced precision may affect the accuracy of detecting and quantifying GAV infection and is anticipated as GAV RNA template numbers in each reaction approach the RT-qPCR test detection sensitivity limit.

The GAV infection loads detected in individual filaments and/or pleopods sampled from each shrimp frequently varied by more than 10-fold, and in some shrimp by up to about 3,000-fold. The scale of variability was evident in both groups of P. monodon irrespective of the severity of GAV infection. Similar infection load variability, including false negatives, have been recognized among pleopods sampled from individual Pacific white shrimp (Penaeus vannamei) infected at low-levels with White Spot Syndrome Virus (WSSV), and could possibly occur with other shrimp pathogens.

Our results emphasize the potential for pathogen infections to be missed when using single-tissue samples, especially in shrimp with low-level natural infections. It is difficult to predict the minimum required number of gill filament or pleopod samples, but based on the juvenile shrimp in this study as an example, the minimum number of gill filament or pleopod samples that would have been required to get 100 percent prevalence was five and seven, respectively. In the adult shrimp, a single tissue sample would have been enough if all samples tested positive, emphasizing the specificity of a minimum sample number to the groups being tested.

Infection misdiagnosis could have serious consequences in breeding programs for black tiger shrimp where wild broodstock are usually selected for breeding based on their testing PCR-negative for specific pathogens (specific pathogen free, or SPF). Our data shows that testing of a single gill filament or pleopod could increase the risk of a false negative and missed infection, resulting in the possible vertical transmission of the pathogen to seedstock and then to farm ponds or other SPF broodstock.

For broodstock, it may be more appropriate to carry out multiple successive PCR tests, preferably using pools of more than one tissue sample, during the quarantine of wild broodstock before they are selected for use in SPF breeding programs. Or as an alternative, increasing the number of shrimp tested to increase the accuracy of prevalence estimates when screening at the population level.

The large variability in GAV infection loads among individual gill filaments or pleopods in some shrimp – in addition to potential false negative detections – can produce inaccurate data on infection loadings and may minimize infection severity when sampling a single gill filament or pleopod. This could impact the accuracy of relative comparisons made between individual shrimp, because without accurate data on an individual’s pathogen infection load, the ability to estimate with any confidence genetic contributions to variation among individuals or family lines will be seriously disadvantaged.

The GAV infection loads quantified in each of the lymphoid organ lobes from Group 2 adult shrimp were distinctly higher (435- to 856-fold) and varied far less compared to those detected among either pleopods or gill filaments from the same shrimp, which is consistent with previous analyses of GAV-infected P. monodon that found higher levels of GAV in the lymphoid organ.

Despite the lymphoid organ being the optimal tissue sample for detection sensitivity for GAV, there are cases when sampling this organ is not appropriate, because it requires sacrificing the animal (usually not an option in shrimp-breeding situations), it is difficult to sample on small animals and it can be wearisome to locate and dissect during high-throughput screening. Therefore, alternative tissues like gill and pleopod are often used as they can be sampled non-destructively and efficiently under most scenarios.

Therefore, our data suggests neither tissue is more advantageous for producing accurate GAV infection load data, so the decision on which tissue type (pleopod or gill) to sample depends on which is most appropriate to the collection and laboratory procedures. Differences in the amount of total RNA isolated per μg of tissue may exist and affect relative comparisons made between tissue types.

The results of our study on shrimp with naturally acquired GAV infections proved that infection loads could considerably differ among different gill filaments and pleopods sampled from the same shrimp. Consequently, testing of a single sample of these tissues can underestimate the severity of infection or even result in a misdiagnosis of an infected animal.

When sampling of the lymphoid organ is not possible, the testing of pools of tissue from two or more gill filaments/pleopods is therefore recommended to bypass this variability and to generate more accurate data on GAV infection presence and severity. 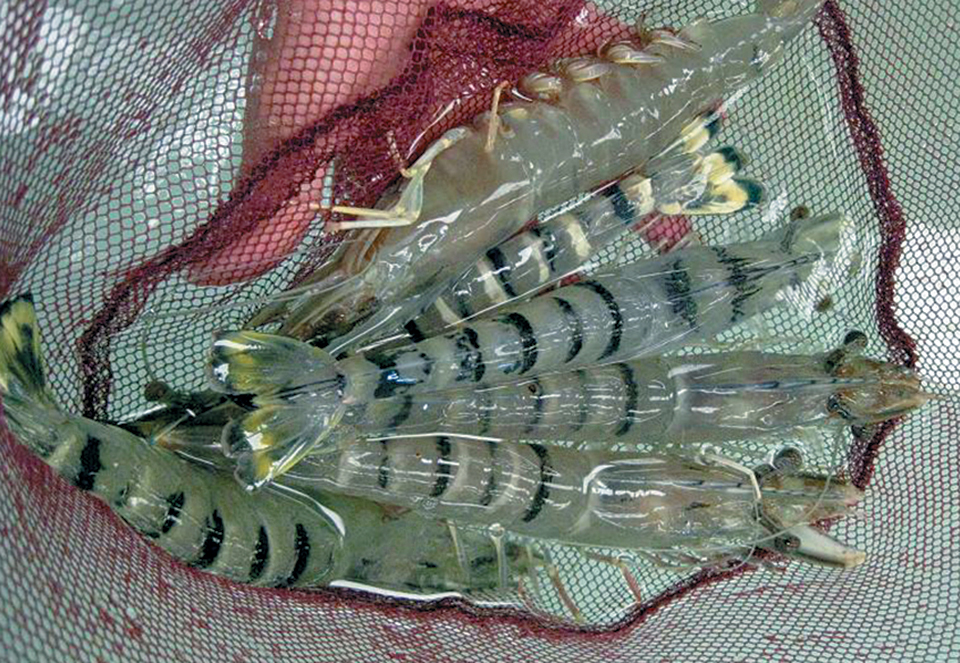 Since 2001, Moana Technologies has worked toward providing domesticated, genetically improved and specific pathogen-free (SPF) black tiger shrimp to farmers in Asia. Based in Hawaii, USA, Moana built a breeding base on wild-caught broodstock from seven locations in Asia.