Loose Shell Syndrome (LSS) was first reported in India in 1998, and its incidence has increased every year. During 1998-1999, LSS was reported in about 23 percent and 14 percent of facilities in summer and winter, respectively, at the shrimp farms around the Vellar estuary in Tamil Nadu in southern India. A 2003 study by Marine Products Export Development Authority (MPEDA) and the Network of Aquaculture Centres in Asia-Pacific (NACA) reported an LSS incidence of about 27 percent at extensive shrimp farms in West Godavari and 5 percent in Nellore. During a 2004 workshop on the LSS problem, the Society of Aquaculture Professionals reported that more than 50 percent of farms surveyed in 2002 had incidents of LSS.

The MPEDA/NACA study suggested that the cause of LSS was probably chronic bacterial infections and toxic pond bottom conditions. The clinical signs, and gross pathology of LSS closely resemble those of Necrotizing Hepatopancreatitis (NHP) reported in Pacific white shrimp (Litopenaeus vannamei) from the Americas. The Society of Aquaculture Professionals concluded in 2004 that algal toxin(s), NHP, or a new pathogen could be involved in LSS.

Through 2002, LSS was recorded in shrimp of less than 20 grams. In 2006, smaller 8- to 10-gram shrimp were also affected within about 50 days of culture. The disease has been observed in ponds with stocking densities as low as 3-15 animals per square meter and at salinity ranges of 28 to 60 ppt.

Affected shrimp are lethargic, spongy, and flaccid; feed poorly; and show a gap between the muscle and the shell. Occasionally they have a pinkish discoloration of the branchiostegite, pleopods, and lower abdominal segments. Farmers also sometimes report a whitening of the abdomen in shrimp before the onset of LSS.

Shrimp growth is poor due to impaired molting. Moribund, weak shrimp with muscular dystrophy appear on pond edges, and in affected ponds, shrimp populations have low-level, progressive mortality. The problem can go unnoticed initially, when only sporadic mortality episodes are reported.

The authors carried out a monitoring study during the summer crop of 2006 at four farms of 0.8-1.0 ha pond area in the states of Andhra Pradesh and Tamil Nadu in India. The water sources were the sea, bore wells, and creeks. Stocking densities ranged 3-12 shrimp per square meter (Table 1).

Data on soil and water quality, microalgal density, bacterial load and shrimp health was periodically collected for two ponds at each farm. Shrimp at three of the farms developed LSS, while the farm near Pattukottai had no disease problems, shrimp survival rates of 82 and 85 percent, and good production. At the other farms the occurrence of LSS resulted in reduced average shrimp body weight, biomass, and survival.

During the 2006 summer crop, about 473 ha of a total of 2,162 ha surveyed in Andhra Pradesh and Tamil Nadu showed LSS incidence. Some farmers have reported that they overcame LSS by adopting good management practices in maintaining water quality and optimum algal blooms in their ponds.

During the study, Vibrio, Flavobacterium, Pseudomonas, Acinetobacter and Moraxella species were isolated from haemolymph samples drawn from the ventral sinuses of LSS-affected shrimp. Bacterial counts in these samples ranged 50 to 39,000 colony-forming units (CFU)/ml. Thirteen samples of hepatopancreas from acutely LSS-affected shrimp were screened using a commercial polymerase chain reaction kit for the presence of NHP-causing proteobacteria, but no samples tested positive.

Hepatopancreas homogenate and minced muscle meat preparations of affected animals were fed once at 5 percent of biomass to healthy tiger shrimp of 14- to 18-gram size. Signs of LSS were first noticed on the fifth day after challenge in animals fed minced muscle meat and on day six in animals fed hepatopancreas homogenate. Electron microscope observations of fractions from hepatopancreas tissue homogenate of LSS-affected shrimp indicated the presence of viral-like particles, but further studies with more samples are required for confirmation.

Marked general atrophy of the hepatopancreas tubules, intertubular edema, nodulation, and low levels of lipid storage in R hepatopancreas cells were observed in LSS-affected shrimp (Fig. 1). Histological examination of the lymphoid organs of these animals revealed lumen enlargement, diffused necrosis with reduction in the number of stromal matrix cells, and separation of tubules.

While similar disease problems have not been reported in shrimp-farming regions outside the Indian subcontinent, the effects of LSS have posed a serious challenge to black tiger shrimp farmers in India. Yet the condition’s etiology remains to be clearly identified.

The authors’ preliminary investigation suggested the involvement of an infectious agent. The association between frequent fluctuations in algal blooms, including the presence of toxicogenic microalgal species, increased bacterial loads, and higher ammonia levels in LSS-affected ponds is still not clear. Good management practices to maintain adequate water quality could help control LSS incidence, but further research work is still required. 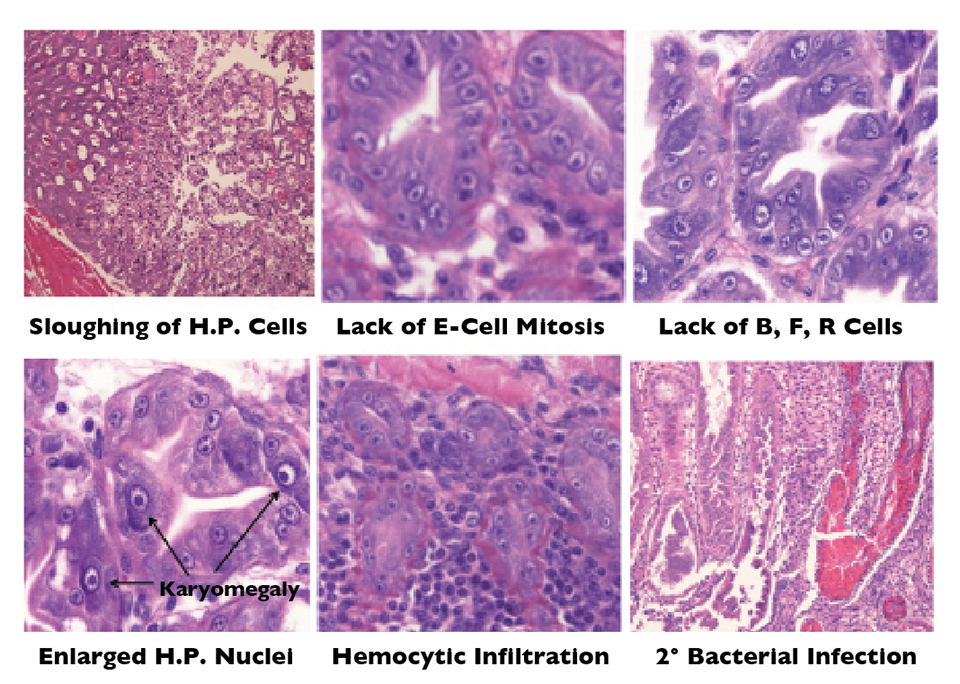 The emerging disease Early Mortality Syndrome has caused large losses among shrimp farmers. EMS is characterized by mass mortalities during the first 30 days of culture.

The production of early generations of domesticated broodstock in open-environment ponds may have hampered the domestication of black tiger shrimp.