Yellowfin tuna are pelagic (open ocean) fish, and are difficult to study in their natural habitat. Although Thunnus albacares is the most important tuna species taken by the surface fishery in the eastern Pacific Ocean, little is known of its reproductive activities and egg, larval, and early-juvenile stages.

The Inter-American Tropical Tuna Commission (IATTC) conducts research on tunas and related species in the region, and recommends appropriate conservation measures for them. To better understand aspects of tuna biology, the IATTC established a research laboratory on the southern tip of the Azuero Peninsula, adjacent to Achotines Bay on the Pacific side of the Republic of Panama.

The Achotines Laboratory was inaugurated in 1985. Early research through 1993 involved laboratory and field studies of early life stages of nearshore tropical tunas. During 1991, a small group of black skipjack tuna (Euthynnus lineatus) was reared from the late-larval stage (15 mm) to mature adult (29-36 cm) in a 6.3-meter diameter tank.

Additional black skipjack were established as spawning broodstock for several years. Through 1993, studies of eggs and larvae were limited by the facility’s ability to produce mass quantities of the algae, rotifers, and other food items needed to rear the larvae.

In 1993, a joint project was initiated at the Achotines Laboratory by the IATTC, the Overseas Fishery Cooperation Foundation of Japan, and the government of Panama. Its objective was to investigate the culture and captive spawning of yellowfin tuna, snapper (Lutjanidae) and corvina (Sciaenidae) in land-based tanks to provide eggs, larvae, and juveniles for research purposes. The infrastructure expansion necessary to hold yellowfin tuna broodstock and provide cultured food items for their larvae was completed by mid-1996.

The research facilities of the Achotines Laboratory include one 1,300-cubic-meter, two 170-cubic-meter, and three 85-cubic-meter circular, concrete tanks for broodstock fish contained in a 1,300-square-meter roofed building with open walls. Other buildings contain facilities for egg incubation, larval and juvenile rearing, and algae and rotifer production. A library, analytical laboratory, and DNA laboratory are located on site, in addition to housing for scientists, a workshop, and a pier in Achotines Bay for vessel operations.

The 1,300-cubic-meter main broodstock tank (T1) was designed to be large enough to reduce the stress of captivity and enhance the chances of yellowfin spawning. Translucent panels in the roof above the tank allow exposure to a natural photoperiod. An aeration tower is used to aerate and degas the make-up and recirculated water, and a slow sand filter provides mechanical and biological filtration.

About 10 percent of the water pumped to the aeration tower is diverted to a foam fractionator to remove small particles and dissolved organics. Make-up water is filtered to 16 μ and passed through an ultraviolet sterilizer before entering the tank. With make-up and recirculated water, T1 receives about seven complete exchanges of water daily.

Beginning in early 1996, yellowfin were collected in nearshore waters within 12 km of Achotines Bay. The fish were caught by rod and reel or handlines, utilizing barbless hooks. The fish were brought back in a 7.6-m launch with a 600-l live tank, and moved from the beach to the laboratory in water-filled plastic bags suspended in a tank. At the laboratory, the fish were measured, weighed, injected with oxytetracycline, and mark-ed with a microchip implant tag to identify each individual.

The yellowfin were then placed in an acclimation tank, where they were given prophylactic treatments for ectoparasites and superficial bacterial infections. After two to five days in the acclimation tanks, they were moved to a broodstock tank. About 50 percent of the yellowfin that were caught 1996-1998 survived the capture and transport phase, and about 30 percent were healthy enough to use as broodstock fish (Fig. 1). In January 2001, the main broodstock tank contained 21 yellowfin, ranging 13 to 97 kg in weight, with a total biomass of about 560 kg.

The broodstock yellowfin are fed a diet of squid, herring and anchovy, supplemented with vitamins and minerals. Daily food rations are regulated by the feeding activity of the fish, which closely reflects their size- and temperature-dependent energy requirements. A bioenergetics model has been used to assure the ration is sufficient to fulfill energy demands for metabolism, growth, and spawning, but avoid excessive fat build-up in the broodstock – a problem in other tuna culture facilities.

The yellowfin were found to eat decreasing daily rations (percent body weight per day) and increasing calories with size and age. Daily rations ranged 1.0 to 9.9 percent body weight per day, and caloric consumption ranged 9.2 to 104.2 kilocalories per kilogram. Food conversion ratios measured from 1996 through 1999 ranged 10.9 to 34.6, with an average of 18.2. Some of these ratios are quite high because we tried to maintain a low-calorie diet.

In general, the health of the broodstock tuna in T1 has been excellent. Over the past five years, the main cause of mortalities in the tank has been wall strikes. Some of the fish suffered vision impairment or loss because of abrasions that occurred in the tank, or because scar tissue from an old injury grew over one or both eyes. Such visually impaired fish were unable to feed properly, and were removed from the tank. No outbreaks of infectious diseases or parasites occurred.

Yellowfin have spawned naturally year-round in T1 since October 1996. The larvae hatched from eggs spawned in captivity have been used in laboratory experiments to examine growth and survival during early life stages (Fig. 2). These studies were designed to understand the factors that influence survival during pre-recruit life stages. The results can also be applied to rearing studies of young tunas.

Studies to date have focused mainly on the larval stages. Juveniles have been cultured for up to 100 days, and are routinely reared up to six weeks after hatching (Fig. 3). Efforts to raise large numbers of juveniles have been limited, with one recent trial resulting in about 2 percent survival, and growth to about 25 mm length, after 30 days of culture.

While scientific research is the main goal at the Achotines Laboratory, techniques developed here over the past five years could be applied to resource enhancement or commercial aquaculture. Snapper and corvina have been successfully spawned and raised to young adults at Achotines, and efforts will continue to do the same with yellowfin tuna. 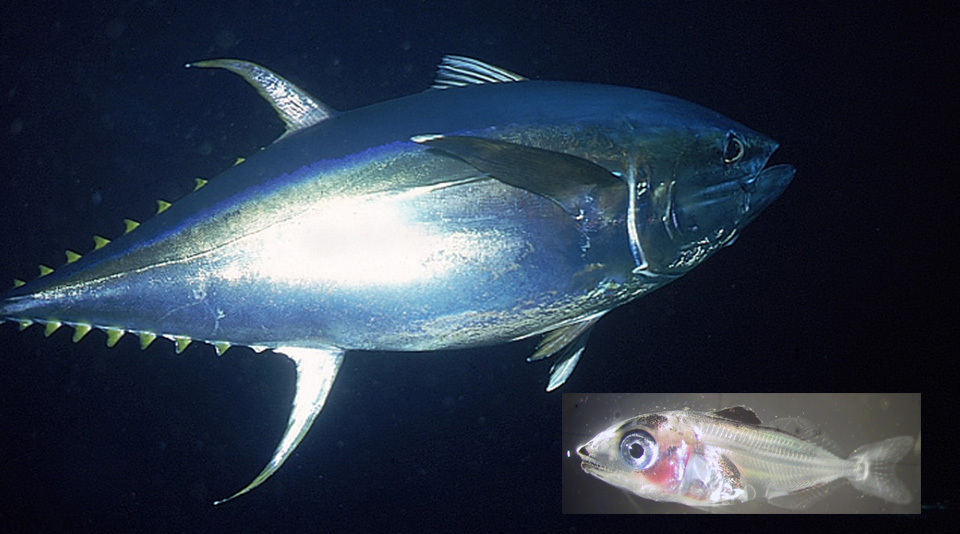 Research at the Achotines Laboratory on the southern tip of the Azuero Peninsula of Panama centers on larval tuna biology. 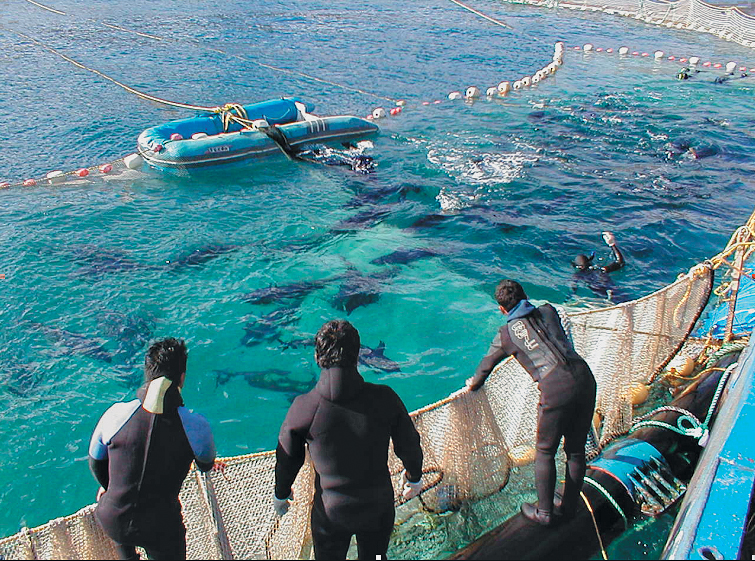 One of the chief limitations for the tuna aquaculture industry is its primary dependence on diminishing wild fish to stock marine cages. 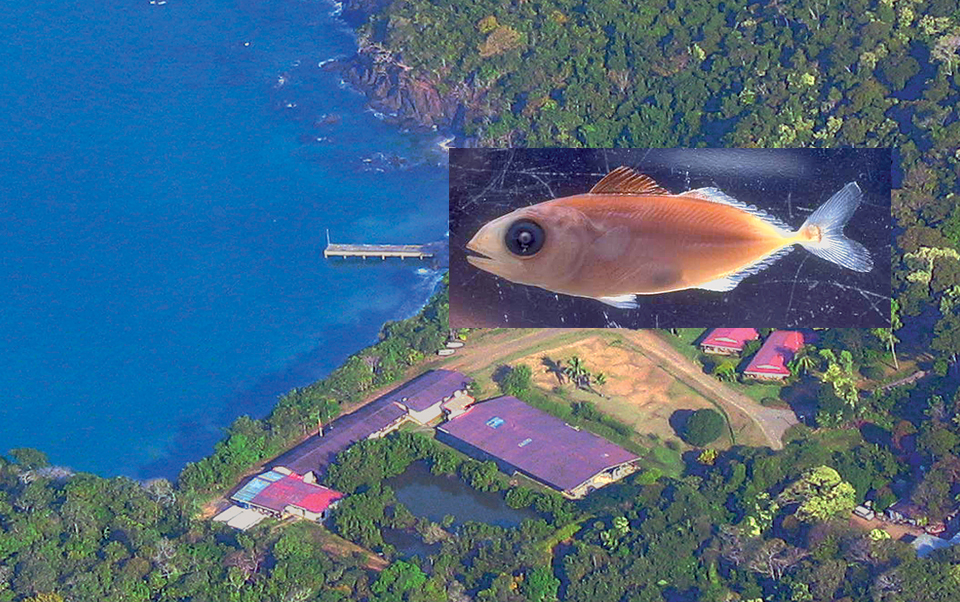 Research at the Acho­tines Laboratory in Panama has been inconclusive involving probiotic treatments of first-feeding larval tuna and the roti­fers they eat.