Integrated multi-trophic aquaculture (IMTA) systems not only produce valuable biomass, but also provide waste reduction services. Once nutrients enter coastal ecosystems, the use of extractive species in IMTA is one of the few cost-effective options for treatment.

With an appropriate composition of co-cultured species, IMTA can reduce the amounts of organic and inorganic nitrogen, carbon and phosphorus, making extractive aquaculture a good candidate for nutrient trading credits (NTCs). Preliminary calculations for a relatively small-scale IMTA project on the eastern coast of Canada, for example, indicated that the annual harvesting of kelp would equate to the removal of 35.75 metric tons (MT) of nitrogen from the ecosystem, representing an NTC of U.S. $357,504 to 1,072,512.

The same could be applied to another key nutrient, phosphorus. With a removal of 4.09 MT and a value of $4/kg removed, this would represent another contribution to the NTC of $16,343 – a much smaller amount, but it could also be an important way of extracting phosphorus at a time when some are predicting a shortage of the element.

Carbon trading credits (CTCs) could also be calculated. There may be arguments about what is meant by trapping and sequestering carbon. Some may argue that it should be reserved to long-term geological storage (sink) and not transient storage.

If temporary removal of carbon from the ocean can be credited for potentially increasing seawater pH and absorbing carbon dioxide from the atmosphere and/or cultivated animals, it can be calculated that with a value for carbon removal around $30/MT, this would represent a removal of 306.43 MT and a CTC of $9,193 – a larger amount of carbon, but with a much smaller value, underlining the difficulty in removing dissolved nutrients from aquatic systems and the acute issue of their presence in coastal systems.

Similar calculations could be applied to the organic extractive component of IMTA. In the case of shellfish, accumulation of nitrogen, phosphorus and carbon should be considered both in meat and shells, which are especially rich in calcium carbonates.

At a much larger scale, the occurrence of large and recurrent “green tides” should also be brought into focus. The green tide that washed into Qingdao, China, just before the sailing competitions of the 2008 Olympic Games got a lot of attention.

Within three weeks, 1 million MT of Ulva prolifera seaweed were removed from the vicinity of Qingdao to allow the sailors and windsurfers to compete, while an estimated 2 million MT of U. prolifera sank to the bottom. The harvesting of 1 million MT equated to between 3,000 and 5,000 MT of nitrogen removal for an NTC value of $30 million to $150 million! Additional NTCs of $1.6 million for the removal of 400 MT of phosphorus and CTC of $900,000 for the removal of 30,000 MT of carbon should also be considered.

Green tides are not the cause, but the unintentional consequence of coastal eutrophication. Obviously, it would be beneficial to reduce nutrient loading at the source, but this may not be possible in the present context of economic development along China’s coastal zone.

The problem is that U. prolifera is presently an unwanted and uncontrolled nuisance species of limited commercial value. To control its proliferation, the solution may be to create a competition for nutrients by intentionally cultivating algal species, which not only carry on the biomitigation, but also have a commercial value, where U. prolifera starts to enter the coastal environment.

This time, the IMTA concept has to be interpreted as an integrated land pond/coastal aquaculture system in a supra-integrated coastal zone management effort that goes beyond provincial borders to address issues at the Yellow Sea scale. Establishing and implementing a structure for the payment of credits or incentives for these biomitigating services will be a delicate matter. A lot of regulatory details will have to be worked out before this complex scheme becomes reality.

Presently, the most advanced IMTA systems in open marine waters and land-based operations have three components – fish, suspension feeders or grazers such as shellfish, and seaweed, in cages, rafts or floating lines – but they are admittedly simplified systems. More advanced systems will have several other components (e.g., crustaceans in midwater reefs; deposit feeders such as sea cucumbers, sea urchins and polychaetes in bottom cages or suspended trays; and bottom-dwelling fish in bottom cages) to perform either different or similar functions, but for various size ranges of particles, or selected for their presence at different times of the year.

The most advanced IMTA systems near or at commercial scale can be found in Canada, Chile, South Africa, Israel and China. Ongoing research projects related to the development of IMTA are taking place in the United Kingdom, Ireland, Spain, Portugal, France, Turkey, Norway, Japan, Korea, Thailand, United States and Mexico. It will also be interesting to observe how new seaweed cultivation for biofuel production initiatives in different parts of the world could be an additional driver for IMTA practices.

Most current aquaculture business models do not consider the economic value of the biomitigation services provided by biofilters, as there is often no cost associated with aquaculture discharges/effluents in land-based or open-water systems. Appropriate regulatory and policy frameworks and financial incentive tools may therefore be required to clearly recognize the benefits of the extractive components of IMTA systems.

Better estimates of the overall costs and benefits to nature and society of aquaculture waste and its mitigation would create powerful financial and regulatory incentives to governments and the industry to jointly invest in the IMTA approach, as the economic demonstration of its validity would be even more obvious. Moreover, by implementing better management practices, the aquaculture industry should increase its societal acceptability, a variable to which it is difficult to give a monetary value, but an imperative condition for the development of its full potential. Reducing environmental and economic risks in the long term should also make financing easier to obtain from banking institutions.

Consumers’ attitudes may also have to change as they come to accept eating products cultured in the marine environment in the same way they accept eating products from recycling and organic agricultural practices – products for which they are willing to pay a higher price for the perceived quality or ethical premiums. The differentiation of IMTA products through traceability and ecolabeling will be key for their recognition and command of premium market prices.

Some have argued that the adoption of IMTA in the western world is slow. For example, on the east coast of Canada, there were obviously no IMTA sites in the Bay of Fundy in 2001 when IMTA research started. Nine years later, eight of the 96 finfish sites in southwestern New Brunswick practice salmon (or cod)/mussel/kelp production, and eight other sites have been amended to develop IMTA.

This is a respectable conversion of almost 16 percent in nine years. Moreover, it would not be reasonable to anticipate an instant conversion, as the industry needs to develop markets to absorb the co-cultured biomass. This takes time and can only be progressive.

Several IMTA projects worldwide have now accumulated enough data to support proof of the concept at the biological level. The next step is the scaling up of more experimental systems to commercial scale to further document the economic and social advantages of IMTA, which will be key to offering it to practitioners of monospecific aquaculture as a viable option. Emerging sustainable aquaculture approaches must generate net economic benefits for society if they are to be advocated.

A major rethinking is needed regarding the definition of “aquaculture farms” by reinterpreting the notion of site-lease areas and regarding how they work within ecosystems in the context of a broader framework. Within integrated coastal zone management, integration can range from the small scale of a leased site with spatial limits to the larger scale of a region connected by the functionalities of the overall ecosystem.

Selecting the right combination of species will be critical. They will have to be appropriate for the habitat; the available culture technologies and labor forces; and the environmental, climatic and oceanographic conditions. They will have to be complementary in their ecosystem functions, grow to a significant biomass for efficient biomitigation, command an interesting price as raw material or present added value for their derived products. Their commercialization should not generate insurmountable regulatory hurdles.

Economic analyses will have to recognize and account for the values of the environmental/societal services of extractive crops to estimate the true value of these IMTA components. They will have to include the impacts of organic and other ecolabelings, the value of biomitigating services for enhanced ecosystem resilience, the savings due to multi-trophic conversion of feed and energy that would otherwise be lost, and the reduction of risks through crop diversification and increased societal acceptability.

This would create economic incentives to encourage aquaculturists to further develop and implement sustainable marine agronomy practices such as IMTA. Seaweeds and invertebrates produced in IMTA systems should be considered candidates for nutrient/carbon trading credits within the broader context of ecosystem goods and services. Long-term planning/zoning promoting biomitigation solutions such as IMTA should become an integral part of coastal regulatory and management frameworks.

Nutrient-extractive aquaculture appears to be a viable ecological engineering option for managing/internalizing some of the externalities generated by aquaculture operations. Moreover, IMTA, while not entering directly the debate regarding the inclusion of fishmeal and fish oil in commercial fish feeds, could provide a partial solution.

Modern commercial salmon diets contain much less fishmeal (15 to 25 percent) and fish oil (15 to 20 percent) than they did less than 10 years ago (40 to 60 percent). Byproducts such as trimmings and offal from wild catch fisheries are now used to supply a major portion of the fishmeal ingredients. Some non-governmental organizations arguing for fishmeal and fish oil replacement have also voiced concerns that, after all, marine fish should eat marine ingredients. Obviously, one cannot have it both ways!

Turning toward land plant proteins is not without its impacts. Extra farmland area would be required, which would likely increase deforestation and need to be irrigated on a planet already suffering from water availability problems. The price of some staple food crops like corn and soya used in traditional agriculture would rise considerably due to competition for their uses, as recently seen when they were sought as energy crops for the production of biofuels. Partial substitution with organisms already living in water, such as seaweeds, could, in fact, be a very interesting option and fit well within the sustainability and management concept of IMTA.

Editor’s Note: Part I of this article, which describes the ecosystem approach and varied benefits of IMTA systems, was printed in the September/October 2010 Global Aquaculture Advocate. 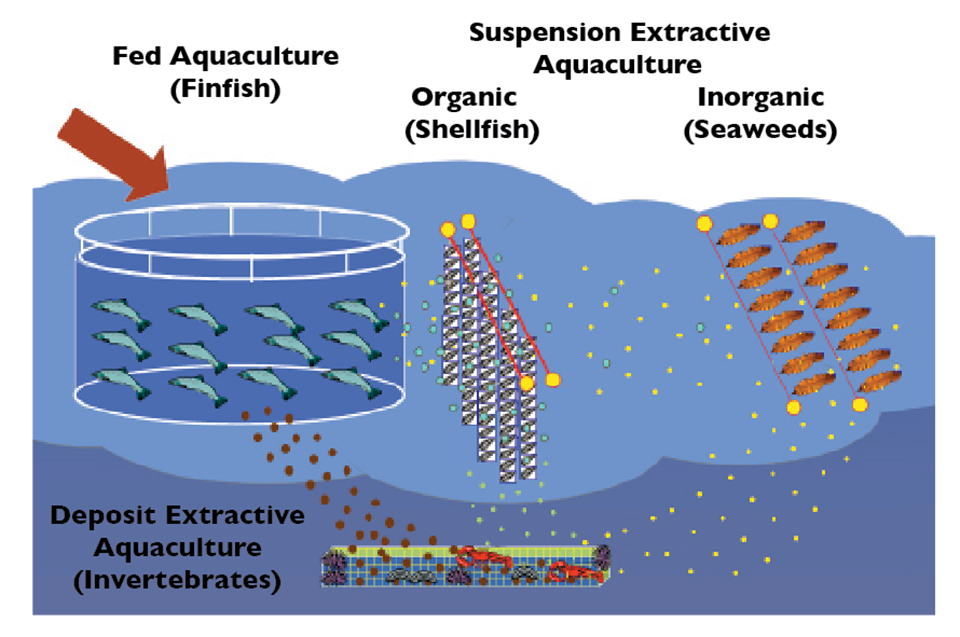