New Zealand company builds a transformational, semi-automated oyster growing system that has changed what ‘working’ for the company means

Growing 15 million oysters per year, Aaron Pannell, owner of Marlborough Oysters in New Zealand, is no stranger to the hard-knock life. From dealing with biofouling and inconsistent oyster condition to warding off pests and undertaking generally back-breaking work, he’s spent more than a decade problem-solving on the water. But faced with severe storms and faltering equipment, Pannell pioneered a solution that’s not only changed the very makeup of his business, it’s also been selected as a finalist for the Global Seafood Alliance’s Global Aquaculture Innovation Award.

“We had a lot of staff – mostly young guys – and the work was physical, repetitive and relentless,” said Pannell. “At the same time, we were getting a lot of damage to our equipment from the storms we get in our area. We also had issues with disease, pests and poor quality. So, I decided we needed to overcome some of these issues.”

He started by looking for better equipment. The company’s existing oyster-farming system involved clipping plastic bags to lines that floated on the surface. But every severe storm would cause the company to lose on average 1 percent of its equipment from the lines, which amounted to roughly 400 bags per event. As Pannell said, losing bags was “not good for the environment or the bank balance” and the extra work of cleaning up after storms and repairing gear “was hard on everybody.”

“We are two hours away from our farm, driving,” he said. “With a big storm on a Friday night, [I’d] think, ‘Do I go out there on a Saturday with the guys and try to fix it up or do I wait till Monday?’ That’s really bad for morale.”

Gear loss aside, oyster farming can be a labor-intensive process. The oysters require a certain amount of handling, and every two to three months they had to be removed from the lines, sorted into different size classes and put back out into fresh equipment to grow again. It took seven stages to turn the oysters during every sorting period.

“It was a lot of handling – individually handling one unit at a time,” said Pannell. “We had 40,000 bags and they all had to be sorted about every eight weeks. It’s a lot of work.”

The quest for a better system led Pannell and his team to pioneer FlipFarm – a semi-automated oyster growing system that permanently attaches Hexcyl Pro baskets to a backbone. It provides an ideal environment for oyster growth and conditioning, as well as the ability to efficiently control fouling levels, pests and predators. The system is also extremely easy, efficient and durable, reducing manual labor requirements and virtually eliminating equipment loss. It’s also adaptable to diverse growing environments and is now used by more than 70 farmers in 12 countries worldwide.

“In the future, we may start to change the design and then be able to push out into some of those areas that are more exposed,” said Pannell. “But at the moment, there’s a lot of water that suits the system.”

(Editor’s note: FlipFarm and the two other Global Aquaculture Innovation Award finalists will present at the final virtual GOAL session in mid-November and be sure to read our profiles on the other two finalists, Nucleic Sensing Systems and Ace Aquatec.)

The invention of FlipFarm was a bit of a fluke. After exploring several unsuitable options, Pannell walked by some Hexcyl baskets lying in a corner and wondered: “What would happen if we ran a line right through the middle of the basket?” He started “playing around with them” and realized the baskets were a viable alternative.

“The ‘eureka’ moment [came] the day that I picked up the line with the winch and all the baskets flipped around and sat on their floats,” he said. “I thought, ‘This is something we can use.’ It started the path to the FlipFarm concept.”

Could microalgae culture on a conveyor belt catch on?

A few modifications were made, like including an axle attached to the bottom of the basket, which acted as a spacer and as a secure attachment method, as well as designing a secure method to attach the float. As the team adapted the machinery and the automation, the process accelerated.

“Once we designed some handling machinery, we soon found that we had not only significantly sped up the process, but also taken most of the physical effort out of it,” said Pannell.

According to Pannell, the time and effort required for farm operations have been significantly reduced, as oysters were once emptied into containers on the farm site. Previously, the bags had to be removed from the lines, transported to the sorting shed, emptied and stored to kill biofouling. Then, the sorted oysters were re-bagged, transported back to the farm and reinstalled. Since the bags were bulky, this required numerous trips back and forth from the farm to transport all the oyster-filled bags to and from the sorting shed.

But now with the FlipFarm system, transport of gear became much easier because only the oysters need to be handled and the growing gear does not need to be transported, emptied, stored and refilled, thereby reducing staff and the size of land-based facilities.

Now, if you can stand on a boat, you can do the job. We have a nice range of people out there, which just adds so much more to the company.

“Now, we empty the FlipFarm baskets on the farm into containers, transporting only the oysters to the sorting shed, and once they have been sorted, transport only the oysters back to the farm and refill the FlipFarm baskets on the lines,” said Pannell. “This is not only much faster and easier due to the automation, but it only requires about a third of the vessel space as we are only transporting the oysters – not the growing equipment. This means we have reduced our vessel operations by around 70 percent.”

It also eliminated the need for a large shore space to store used bags while waiting for the biofouling to die before reuse. In an ideal situation, depending on the farm site, the sorting can now be done on the farm by emptying the oysters directly from the FlipFarm lines. In this case, the transport would be virtually nil.

With this new system in place, the company started to see some unexpected and transformational results.

“The thing we didn’t anticipate was the culture change in the company,” said Pannell. “That started with us being able to employ a different demographic of staff. Now, if you can stand on a boat, you can do the job. We have a nice range of people out there, which just adds so much more to the company.”

As Pannell elaborates, that “nice range” includes a diversity of genders, abilities and ages, people who might have previously been excluded from aquaculture because of the hard labor involved. Traditionally, oyster farming equipment has been handled manually, with repetitive lifting, often at difficult angles on unstable, slippery platforms. FlipFarm changed that by mechanizing farming operations with simple, low-tech machinery that’s safe and easy to operate, which reduces the risk of physical strain. The new system has freed up staff to focus on other priorities.

“Because they’re not physically exhausted, they’ve got time to actually stop and think,” said Pannell. “Our guys are thinking about innovation. How can we make the work easier? How can we make the quality of the oysters better? And because the operation is so much quicker, we’ve gone down to a four-day working week.”

FlipFarm isn’t the cheapest system on the market, but Pannell said that higher upfront capital cost is balanced out by the lower running expense and subsequent benefits. In Pannell’s case, the cost of the system was repaid in two years, excluding any additional savings from reduced labor. That “payback” has allowed Pannell to redirect funds towards other priorities, such as growing the business.

“We’ve reduced the number of staff that are out there just working the gear,” he said. “We’ve started to employ more specialist staff that have a science or engineering background to help us develop both the farming operation and the system.”

In talking about the return on investment, Pannell also saw a reduction in mortality and an improvement in the quality of the oysters. Historically, the company saw a 40 percent loss annually from disease, oystercatchers (predatory birds) and the sorting process. With the FlipFarm system, the losses are now averaging between 8 to 12 percent each year.

“When you’re growing 15 million oysters, that’s a lot of money,” said Pannell. “So, it really does pay back when you’re looking at the scale.”

Another benefit has been improved oyster quality. Previously, the company grew oysters to a juvenile stage and sold them to another company for finishing and exporting. As Pannell explains, the oyster growing area involved working in “skinny water,” which is “quite hard to condition oysters,” and with no option to dry oysters through intertidal farming. The FlipFarm system changed that.

“We’ve got the ability to dry our oysters on demand, whenever we want,” said Pannell. “We are now growing our oysters all the way through to export. That’s really changed the economics of our company. We’re getting a lot more for our oysters.”

“We wouldn’t have been able to do that without FlipFarm. Our previous system, the quality just wasn’t good enough. Now, we’ve won New Zealand’s top oyster for the last four years.”

Eliminating gear loss has also been a win for the team. While there’s no recorded data right now, Pannell said that they no longer lose equipment from the farm anymore, so long as the equipment is put in the right location. For Pannell, it’s one of the many “intangible benefits” of FlipFarm, along with no longer garbage-picking on the beach.

“The money’s nice ­– but when you lie in bed on a Friday night and hear the gale, and you know that when you go out there Monday, the farm will just look like it was when you left – that’s something you can’t put [value] on,” he said. “The quality of life has just improved so much since those early days.” 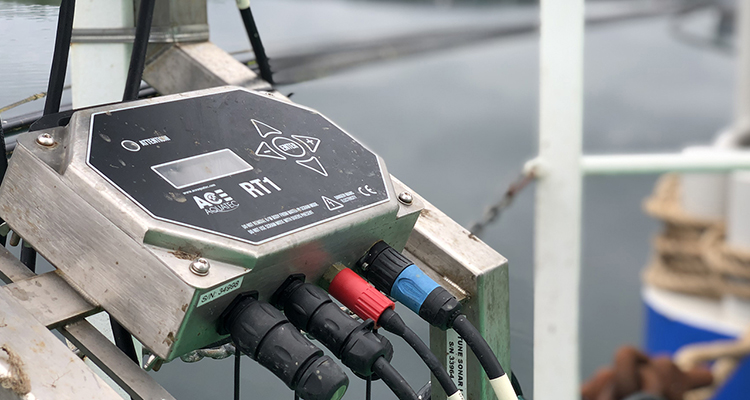 Ace Aquatec of Scotland returns as a finalist for the Global Aquaculture Innovation Award with a seal-deterrent technology for fish farmers. 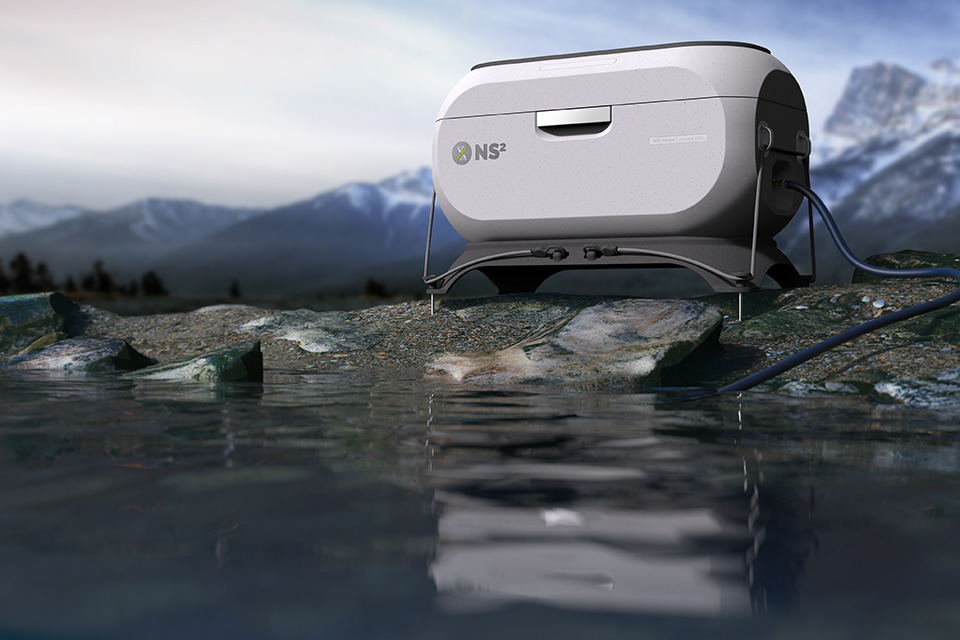 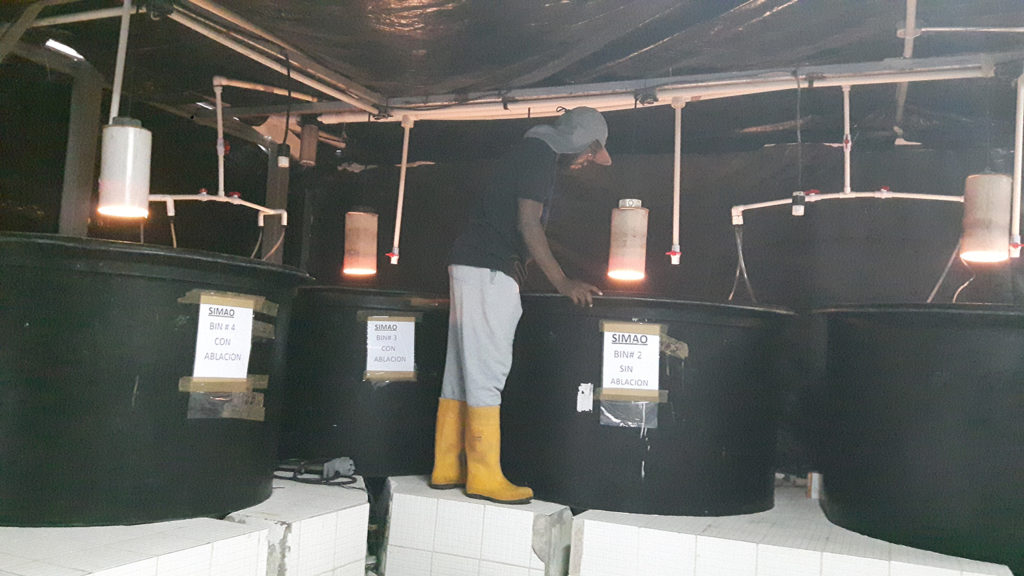