The rainbow trout (Oncorynchus mykiss) is a fish species native to North America, North Asia and Europe. It was introduced into Indian waters in the middle of the 18th century during the colonial rule over the Himalayan and Peninsular regions, where cold waters in sufficient quantity and adequate quality are available, supplied by the high-altitude, unique mountain ranges of the country’s Himalayan and Southern Peninsula areas.

Many of these are geographically difficult areas to work in, but they also offer excellent, very large habitats in the form of rivers, streams, lakes and tributaries suitable for trout. Appropriate locations for trout culture are common in the states of Jammu and Kashmir (JK), Himachal Pradesh (HP), Uttarakhand (UK), Sikkim, Arunachal Pradesh (Ar. P), Western Ghats of Tamil Nadu (TN) and Kerala and, to some extent, in North Bengal, Manipur, Meghalaya and Nagaland.

The introduction of rainbow trout in the Southern Peninsula, in the cold waters of the Nilgris, Kodaikanal and Munnar high range, has been successful and the species has developed self-sustaining populations in several water bodies. The annual temperature range in the region is 0 to 25 degrees-C, and it benefits from the Southwest and Northeast monsoon with an average annual rainfall of 192 cm. This entire range, along with portions of Western Ghats, constitutes India’s first “Biosphere Reserve.”

Organized attempts for the culture of exotic (introduced) fish species in India’s upland regions first began in the year 1863, with the introduction of the brown trout and later the rainbow trout. However, the expansion to commercial-scale aquaculture activities did not pick up mainly due to infrastructure and husbandry management.

The establishment and expansion of trout culture in India was supported by various international agencies. Some of the most important ones include the European Union, which assisted a project in Jammu and Kashmir in association with Fish Farms Development Internationals (FFDI) of Scotland and Rambell and Hanneman of Denmark. Equipment and machinery was procured from Ottevanger, Holland, in 1984, and this project is still a landmark milestone in the development of trout culture in India.

Also, in the State of Himachal Pradesh during 1989, the Norwegian government funded a project for the transfer of technology and production phase. This project magnificently established trout activities in that state. And another project called Fish Health Studies under rainbow trout farming was implemented in association with the National Veterinary Institute from Oslo, Norway. This project achieved major targets, including disease control and training of technicians, and successfully revived trout culture in the state of HP.

Indian production of trout is negligible when seen in the global scenario, adding up only a few hundred tons to annual world productions. Only two states, Jammu & Kashmir and Himachal Pradesh, are worth mentioning and contribute around 250 to 300 MT and 100 MT, respectively. Sikkim is the next upcoming state where sizable production is expected to develop. There is no private participation in infrastructure development for trout farming in India. Only the states of Jammu and Kashmir, and Himachal Pradesh have the basic infrastructure for seedstock and feed production, and only in the government sector. Other producer states operate at the lowest levels. Trout-related infrastructure facilities available at the various states are listed in Table 1.

Most of the producing states take care of adequate capacity building of farmers. Farmers are essentially trained by their respective provincial governments, with extension workers taking care of technical assistance and regular hand-holding. Hatcheries do operate optimally, as the personnel are trained by foreign experts. Farmers are encouraged to adhere to good aquaculture practices, as trout farming is very sensitive to pathogens and nutritional deficiencies.

There are many commercial outputs from rainbow trout culture, which include sale of fresh fish to consumers, of fingerlings for restocking of rivers and lakes, and products from hatcheries like eggs and juveniles are sold to other farms. Supply of formulated aquafeed to growers is another important upcoming activity.

Presently, the sale of fish is confined to local markets. For example, Himachal Pradesh supplies fish to the two nearby cities of Chandigarh and New Delhi. New trade channels are expected to develop soon, once production expands with upcoming additional infrastructure. No processing or value addition is done yet, as the significant demand for unprocessed product absorbs production.

To formulate future action plan for the development of trout fishery, a SWOT analysis for trout farming in India is a valuable baseline.

The strengths of the industry include: unexploited, cold-water natural resources in the form of rivers, springs, streams and lakes; well-tested, proven technologies, supported with field oriented projects; institutional support and basic infrastructure; sufficient funds for investment, with assured financial returns; and adequate gap in demand to supply local consumption as well as for exports. The weaknesses include the need for high-tech breeding and capital intensive culture methods; poor extension machinery in potential states, except for Jammu and Kashmir; tedious health and hygiene protocol in culture ponds; absence of cold chain, processing, value addition and marketing channels; and lack of confidence among potential farmers.

The opportunities are allocation of funds, projects and schemes by various funding agencies; employment avenues in rural areas; presence of breeding/seed production infrastructure; and adequate local consumption demands. And the threats are environmental degradation, damming of rivers, tributaries and streams; potential spread of infectious diseases; and the lack of networking among research institutes, government departments and other development agencies.

The National Fisheries Development Board (NFDB, India) has adopted an integrated approach to develop trout infrastructure in the potential states. It has released more than 140 million INR for the establishment of seventeen hatcheries (including renovations), two feed mills and 350 raceways in different parts in the last five years (Table 2).

In addition, sizeable funds from other organizations are also extended by the respective provincial governments. For example, the Directorate of Cold Water Fisheries (ICAR, Bheemtaal) is also supporting training and technology dissemination at various levels. And NFDB has funded various projects (Table 2) for the development of trout fisheries in the country.

Financial assistance extended by government agencies under various programs can be used for construction of production raceways, running water culture in earthen ponds, and for the establishment of hatcheries and feed mills.

To further expand the industry, a cluster-based, holistic development approach should cover all industry segments, including pond construction, fingerling production, and feed manufacturing and marketing to address various problems – mostly logistics – that commonly result from working in areas with challenging topography.

More involvement by the private sector is very important, especially in the seedstock and feed segments, to make the industry more competitive and resilient. Formulated, high-protein feeds are the most significant cost input, and therefore local formulations with indigenous ingredients are needed to improve the cost-benefit ratio of culture operations.

Another important industry need is long-term hand-holding and more effective extension support for capacity and confidence building of all stakeholders, to showcase the achievements among potential investors and entrepreneurs. Finally, large-scale operations should be developed in certain locations to apply and take advantage of economies of scale, in addition to supporting smaller, local farmers. 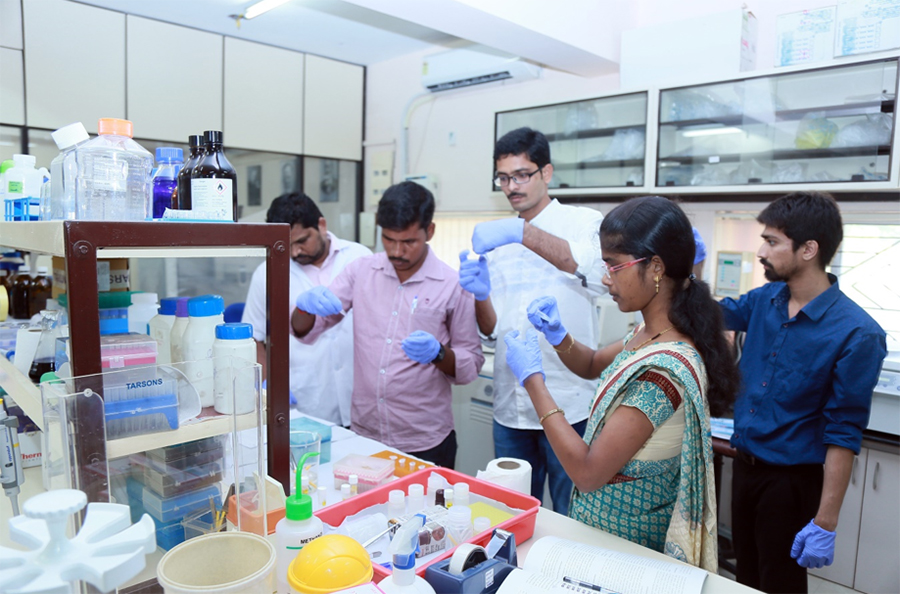 Training and harmonization of PCR diagnosis of WSSV in India