In situ hybridization and PCR effective at detecting microsporidian parasite

In penaeid shrimp, microsporidia infect host tissues such as muscle, heart, gonads, gills, hepatopancreas, and nerve ganglia, depending on the type of microsporidia. Shrimp microsporidia are considered a potential threat for their populations, and also lead an economic impact in aquaculture. Recently, a microsporidium, Enterocytozoon hepatopenaei (EHP), that replicates within the cytoplasmic area of the tubule epithelial cells in the hepatopancreas has been found in several shrimp farming countries in Asia including Vietnam, Thailand, Malaysia, Indonesia, China and India. The clinical signs of the EHP infection are not specific, and associated with growth retardation.

Histological examination of samples of EHP-infected Penaeus vannamei from Vietnam (2014) showed basophilic inclusions within the cytoplasm of hepatopancreas tubule epithelial cells of (Fig 1A & 1B). These inclusions appeared to be at plasmodia stage; mature, basophilic, spores were also observed. The EHP-infected P. stylirostris collected in Brunei (2006) were also showed the presence of microsporidium spores within the hepatopancreas (Fig. 1C). These results also indicate that EHP has been present in Asia since 2006.

We selected primers for detecting the EHP are EHP-510F (5’-GCCTGAGAGATGGCTCCCACG) and EHP-510R (5’-GCGTACTATCCCCAGAGCCCG) and PCR was performed with DNA extracted from EHP-infected shrimp. The results showed that this PCR can detect EHP-infected shrimp (Fig. 2, lane 1-3); the feces and water samples collected from infected shrimp tanks were also detected with EHP (Fig. 2, lanes 4 & 5). We also tested 2 other parasitic pathogens, an amoeba and the cotton shrimp disease microsporidium, but these EHP-primers did not cross react with them (Fig. 2, lane 6 & 7).

Unexpectedly, we detected EHP in 4 out of 9 samples of frozen Artemia biomass (Fig. 2, lane 9, a representative sample). From EHP-positive Artemia biomass, its 18S rRNA gene was amplified and sequenced, and the fragment was 99.9 percent identical to that of EHP from Vietnam, suggesting the EHP present in Artemia biomass may have originated from Southeast Asia.

By ISH with a digoxigenin-labeled EHP probe, the infected P. vannamei (Fig 4A) and the P. stylirostris (Fig 4B) showed the presence of microsporidium spores (basophilic inclusions) within the hepatopancreas, the tubule epithelial cells. The probe appears to be highly specific. No reaction was seen with Perezia penaei-infected P. monodon showing a clinical sign of cotton shrimp disease (Fig 4C).

Concerns of EHP infections in farmed shrimp populations are likely to continue, creating a need to reduce risk through the establishment of effective means to control and monitor this parasite. In this regard, the use of specific and sensitive molecular methods for the detection of EHP in shrimp, live feeds, and the pond environments will likely prove to be very important. EHP-infected shrimp cannot be determined by simple visual inspection; there are no obvious clinical signs of infection. Diagnostic protocols, based on PCR and ISH, developed in this study have proven to be both specific and sensitive, thus providing valuable tools for routine diagnosis and monitoring of shrimp stocks, pond environments and aquaculture commodities. 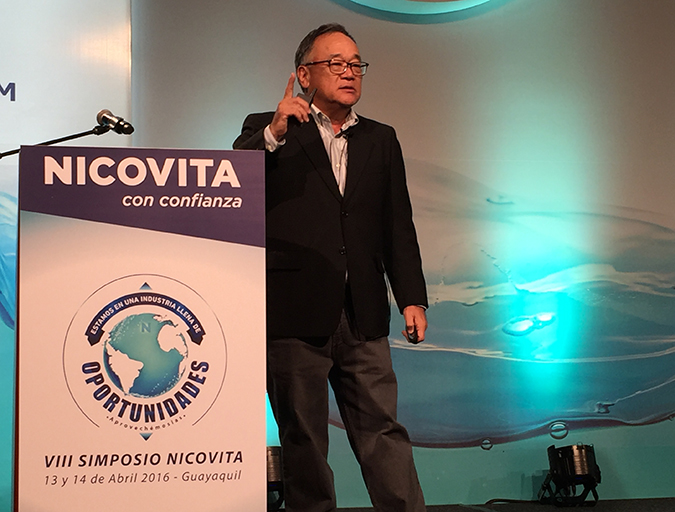 Shrimp farmers can look to the chicken-farming industry for guidance on proper pond management. At the Nicovita Symposium in Ecuador, Dr. Dean Akiyama of Charoen Pokphand encouraged shrimp producers to overcome challenges at hatchery level.