A wide range of infectious agents – including viral, bacterial, fungal and others – can affect cultured shrimp in hatcheries and farms. Vibrios are a group of well-recognized opportunistic pathogens that vibriosis in shrimp. A common practice in many shrimp hatcheries in China is to subject shrimp postlarvae 4 to 5 days old (PL4-5) to a gradual water salinity reduction, from around 20 ppt down to 4 to 5 ppt or even zero, then back to various salinities to suit the needs of different shrimp farmers.

The effect of this process has been demonstrated by researchers that reported that shrimp postlarvae (PLs) subjected to a gradual salinity reduction resulted in lower counts of Vibrios in the PLs. However, these researchers also mentioned that although this salinity reduction treatment enabled PLs to carry fewer Vibrios, whether it produced healthier PLs was not known.

In recent years, it has been reported from many shrimp growout farms in China that PL8-10 stocked in ponds frequently experienced symptoms of disease, such as white feces and even mortalities within 30 days, some as early as 8 to 10 days. One concern reported is if salinity reduction treatments that reduce or eliminate Vibrios in PLs could be affecting their gut microbiota and making the PLs less adaptable to various environments and/or more vulnerable to (potential) pathogenic attacks.

Many researchers have reported that a balanced microbial community structure is crucial in maintaining health and preventing diseases. Bdellovibrio and like organisms (BALOs) are a group of very small bacteria, naturally existing in terrestrial and/or aquatic ecosystems as well as in the intestine of various organisms including shrimp and humans. BALOs are very diverse but have a common feature: parasitizing and killing other bacteria. Significant research work shows that BALOs can be used to control Vibrios, to alter or restore a microbial community structure, and to promote growth and survival of cultured organisms.

This article – adapted and summarized from the original publication (Cao Q, F. Najnine, H. Han , B. Wu and J. Cai. 2020. BALOs Improved Gut Microbiota Health in Postlarval Shrimp (Litopenaeus vannamei) After Being Subjected to Salinity Reduction Treatment. Front. Microbiol.) – evaluated the effect of BALOs on the rearing of second-generation L. vannamei shrimp PLs after the animals had been subjected to a salinity reduction treatment, to assess if BALOs could restore PL gut microbiota, and if salinity reduction treatments have any impact on PL gut microbiota.

L. vannamei PL7-8 (body length: 0.7 to 0.8 cm on average) were sourced from a shrimp hatchery in Guangdong Province, China. They were second-generation PLs and had been subjected to salinity reduction treatment before the salinity was brought back to 15 ppt to meet our testing need. These PL7-8 were visually healthy with no apparent signs of diseases. Nine plastic, aerated tanks with boiled, 15 ppt water (to eliminate any microbial contamination) were used to randomly stock 70 PLs into each tank.

At the lab (South China University of Technology, Guangzhou, China), the PLs were divided into three treatment groups: CD, SD, and BD groups, each in triplicate. The treatments involved the applications of a euryhaline strain of BALOs, BDN-1F2 (treatment BD), and Bacillus subtilis (treatment SD) to the rearing of second-generation shrimp PLs after salinity reduction treatment so as to determine if they could impact PL gut microbiota. In the BD group, BDN-1F2 was added to a final concentration of 1 × 104 Plaque Forming Units, PFU per mL [a Plaque Forming Unit, PFU, is a measure used in virology to describe the number of virus particles capable of forming plaques per unit volume]. In the SD group, Bacillus subtilis GIM 1.136 was added to a final concentration of 1 × 106 Colony Forming Units, CFU per mL [a Colony Forming Unit, CFU, is used in microbiology to estimate the number of viable bacteria or fungal cells in a sample]. In the CD (control) group, nothing was added. BDN-1F2 and Bacillus subtilis GIM 1.136 were added to relevant groups once only at the start of the test.

The test lasted for 7 days and the experimental PLs were fed twice a day with commercial shrimp flakes. No water was changed throughout the test period. Water temperature, dissolved oxygen (DO) and pH were recorded daily. The number of dead shrimp was recorded, and the survival rates were calculated at the end of the test.

For detailed information on the experimental design; preparation of the bacterial strains; enumeration numeration of BALOs, total cultivable bacterial and vibrios counts; high-throughput sequencing of selected genes; and data analyses, refer to the original publication.

Throughout the seven-day test period, water in the tanks for all groups were relatively clear with a little feed residue at the bottom of the tanks. Water temperature was maintained at 28 degrees-C ± 0.5 degrees-C. Dissolved oxygen was maintained at 5 ± 0.6 ppm and pH was in the range of 7.5 to 7.9 in all groups.

Results show that PL gut microbiota, both compositionally and functionally, had been significantly affected after the salinity reduction treatment, with the generally recognized as opportunistic pathogens Gammaproteobacteria being the only dominant class at day 1 of the test, with relative abundances of 99.43, 85.61 and 83.28 percent in the BD, SD and CD groups, respectively. At day 7, Gammaproteobacteria was still the only dominant class in the SD and CD groups with relative abundance of 99.77 and 99.87 percent correspondingly, whereas in the BD group, its value dropped to 8.44 percent.

Regarding biodiversity, the Shannon Diversity Index [a measure of the species biodiversity in an ecological community], over the seven-day test period, while the SD group was unchanged (0.98 to 0.93), the CD group decreased to 0.94 from 2.94, and the BD group was raised to 7.14 from 0.93.

Our results show that the current salinity reduction practice used in China does not kill all Vibrios outright in some PLs and could be improved. Evaluating the data and considering that salinity as well as growth stages can significantly impact microbiota compositions, we feel it is reasonable to suggest that, for a healthy and robust gut microbiota of L. vannamei at the early postlarval stage (PL7–15) a Shannon Index of 2.0 or above should be expected; below this value, PL microbiota may not be in a healthy state. This is supported by the better percentage of accumulated weight gain and higher survival rate in the BD group as compared to the SD and CD groups in our study.

Our data clearly showed that addition of BDN-1F2 to the water in the experimental tanks at the start had a major positive impact on PL gut microbiota, both compositionally and functionally, significantly enhancing their biodiversities and strengthening their functionalities.

Regarding health management and disease outbreaks, the traditional strategy of focusing on a specific pathogen seems not quite adequate and may be outdated from an ecological management perspective. As other researchers have suggested, the strategy should be to manage the entire community rather than just aiming at Vibrios. Others have proposed a holistic approach, and De Schryver and Vadstein (doi: 10.1038/ismej.2014.84) also hypothesized that “manipulation of the biodiversity of the gut microbiota can increase the host’s resistance against pathogenic invasion and infection.” Based on our study results, we believe that BALOs are a group of appropriate organisms to be considered for this approach.

Results of our study show that the gut microbiota of L. vannamei shrimp PLs, both compositionally and functionally, had been significantly affected after being subjected to a water salinity reduction treatment. Addition of a euryhaline strain of BALOs, BDN-1F2, hugely improved its biodiversity and strengthened its functionalities. 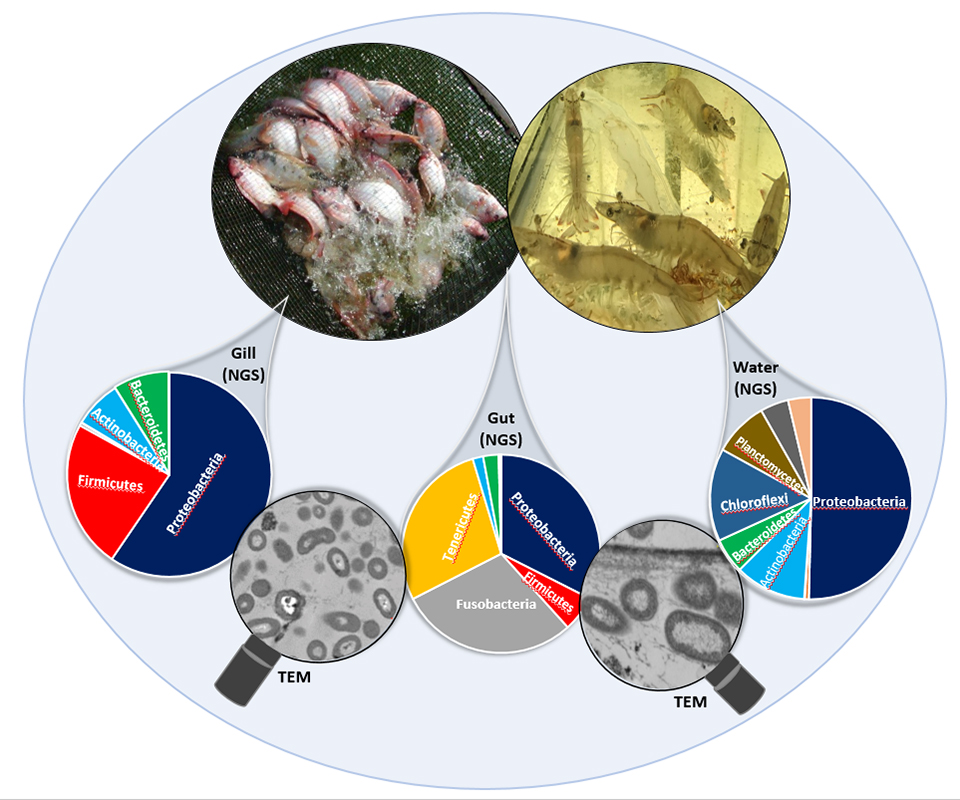 Small is big: Unlocking the hidden potential of microbes for aquaculture

Microbial populations have diverse roles – many still not fully understood – on aquaculture organisms, from the gut to the gills, and a better understanding of this hidden world could unlock a potential that may change the practice of aquaculture altogether.