The Global Aquaculture Alliance’s GOAL 2015 survey of production trends in shrimp farming polled 38 respondents from Asia/Oceania, 31 from Latin America and two from Africa. Figure 1 summarizes the production estimates for global production during 2007-2017, which combine data from the United Nations Food and Agriculture Organization (FAO) and both 2014 and 2015 GOAL (Global Outlook for Aquaculture Leadership) surveys.

Respondents in the 2014 survey reported substantial production declines during 2012-2013 in China, Thailand, Vietnam and Mexico as a consequence of the Early Mortality Syndrome (EMS) disease that originated in China in 2009. Surging shrimp prices in international markets during 2013 were consistent with industry expectations of declining production. Nevertheless, the most recent FAO data show China’s production increasing 9 percent in 2012 and remaining stable in 2013. In the case of Mexico, FAO reported a 20 percent increase in 2013 even though production had contracted by half, according to industry reports. FAO data for Vietnam and Indonesia also seem to underestimate the impact of the global disease. Given these discrepancies, data for China, Vietnam, Indonesia and Mexico for 2012-2013 were obtained from the 2014 GOAL survey; data from 2007 through 2011 correspond to FAO while estimates for 2014-2017 were obtained from the 2015 GOAL survey. Discrepancies between FAO data and industry reports may narrow in the future as national governments and FAO revise their production statistics. 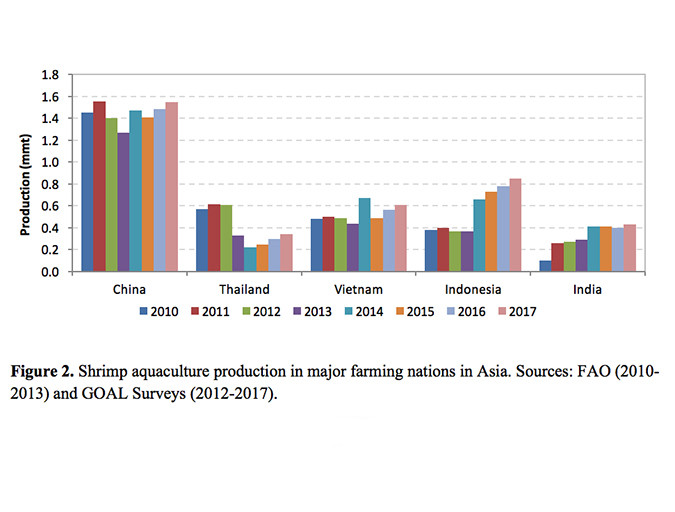 An uneven recovery from EMS is expected in China: While the nadir was apparently reached in 2013 at 1.3 MMT, production was still impacted by diseases and extreme weather events in 2015. Output is expected to reach 1.5 MMT in 2017. On the other hand, Thailand was still reporting falling harvests by 2014, from 611,000 MT in 2011 to 217,000 MT (a 65 percent decline in three years). A partial recovery is expected by 2017. Thailand was for many years the second-most important regional producer, but seems destined now to lag behind China, Indonesia, Vietnam and India.

Most Asian and Latin American respondents expect global economic conditions to either improve or remain stable in 2016; most respondents also expect the global shrimp market to strengthen in 2016. Upward pressure on feed prices is nevertheless expected to continue in 2016.

In conclusion, the industry in Asia seems to be on the path of recovery following the substantial production declines in 2012 and 2013 caused by EMS. Production peaked at 3.6 MMT in 2011 but may reach 4.0 MMT by 2017, driven primarily by substantial growth in Indonesia, which has emerged relatively unscathed from the EMS crisis. Other countries in the region will also grow but their contribution will be more uneven. Of course, these estimates rely on the assumption that no major disease will break out in the region in the next few years.

With notable exceptions such as Costa Rica and Colombia, most countries in the region expect to grow in the near future. The most remarkable growth is predicted for Ecuador, where production will increase from 300,000 MT in 2013 to 370,000 MT in 2017. Ecuador is increasingly targeting European and Asian markets in response to declining exports from Southeast Asia. Brazil is expected to reach 85,000 MT by 2017 while Honduras, Nicaragua and Venezuela should approach 30,000 MT. FAO reported an output of nearly 50,000 mt for Honduras in 2013 but production declined in 2014 due to the impact of droughts. In general, the region is expected to grow 5.5 percent annually from 2013 to 2017.

The GOAL survey also collects information on trends in size categories and product forms. A recent and notable trend in Asia is the increase of green shrimp relative to other product forms such as cooked and breaded. While head-on and head-off green shrimp accounted for only 25 percent of production in the 2008 survey, it accounted for 39 percent in the most recent poll. These changes may signal the growing importance of the domestic Chinese market, which has a preference for green shrimp over other processed forms.

Production in Latin America continues to be oriented towards green shrimp. Head-on shrimp has become the dominant product form. It accounted for an estimated 53 percent of production in 2007 but only 24 percent in 2014. Increased shipments of Ecuadoran shrimp to European and Asian markets are an important factor driving this trend.

Respondents in Asia have reported a move towards production of smaller shrimp sizes (51-60 and smaller) since 2010. The share of small counts increased from 27 percent to 49 percent between 2010 and 2014. The shift to smaller shrimp seems to have been driven by narrowing price margins between the small sizes and the larger counts. Early harvests caused by EMS and other factors also help explain this trend.

“Diseases” was once again identified by survey respondents as the top challenge faced by the industry. Other disease-related issues such as “Seed Stock Quality and Availability” and “Access to Disease-Free Broodstock” were also ranked as major concerns – in the fourth and sixth positions, respectively. Given the recent decline in prices, “International Market Prices” re-emerged as the second most important issue for the industry. “Feed Costs” ranked as the third most important issue.

Perceptions on diseases have changed remarkably over the last eight years. In the 2007 survey, “Diseases” did not make it among the top three challenges for either Asian or Latin American producers, who used to be more concerned about feed costs, market prices and trade barriers. Disease issues have moved to the forefront since the onset of EMS.

Most Asian and Latin American respondents expect global economic conditions to either improve or remain stable in 2016; most respondents also expect the global shrimp market to strengthen in 2016. Upward pressure on feed prices is nevertheless expected to continue in 2016. 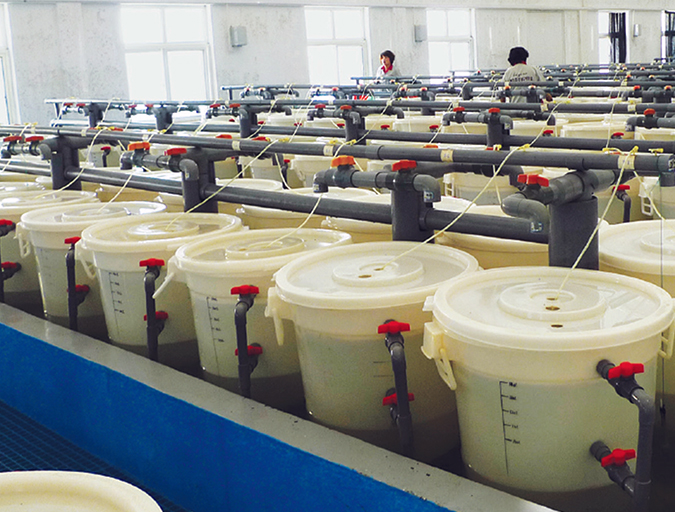 Shrimp farming in China: Lessons from its developmental history

Fenneropenaeus chinensis was the most important farmed shrimp species in China until 1995. Lessons learned from its development made China a pioneer, especially in shrimp larval production. Shrimp farmers must enhance their understanding of the interactions of farming activities with their ecosystems.