The rapid increase in global tilapia production is due in part to the introduction of improved strains of Nile tilapia (Oreochromis niloticus). One of the more popular Nile strains is the Genetically Improved Farmed Tilapia (GIFT) strain developed by the WorldFish Center in the Philippines and Malaysia. In a series of studies conducted in varied culture systems, the GIFT strain has exhibited superior production performance in the Philippines, Bangladesh, China, Thailand, and Vietnam.

The red tilapia in Malaysia are hybrid crosses bred to enhance appearance and marketability. The original red tilapia introduced to Malaysia were probably a hybrid of O. niloticus with O. mossambicus. The lack of systematic broodstock management in Malaysia has led to gradual genetic deterioration due to inbreeding and associated depressed growth performance.

Since fish feeds account for 45 to 85 percent of the farm prices of tilapia, there is great interest in understanding the nutrient requirements of high-performing tilapia strains in order to maximize growth.

It is generally known that different tilapia species, hybrids, and strains have different growth performance potentials. However, it is not completely known if the selectively improved strains of tilapia have different nutrient requirements than the nonimproved fish. Are the higher growth rates shown by the improved strains due to increased capacity for feed consumption, greater efficiency in converting nutrients into body mass, or both?

Most of the reported comparative growth studies used feeding regimes where the fish were fed to apparent satiation during the growth trials. The daily feed intake of Nile tilapia was reportedly more than double that of red hybrid tilapia in a trial in Brazil. The better growth performance of the GIFT tilapia might be due to behavioral factors rather than physiological growth potential.

With the recent commercial interest in the farming of tilapia in Malaysia, the authors conducted a feeding trial at the Fish Nutrition Laboratory at Universiti Sains Malaysia to compare the growth performance of the GIFT strain of Nile tilapia with red hybrid tilapia under similar culture conditions. The study investigated the interaction between tilapia genotype and dietary protein levels of 25 and 35 percent on the growth, feed utilization efficiency, and apparent nutrient digestibility in the fish.

The results showed that the most recent generation of GIFT tilapia had a significantly higher growth rate than the red hybrids fed diets of equal or higher dietary protein levels. The average daily weight gain of the GIFT tilapia was 36 to 72 percent higher than that of the red tilapia (Table 1). Growth performance was significantly affected by tilapia genotype and its interaction with diet. Increasing the dietary protein level by 10 percent caused a further 10 percent increase in the final weight of GIFT tilapia but no further increase in the weight of the red tilapia.

The use of a restricted feeding regime in this study eliminated differences in feed intake as a variable affecting growth. The results conclusively showed that the GIFT tilapia were more efficient than red tilapia in converting ingested feed into fish body mass. The feed-conversion ratio of the GIFT tilapia was 15 to 33 percent better, depending on diet, than that observed in the red tilapia. Protein utilization efficiency was also higher in the GIFT tilapia. About 44 and 36 percent of dietary protein from the 25 percent and 35 percent protein diets, respectively, were converted into body mass in the GIFT fish.

If the fish were fed to apparent satiation, the GIFT tilapia would likely have showed even higher growth rates, as it was observed that the daily ration of 4 percent body weight was not the maximum amount of feed the fish could consume. However, for the red tilapia, the amount of feed allocated was close to apparent satiation. Feeding more protein than required would not only unnecessarily increase costs, but reduce water quality due to increased excretion of nitrogenous wastes.

Diet and tilapia genotype generally did not markedly affect the organ body indices. However, the perivisceral fat content of red tilapia fed the 35 percent protein diet was double that of fish fed the 25 percent protein diet, indicating the higher protein level probably exceeded the tilapia’s requirements.

The study showed no significant influence of diet, tilapia genotype, or their interaction on the moisture, lipid, and ash content of GIFT tilapia and red hybrid tilapia. However, crude protein content was significantly higher in the whole bodies of the GIFT tilapia, indicating greater potential for higher protein deposition in this genotype.

The results from this study indicated that significant tilapia genotype and dietary protein interaction justifies the reevaluation of diet formulations for various strains of tilapia. Optimized diet formulations, especially with respect to protein, should allow high-performing strains such as the GIFT tilapia to realize their genetically predetermined growth potential in commercial production. Similarly, lower-performing tilapia genotypes should not be fed higher-protein diets because they do not result in further growth. 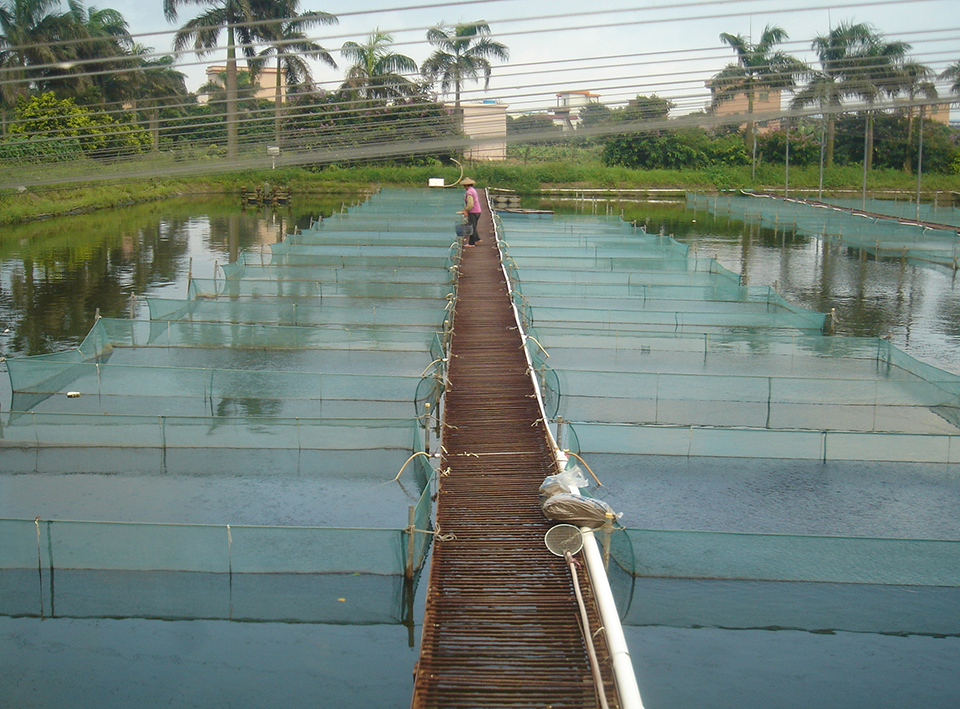 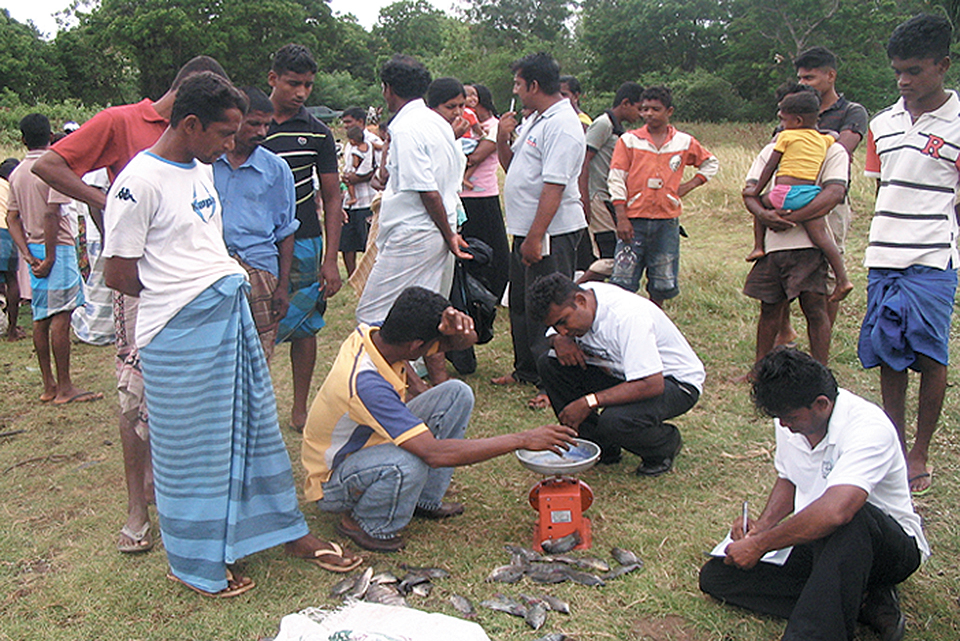 The wide distribution and ongoing improvement of GIFT tilapia in Sri Lanka is raising living standards and employment for women in rural areas. 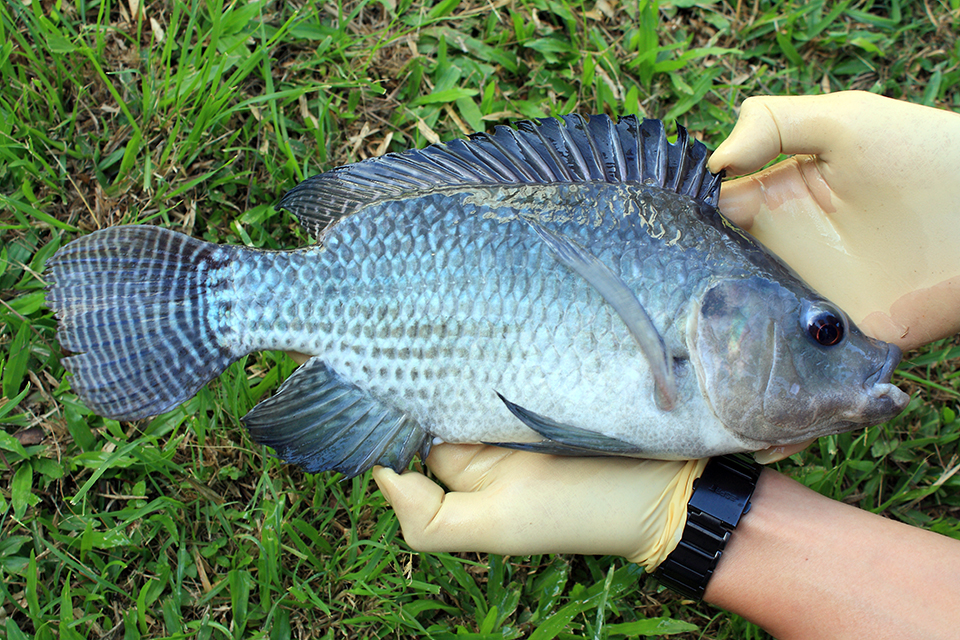