Broodstock ponds are little affected by the Vibrio penaeicida bacteria

In New Caledonia, shrimp culture based solely on the Pacific blue shrimp (Litopenaeus stylirostris) represents the second most important export sector for the country. It has a strong social impact, as it generates both regular and seasonal employment in rural areas.

Caused by the bacteria Vibrio penaeicida, Syndrome 93 is triggered by temperature drops during the passage of cold fronts in winter. Its impact is related to density, and grow-out ponds are more affected than broodstock ponds where the rearing density is traditionally very low. To deal with Syndrome 93, most farmers now produce only during the warm season, which limits industry profitability as processing plants deal with seasonal peaks of production.

Shrimp production in New Caledonia is based on closed-cycle broodstock that were successfully domesticated and produced for more than 30 generations despite several bottlenecks. The control of reproduction was not fully mastered at the time when this exotic species was introduced to New Caledonia as a candidate for aquaculture in the 1970s.

The fact that broodstock ponds are little affected by Syndrome 93 may explain that no genetic improvement for survival has risen spontaneously. Therefore, Ifremer, whose shrimp research team is now based at Laboratoire Aquacole de Calédonie at the Bay of Saint Vincent in New Caledonia, is developing a two-way strategy to find a genetic solution to Syndrome 93.

The first approach aims at improving the ability of the New Caledonian shrimp stock to respond to new selection pressure. Indeed, microsatellite markers have demonstrated that 90 percent of the allelic diversity available in the wild has been lost in the New Caledonian stock during domestication, which should limit the response to any selective pressure on the present stock.

Inbreeding and genetic diversity have often been studied in aquaculture stocks, but limited data is available on strategies to reintroduce diversity in a given aquaculture stock. Most aquaculture industries are based either on an indigenous species or feral stocks of introduced species (cupped oysters, salmonids) because the genetic resource is generally directly available and exploitable with a very low zoosanitary risk. In contrast, very few aquaculture industries are based exclusively on broodstock domesticated for generations independently from wild or feral broodstock.

In a more and more difficult global zoosanitary context, two ways of introduction are basically available. One is by introducing animals from the wild, which are more variable than domesticated animals but likely to carry patho-gens and therefore not able to fulfill importation requirements. The other is by introducing domesticated animals with a known sanitary status like the specific pathogen-free (SPF) status awarded to some Hawaiian shrimp lines by the U.S. Department of Agriculture, but which are potentially less variable than wild animals.

The same microsatellite markers used to study the Caledonian stock demonstrated that the L. stylirostris line reared in Hawaii by High Health Aquaculture Inc., the only SPF line of L. stylirostris available, has lost much variability, but the drift that affected the New Caledonian and Hawaiian stocks has not resulted in the loss of the same alleles. In other words, 25 percent of the diversity available in the wild can be restored by mixing the domesticated populations from Hawaii and New Caledonia. Introducing the Hawaiian SPF line in New Caledonia would increase the allelic variability by 150 percent.

This introduction is scheduled for 2004 by shrimp producers, in cooperation with the New Caledonian sanitary authority. The production of a two-way hybrid between the two parental lines, which is a classic breeding strategy in agriculture, will first be tested in a collaboration between the producers and Ifremer before developing a new composite population.

The second concurrent approach developed by Ifremer to combat Syndrome 93 is to start a selective-breeding program using the available stock. Despite the known high loss of variability, some preliminary results obtained by Ifremer on selection for growth rate demonstrated that some variability was still selectable among Tahitian stock, which are closely related to the New Caledonian animals. The data suggested an assessment of the heritability of survival to V. penaeicida in the available stock, without waiting for the introduction of variability to be completed.

For three generations, an experimental line was developed by mating animals that survived Syndrome 93 episodes during the first six months of their lives in commercial-type grow-out ponds. Shrimp were initially stocked at densities of 20 to 25 postlarvae per square meter. At each generation, the selected animals were then reared at densities of 1 to 2 shrimp per square meter, to be reproduced upon reaching 12 months. A non-selected control line was maintained in parallel by mating animals reared in unaffected “traditional” broodstock ponds with initial densities of 2 postlarvae per square meter.

In both lines, inbreeding was managed by the use of tags which avoided mating close relatives. In order to assess the realized genetic improvement, the third generations of both lines were pregrown separately up to 1 gram, tagged by injection of a colored elastomer, and then mixed in common earthen commercial-type grow-out ponds.

Intermediate and final mortality were checked in each tank 90 hours after injection. The results are summarized in Fig. 1. Survival was significantly higher for the selected line at the three infection concentrations. On average, survival rates of the infected nonselected and selected animals were 70 percent and 84 percent, respectively, showing a significant improvement of 20 percent in the number of surviving animals (P < 0.01).

In late 2003, the fourth generations of the control and selected lines were produced to confirm these results and compare the lines from physiological and immunological points of view. The methodology of selection could then be transferred to the producers and developed on the Hawaiian stock when it is introduced. 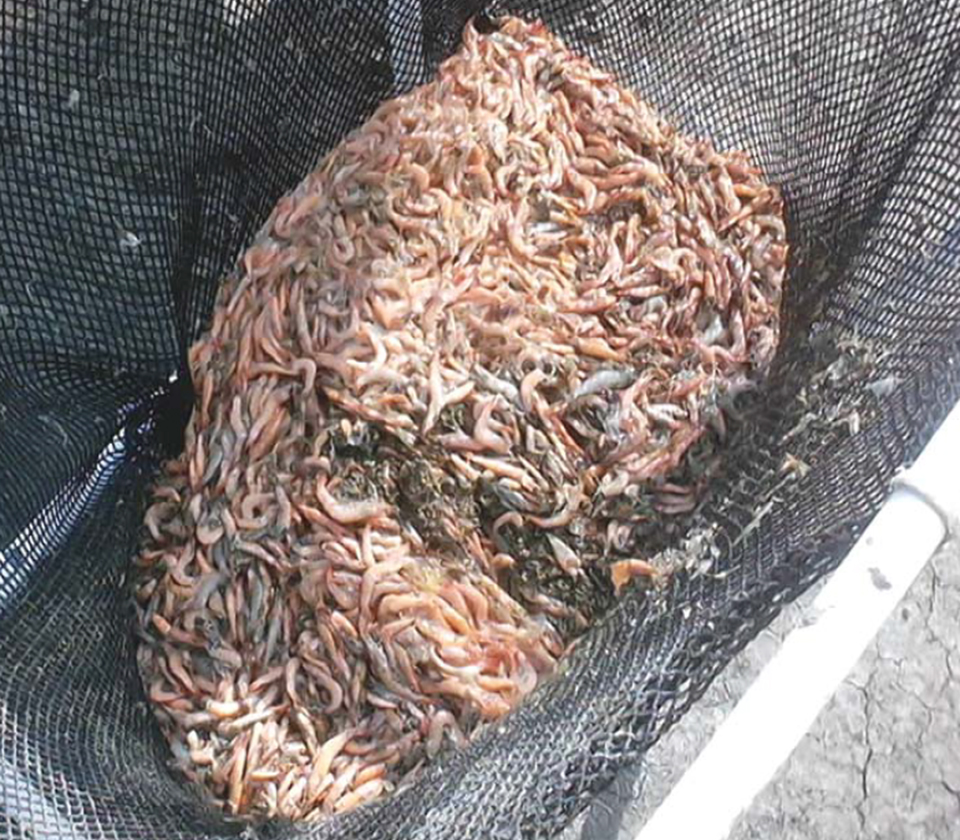 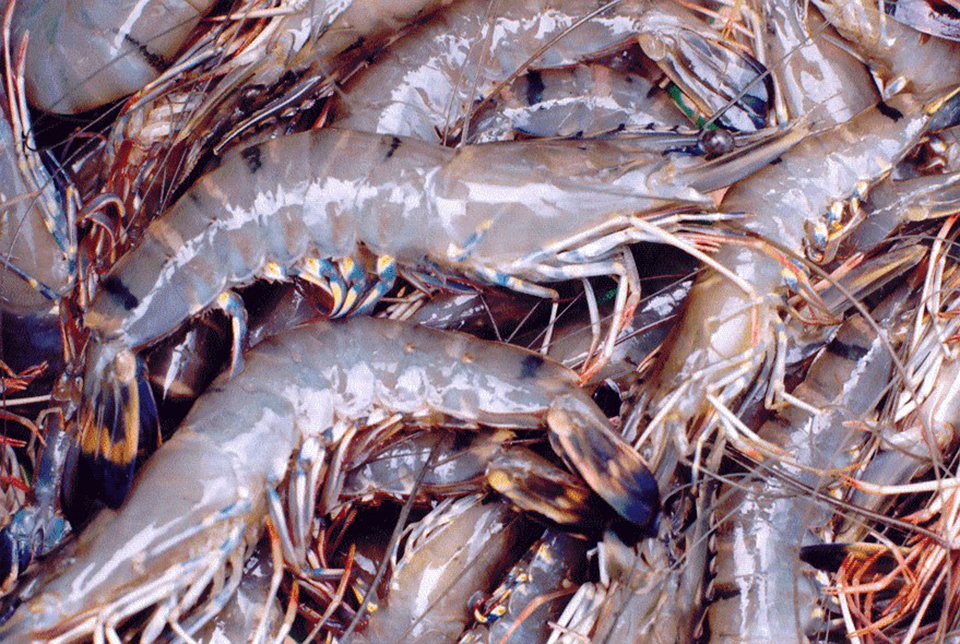