Nutrients in feed not converted completely to fish or shrimp flesh

Feed is the most important and costly ingredient in most types of pond aquaculture. Feeding allows much greater production of fish and shrimp than possible from natural food webs within pond ecosystems. However, the nutrients in feed are not converted completely to fish or shrimp flesh.

Uneaten feed, feces, and metabolic wastes pollute pond water and cause its quality to deteriorate. The capacity of ponds to assimilate wastes can be increased by mechanical aeration, but there is a limit to the amount of feed that can be used efficiently in ponds. Exceeding this limit impairs water quality, stresses culture animals, increases mortality, and lessens feed-conversion efficiency.

Absorbed nutrients are used in metabolism and, to a lesser degree, growth. Water, carbon dioxide, ammonia, phosphate, and other basic compounds are excreted as metabolic wastes. A relatively small amount of the nutrients in the original feed input remains in the harvested animals.

In fish culture, the percentages of feed carbon and nitrogen in harvested fish are similar to those calculated for shrimp in the above example. However, contrary to shrimp, fish have bones made of calcium phosphate and thus contain more phosphorus than shrimp. The percentage of feed phosphorus removed in fish at harvest is typically 25 to 35 percent.

Wastes from feeding have a tremendous influence on pond water quality. Microorganisms decompose organic matter in uneaten feed and feces easily. However, the decay process removes dissolved oxygen from the water and releases carbon dioxide, ammonia, phosphate, and other mineral nutrients. The culture species also consumes dissolved oxygen and excretes minerals similar to those generated by decomposition.

Ammonia and phosphate stimulate the growth of planktonic and benthic algae. These organisms produce dissolved oxygen through photosynthesis in daytime, but consume oxygen continuously. Algae have a life span of a few days, so they die continually and contribute organic matter to ponds.

Algal abundance in ponds increases as feed inputs increase. Ponds with dense blooms of planktonic algae typically have high dissolved-oxygen concentrations during the day, but at night, lower dissolved oxygen (Fig. 1) can stress or kill the culture species.

When feeding rates exceed 30 to 40 kilograms per hectare per day, dissolved-oxygen concentrations often fall to less than 3 or 4 milligrams per liter at night. Low dissolved oxygen stresses most culture species, so at high feeding rates, mechanical aeration is necessary. Dissolved-oxygen levels should be monitored, even in ponds with mechanical aeration, to avoid excessive feed input.

Water exchange sometimes is used to flush plankton and nutrients from ponds and improve water quality. However, this practice can lead to water quality deterioration in receiving water bodies.

Ammonia can increase to toxic concentration in ponds with high feeding rates. Moreover, if the sediment in ponds becomes highly enriched with organic matter, it can become anaerobic. Nitrite and hydrogen sulfide originating in anaerobic sediment also can be toxic to aquatic animals.

Ponds have a large capacity to assimilate the wastes that result from feeding. As stated above, bacteria mineralize organic matter to carbon dioxide, ammonia, and phosphate.

Ammonia is lost to the atmosphere by diffusion. It also is oxidized to nontoxic nitrate by nitrifying bacteria. Nitrate can be denitrified to nitrogen gas, which diffuses into the air.

Carbon dioxide is converted to organic carbon by photosynthesis or diffuses from pond water to the atmosphere. Bacteria can transform carbon dioxide in sediment to methane, which also diffuses to the atmosphere. Sediment usually has a large capacity to fix phosphorus in insoluble iron, aluminum, and calcium phosphates. Some of the organic matter in ponds resists microbial decay and accumulates in sediment as stable organic matter.

The “budgets” for nitrogen and phosphorus in experimental channel catfish ponds at Auburn University in Alabama, USA, are provided in Table 1. However, ponds may receive greater inputs of nutrients in feed than can be assimilated quickly, and water quality deteriorates. When this happens, the culture species can be adversely affected, and feed-conversion efficiency declines.

By doing this each time a pond is drained, relatively low organic matter concentrations can be maintained in pond bottoms, as illustrated in Fig. 2, which provides figures for ponds at the Auburn University Fisheries Research Unit. Of course, pond bottoms can eventually become saturated with phosphorus, which can lead to greater phosphorus concentrations in the water and denser blooms of algae.

Feed inputs to ponds should not exceed the capacity of the ponds to assimilate the resulting wastes. The most reliable way of determining how well a pond is assimilating wastes is to monitor early-morning dissolved-oxygen concentrations. Feeding and mechanical aeration rates should be adjusted to maintain levels above 3 to 4 milligrams per liter in the early morning, when the lowest dissolved-oxygen concentrations occur.

Table 1. Nitrogen and phosphorus budgets of a catfish pond. 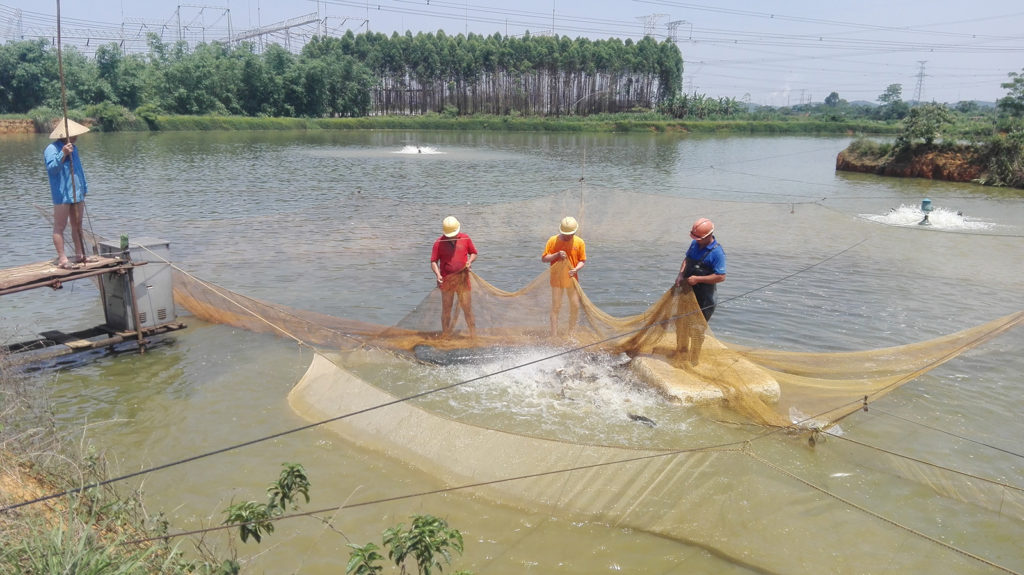