In aquatic species, intestinal bacteria are dependent on the external environment and are transient in nature, due to continuous uptake of water, food and associated microorganisms. Probiotics have been shown to change the intestinal microbiota by competing with pathogens for nutrients. Addition of probiotics to feed may therefore contribute to overall health, resulting in increased production.

In another study, a combination of this probiotic and AquaStar® Pond resulted in improved survival and FCR in an indoor biofloc-dominated shrimp production system, however the culture medium was contaminated with pathogenic Vibrio. The current trial was initiated to determine the impact of three levels of AquaStar® Growout probiotic (2, 3 or 5 g/kg feed) on shrimp performance in an intensive indoor biofloc-dominated shrimp tank system.

Sixteen liters of biofloc from the FAU-HBOI Integrated Multi-Trophic Aquaculture (IMTA) ex-situ bioreactor were added to each tank three weeks prior to shrimp addition. One hundred 1.5-gram shrimp were placed into each tank on May 2, 2017. AquaStar® Growout was top dressed onto Zeigler shrimp HI-35 feed (2 mm pellets) at 0, 2, 3 or 5 g/kg (0 percent, 0.2 percent, 0.3 percent, or 0.5 percent).

The powdered probiotic was added to distilled water at a 1:20 dilution rate as per label instructions and dried overnight at 65 degrees-C. Shrimp were initially fed twice a day by hand (weeks one and two), after which feed was fed continuously using belt feeders based on body weight.

At experimental termination water was additionally plated on marine agar (MA) to determine total bacterial counts and on MacConkey agar (MAC) plate to determine enteric bacteria counts. At harvest the intestinal tract from five shrimp from each tank were collected, pooled, macerated and plated onto TCBS, MA and MAC plates.

Vibrio water column counts began to increase in week four and peaks were noted at weeks 7 and 12. There was a trend towards lower pathogenic (green) Vibrio counts as the amount of probiotic was increased; on average pathogenic Vibrio made up 17 percent of the total Vibrio count in the control, 13 percent in the 0.2 percent and 0.3 percent treatment groups, and 8.5 percent in the 0.5 percent treatment group (Fig. 2). Water samples collected at harvest showed no difference between treatments in total bacterial (MA) or Vibrio counts, however the amount of bacterial growth on MacConkey agar was on average 10x lower (p=0.045) (Fig. 3A).

There was no difference in mean bacterial counts from shrimp intestines collected at harvest (Fig. 3B). However, the composition of both Vibrio and enteric bacteria was altered by the probiotic. Shrimp in the control treatment had a higher percentage of pathogenic Vibrio, despite that the percent of pathogenic Vibrio in the water was less (Fig. 4A). Shrimp in probiotic treatments had a lower percentage of beige (non-lactose fermenting) colonies compared to red (lactose fermenting) colonies; no beige colonies were detected in any water samples (Fig. 4B).

Although no significant differences were seen in terms of increased production, bacterial composition differences were noted in both the water and the shrimp intestines. The preponderance of evidence suggests that incorporating this probiotic product, particularly at 0.5 percent, has the potential to positively impact shrimp health and production by increasing survival and thus reducing FCR. 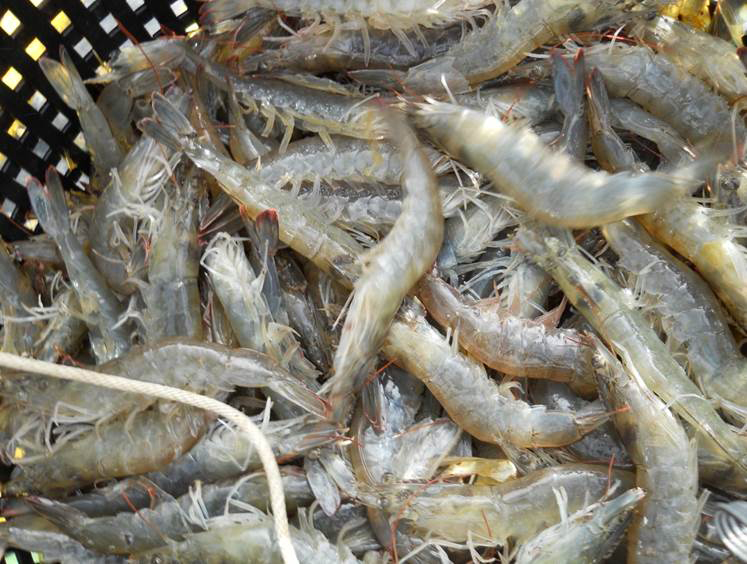