Various bacterial diseases have been causing severe economic losses to the shrimp farming industries in Asia and Latin American for several years. These bacterial diseases include white feces disease (WFD), which together with acute hepatopancreatic necrosis disease (AHPND), reportedly are considered the most infectious and lethal ones. WFD has been occurring in Asian shrimp aquaculture since 2009 and seriously impacted shrimp survival in ponds, and its events are characterized by the presence of white fecal strings which float in the rearing water. They usually occur after approximately 50 days of culture, resulting in retarded shrimp growth, unprofitable harvests and even mass mortality.

Changes in the affected shrimp hepatopancreas and midgut associated with WFD indicate a pathological process in the animal’s gut. The microsporidian Enterocytozoon hepatopenaei (EHP), bodies resembling protozoan gregarines and certain culturable Vibrio species have been reported as potential causative agents of WFD. And deteriorated water quality with oxygen concentrations below 3.0 mg per liter and alkalinity below 80 ppm have been reported as involved in causing peak mortality rates during WFD outbreaks. However, the origin of WFD in shrimp ponds remains inconclusive.

The composition of intestinal bacteria has a strong influence on shrimp health. WFD can be initiated in healthy shrimp by transplantation of intestinal microbiota of diseased shrimp. Bacterial community composition in shrimp intestines may dynamically change following shrimp development and diets. And the water column and the underlying sediment (shrimp habitat), may affect intestinal bacteria with those of wild shrimp differing from those of domesticated/cultured shrimp. Yet, there is little information about the interaction between rearing water parameters, intestinal bacteria, fecal string bacteria and bacterial community composition in pond waters before, during and after disease outbreaks.

Therefore, we believe more extensive information of bacterial community dynamics including pathogenic bacteria in pond water and in association with the shrimp at disease and non-disease stages is needed to understand and prevent WFD and to treat diseased shrimp. We further propose that sudden changes of water quality will first affect bacterial communities in pond water (water bacteria/pond water) and subsequently shrimp physiology and their intestinal bacteria.

The shrimp ponds evaluated are located in Rembang Regency, Central Java, Indonesia. Water samples were collected from one pond with healthy L. vannamei (P1, which served as control) and three shrimp ponds (P2, P3, and P4) that experienced a WFD event at between 50 to 70 days of their culture cycle. All ponds were lined with high density polyethylene (HDPE) plastic and chlorinated two weeks before shrimp stocking. Initial population densities were 40 (P2) and 90 specific pathogen free, 15-day old postlarvae per cubic meter (P1, P3, and P4), with all postlarvae from the same commercial, local hatchery.

For bacterial community analysis, 10 fresh, white fecal strings were collected from feeding trays of each pond with infected shrimp. Ten healthy shrimp from P1 were collected using the feeding tray and put on ice in the cold storage immediately. These animals were then dissected in the laboratory to collect their full intestines. All samples were immediately preserved and stored at minus-20 degrees-C until DNA extraction and various analyses.

For detailed information on the experimental design, sample collection and sampling sites; bacterial culture and identification; molecular analysis of bacterial communities; detection and quantification of virulence genes; and data analyses, refer to the original publication.

To better understand WFD outbreaks in L. vannamei aquaculture, we measured water quality and analyzed bacterial community dynamics in shrimp culture ponds. Based on the visual estimation of white fecal string numbers in the ponds, we divided the WFD event into two phases: start of disease (early symptoms), represented by P3 and P4, with lower numbers of white FS; and early outbreak represented by P2, with greater numbers of white fecal strings. Because bacterial communities of fresh shrimp feces and that of the full intestines of healthy L. vannamei have been shown to be comparable, we only dissected the intestines of healthy shrimp and analyzed them together with the fresh fecal strings collected from diseased shrimp.

Our results showed that WFD occurred when pH changed from 7.71 to 7.84, and the bacterial species Alteromonas, Pseudoalteromonas and Vibrio dominated the aquatic bacterial communities. The disease severity further correlated with increased proportions of Alteromonas, Photobacterium, Pseudoalteromonas and Vibrio in shrimp feces. These opportunistic pathogenic bacteria constituted up to 60 percent and 80 percent of the sequences in samples from the early and advances stages of the disease outbreak, respectively, and exhibited a high degree of co-occurrence.

Microbial activities – including organic matter degradation, respiration and nitrification process and accumulation of dissolved carbon dioxide – will result in a decrease of pH and alkalinity, as was observed in ponds with diseased shrimp. In contrast, external intervention by regular addition of limestone and reactive silicate may buffer pH and alkalinity levels, which we observed in the pond with healthy shrimp.

We observed a gradual shift from presumably beneficial bacteria-dominated to potential pathogen-dominated fecal string bacteria, which coincided with the progression of the disease from the ponds with early symptoms to the pond at early outbreak. This suggests that changes in intestinal bacterial communities may be closely associated with the severity of the shrimp disease. This hypothesis is supported by previous studies, which reported that changes in shrimp intestinal bacteria occurred in parallel with changes in disease severity, reflecting the transition from a healthy to a diseased state.

Among the potential pathogenic taxa, which dominated fecal string bacteria communities in our study, Photobacterium, Pseudoalteromonas and Vibrio corresponded to those previously observed to be associated with the WFD events. However, some genera such as Aeromonas, Candidatus Bacilloplasma, Phascolarctobacterium and Staphylococcus, which were reported to be present in previous studies, were absent in our samples during the WFD event. It is important to consider, though, that geographical location, shrimp farm management, and different methodological approaches may influence the detection of bacterial taxa.

Based on results of our analyzes, we propose that lower pH altered growth rates of heterotrophic bacteria, resulting in a dominance of opportunistic, potentially pathogenic bacteria such as Alteromonas, Pseudoalteromonas and Vibrio in pond water. Since shrimp feces easily disintegrate in the pond water (up to 27 percent within 12 hours) due to water movement and mechanical aeration, we suggest that fecal string bacteria enriched pond water, thereby contributing to the dominance of free-living or particle-associated Alteromonas, as we observed in P2.

Disintegration of feces will facilitate bacterial dispersion, as well as protein and inorganic nutrient enrichment from feces. The enrichment of the pond water by opportunistic pathogenic bacteria further seemed to correlate with disease severity and the number of infected shrimp. This is reflected in the significantly higher concentrations of certain genes in pond water samples from the early outbreak phase compared to the ponds with early symptoms.

Furthermore, if greater numbers of pathogenic bacteria are released in the pond water and incorporated into particulate matter, it will accelerate the spread of the disease among shrimp, since healthy shrimp may consume pathogen-laden particles and become intoxicated. Thus, in this scenario, fecal string bacteria not only contribute to bacterial abundance, structure and function of the rearing water, but also enforce a detrimental feed-back on shrimp health.

In our results, the detection of Vibrio OTUs [operational definition used to classify groups of closely related individuals] in both healthy and infected shrimp and in inversely correlated co-occurrence suggests the presence of different Vibrio strains with contrasting interactions. While some Vibrio OTUs might represent opportunistic pathogens, others may even be beneficial in low proportions. Alternatively, the co-occurrence with other bacteria such as Acinetobacter may prevent the activation of virulence factor genes, despite the presence of potentially pathogenic Vibrio in the intestines of healthy shrimp.

Considering differences of intestinal bacteria communities of healthy shrimp and pond water at non-disease event from those of WFD samples, as well as co-occurrence patterns in healthy and diseased shrimp samples, we highlight that the dysbiosis [a microbial imbalance or maladaptation on or inside the body] in intestinal bacteria and a shift from halophilic bacteria-dominated to pathogenic bacteria-dominated in pond waters contribute to the origin of the studied WFD outbreak.

We emphasize that immediate re-adjustment of water quality parameters – specifically adjusting pH to above 8 – will allow pond water to return to its pre-disturbance composition and terminate the outbreak, followed by recovery from WFD, as indicated by the lack of symptoms and detectable virulence genes in pond water, and no shrimp mortality. This implies a resilience of bacterial communities in shrimp pond water after short disturbances, as can also be observed in other environments. However, we point out that prolonged exposure to water deterioration and elevated pathogen proportions may increase disease severity and lead to mass mortality of cultured shrimp as previously observed.

Our findings on the application of commercial probiotics to cure WFD in shrimp revealed that probiotic bacteria such as Lactobacillus were absent in pond water, intestinal bacteria and fecal string bacteria, suggesting that such an application was not effective. Lactobacillus was no longer detectable after they were diluted in the shrimp pond water. Instead of spreading the probiotics into the pond water, we propose to add them to the feed pellets, which will be eaten by the shrimp. This way, colonization of probiotic bacteria in the shrimp intestine may occur more effectively.

Results of our research showed that environmental stressors – specifically a decrease in pH and dissolved oxygen – induced a substantial bacterial community shift in pond water and affected shrimp physiology, which in turn resulted in changes of the intestinal bacterial community and subsequently the emergence of WFD. Moreover, we observed several opportunistic bacterial taxa – such as Arcobacter, Alteromonas, Marinomonas, Photobacterium and Pseudoalteromonas – which may contribute to or even cause WFD.

To prevent shrimp losses, shrimp farming management should focus on maintaining the quality of pond sediment and water (i.e. pH, dissolved oxygen, turbidity, inorganic nutrients and suspended particulate matter), as well as promoting a stable composition of the intestinal bacterial community, where beneficial bacteria – even in low proportions – are able to inhibit the pathogenicity of Vibrio.

In conclusion, pond water pH was a reliable indicator of the risk of WFD outbreaks; and dissolved oxygen and compositions of water and intestinal bacteria may also serve as indicators for better prevention of WFD events. 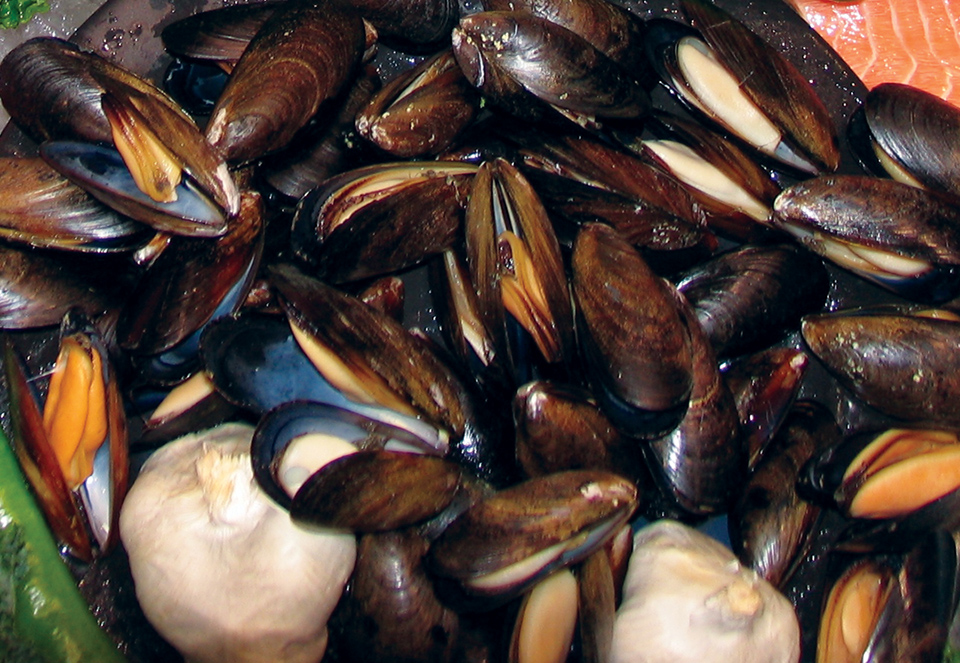 It is important to understand the distribution of pathogenic bacteria in the marine environment to predict potential health concerns transmitted by seafood. 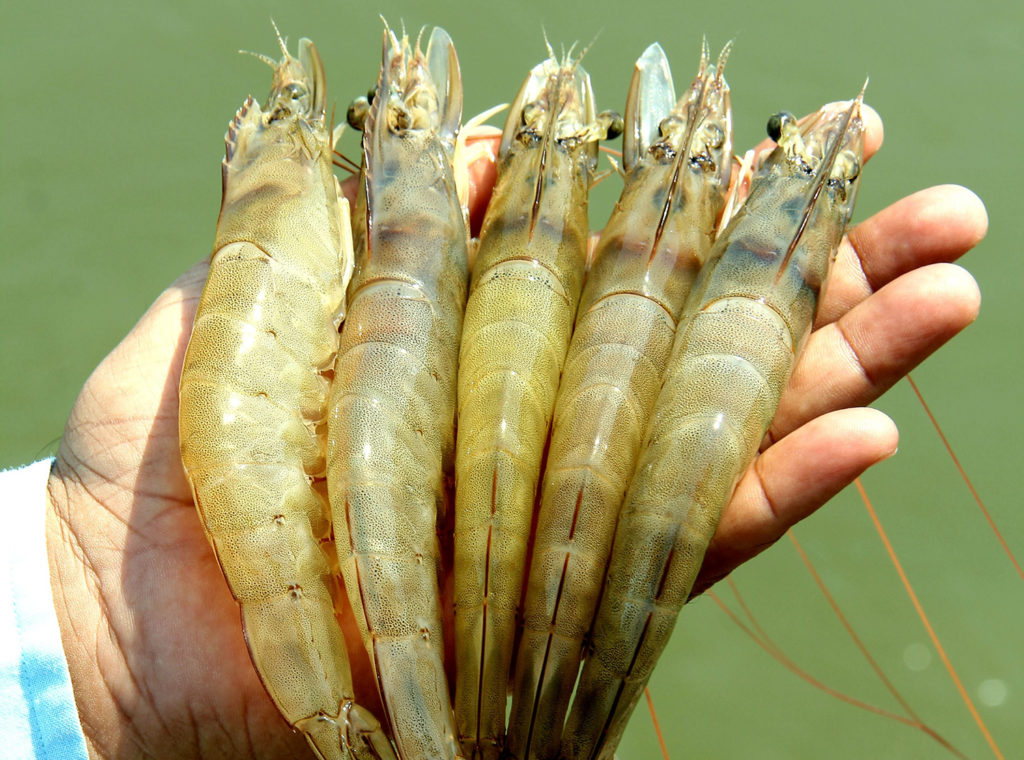