In the human pharmaceutical industry and livestock husbandry, the capacity of 1-monoglyceride molecules is well known in the fight against a broad range of bacteria and viruses. In practice, these molecules are used as antipathogenic compounds in a sustainable substitution for the preventive use of antibiotics. However, in aquaculture, these molecules were not well known until recently.

The catastrophic consequences of the spread of early mortality syndrome/acute hepatopancreatic necrosis disease (EMS/AHPND) in shrimp, caused by a virulent Vibrio bacterium, formed a challenging arena in which 1-monoglycerides entered the aquaculture market. After an extensive research project with different formulations of 1-monoglycerides, the first EMS-free cycle was reached at a shrimp farm with chronic AHPND problems in May 2013 in Thailand.

Although this outcome was promising, much was still unknown, and farmers were asked to participate in additional research trials.

Although multiple pathogens found closely related to AHPND are currently being investigated, the major causative agent is a virulent strain of Vibrio parahaemolyticus. This bacterium has close similarities to V. cholera and V. harveyi, giving researchers a head start in finding possible solutions to protect the shrimp sector against disastrous mortality rates.

Vibrio parahaemolyticus is spread via many different vectors, such as phytoplankton, zooplankton or detrimental pond residues. The chitin exoskeletons of shrimp are also suspected to serve as carriers for Vibrio bacteria. With so many vectors involved, eradication of Vibrios is not possible nor desired, since Vibrios also have beneficial purposes in pond ecosystems alongside other organisms.

Addressing a problem as complex as AHPND requires a comprehensive approach. Although its underlying mechanisms are still in the initial stages of understanding, knowledge is rapidly increasing thanks to close collaboration among stakeholders. The adoption of a holistic approach with a focus on lowering concentrations of infection vectors in shrimp ponds, preventing colony formation inside the culture animals and counteracting the toxin produced by V. parahaemolyticus has been proposed to restore balance and reduce the impacts of AHPND.

One of the proposed methods to prevent AHPND is finding a way to disrupt bacterial attachment to the stomach walls of shrimp before biofilm encapsulation can protect the bacteria against antipathogenic compounds. Feeding 1-monoglycerides is believed to counteract V. parahaemolyticus colony formation by preventing invading bacteria from multiplying. Specific types of monoglycerides are also known for emulsifying characteristics that can increase the permeability of early-stage biofilms. This combination is thought to be the strength of 1-monoglycerides against AHPND progression.

1-monoglycerides are based on a novel technology of esterifying a fatty acid on the alpha position of a glycerol molecule. The result is a new type of molecule with specific characteristics that is neither a fat nor an acid. These molecules are non-corrosive, work independently of pH and are very heat stable thanks to the covalent bonds inside the cores of the molecules. This makes these molecules suitable for feed additive applications.

For many years, 1-monoglycerides have been known for their antibacterial and antiviral effects in the human pharmaceutical industry as well as animal husbandry. They cannot be classified as antibiotics, because the molecules do not literally kill pathogens. The 1-monoglycerides prevent bacteria from taking up energy and water, and therefore basically starve the pathogens to death.

Fundamental research performed by the Research and Development Department of Framelco and the Pharmaceutical Department of the University of Lisbon showed that the homeostasis of bacterial cells is severely affected by 1-monoglycerides through their altering of membrane stability and blocking of the membrane uptake facilitator called aquaporin-3 (Fig. 1).

Treated bacteria are not able to take up sufficient glycerol, a main energy source, and therefore cannot multiply to build up a secure presence in the new host. Since colony formation is inhibited, the bacterial quorum sensing that leads to further biofilm and toxin production is effectively down regulated.

Two types of formulations were tested in Thailand: one containing short-chain 1-monoglycerides and the other containing both short- and middle-chain 1-monoglycerides. Both formulations were tested in dry powder form using a carrier added to the shrimp feed by coating. Five farms were selected – two with chronic AHPND problems, two with occasional outbreaks and one with no AHPND history.

Results from a full growout cycle showed the formulation containing both short- and middle-chain 1-monoglycerides performed better. Mortality was strongly reduced, and early harvesting was not needed. Two subsequent AHPND-free cycles were achieved at a farm with previously chronic AHPND problems. However, shrimp in some ponds still showed poor shell quality, indicating impaired health status likely caused by the presence of a high pathogen load. The pond with no AHPND history showed better growth performance, although not significantly.

Even with this improved formulation, the full prevention of AHPND observed in the original pilot studies could not be consistently achieved in subsequent field trials. On average, mortality reduction of 20 to 30 percent was observed in the field, with only some areas where mortality was prevented completely.

A small-scale challenge trial showed a strong shift from green colonies to yellow colonies in agar cultures of shrimp tissue derived from animals fed 1-monoglycerides via enriched artemia. The water solubility of short-chain 1-monoglycerides and practical difficulties associated with coating this formulation on feed pellets might explain the inconsistent results.

More research was needed to increase the potential strength of the 1-monoglycerides. A large-scale field trial at the Research Institute for Aquaculture in Vietnam found that more consistency could be reached by incorporating the 1-monoglyceride molecules into the feed mash before pellet pressing.

The experiment showed that shrimp treated with dietary 1-monoglycerides performed better than the control groups in growth and general survival. Yet it became clear that negative external factors like changes in climate or water quality could in some cases overshadow the capacity of the molecules.

It was proposed that the 1-monoglycerides inhibited biofilm production and better exposed the harmful bacteria to chemical treatment. The ban on antibiotics in many countries, however, demands an approach without these chemical substances.

In the search for ways to increase the strength of the 1-monoglycerides, a challenge trial was conducted together with the University of Arizona Department of Veterinary Science and Microbiology, led by Dr. Donald Lightner. Experimental diets were composed containing combinations of several 1-monoglycerides and several microingredients. Dry and liquid formulations were also tested. To compensate for the absence of varying external factors, the trial was performed with a high infection rate.

The results were surprising. Due to the high infection rate, all shrimp fed dry 1-monoglyceride formulations died from AHPN within three days. The shrimp fed liquid formulations, however, resisted the challenge and stayed alive (93.3 percent) until the end of the study (experimental day 17, challenge day 7). See Fig. 2.

It was concluded that the fast rate at which feed passes through shrimp does not allow full release of the molecules and therefore reduces their bioavailability. This might explain insufficient results from earlier field trials.

The best-performing liquid formulation reduced mortality with 80 percent compared to that of the positive control group (Figure 3). Shrimp received a 0.8 percent dietary inclusion of liquid 1-monoglycerides once a day. In this treatment group, the few dead shrimp represented a 6.7 percent mortality rate. But after inspection, it turned out these individuals likely died due to cannibalism instead of AHPND.

Histological analyses of sampled shrimp performed at the Aquaculture Pathology Laboratory at the University of Arizona showed infection rates were strongly reduced in shrimp fed liquid 1-monoglycerides. Complete eradication of Vibrio parahaemolyticus was not possible, but the minimal presence of this bacterium in shrimp tissue did not necessarily lead to AHPND development during the trial.

Several field trials are being run to investigate the long-term effects of liquid 1-monoglycerides. Preliminary data show promising results. Most ponds have not shown AHPND outbreaks so far. In ponds at heavily infected farms, AHPND development cannot always be prevented, but has been delayed for weeks. Concluding data from several stocking cycles are expected in the next two months. 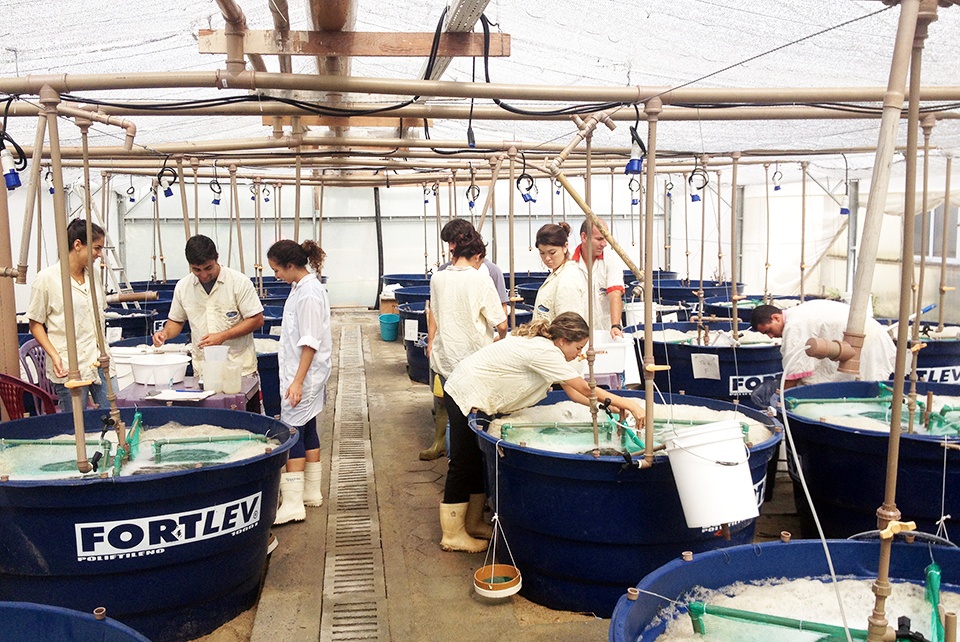 Sodium butyrate has potential as an additive for marine shrimp diets, improving both the balance of intestinal bacterial flora and performance of the shrimp.