Brazil has many native aquatic species with significant potential for aquaculture production. However, most of them are rather largely unexplored scientifically and technologically. The Amazon river prawn (Macrobrachium amazonicum) is the native freshwater prawn species with the greatest potential for production, widely consumed by Amazonian populations and also in parts of the semi-arid region of northeastern Brazil.

The Amazon river prawn has been the most exploited species of freshwater prawn by artisanal fisheries in Brazil, and it has significantly high economic and gastronomic relevance.

Ammonia and nitrite in aquaculture systems

The physiological processes of aquatic organisms, the decomposition of organic matter, and food leftovers are the main sources of nitrogen compounds in aquaculture production systems. Ammonia is a nitrogen compound that occurs naturally in the environment, but it is also the result of industrial pollution and domestic and agricultural runoffs. It is the main product generated by protein catabolism in most aquatic organisms, and likewise originates from the decomposition of undigested food and other organic wastes.

The ammonia non-ionized form is demonstrably toxic and negatively influences growth, feeding, survival and susceptibility to diseases and parasites in prawn and other aquatic organisms. In the water, ammonia can be found in its ionized form (NH4+) or its unionized form (NH3); the sum of the two is the total ammonia. Their proportion in the water depends on pH and temperature.

Nitrite is the intermediate compound in the bacterial nitrification of ammonia to nitrate. It may present high toxicity, depending on its concentration in the environment and organism developmental stage (larvae to adult).

Our research work was conducted at the Prawn Culture Laboratory, located at the Federal University of Paraná. We used 240 prawns of each of three life stages (postlarvae, juveniles and adults) and for each compound tested (ammonia and nitrite), randomly divided into 24 experimental units. The units consisted of a beaker with a volume of 1 liter for postlarvae, and glass aquaria with 10 liters of useful water volume for juveniles and adults. The design was completely randomized, with six different total ammonia concentrations (0, 5, 10, 20, 40 and 80 mg.L-1 of ammonia) and six nitrite concentrations (0, 1, 2, 4, 8, and 16 mg.L-1 of nitrite), with four replicates.

Mortality rates of prawns exposed to ammonia concentrations of 5 and 10 mg.L-1 of total ammonia, for all life stages examined, were all below 10 percent. The control (0 mg.L-1 of total ammonia) for all ontogenetic stage presented mortality below 6 percent. Mortality observed for the different life stages of control M. amazonicum (not exposed to increased ammonia) during the trial period may be related to the agonistic behavior of animals in competition for area (territorialism).

Based on our study results, we determined the safe levels of total ammonia and nitrite to each of three life stages – postlarvae, juveniles and adults – of M. amazonicum, which have important implications for the commercial aquaculture production and providing relevant information for the handling and management of these animals in production systems. Careful monitoring of these variables is critical to prevent losses, mainly during larviculture and in production in recirculation systems. 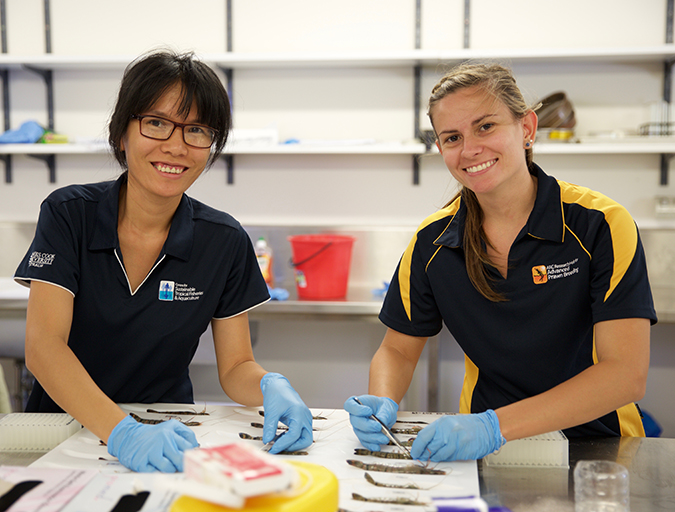