Shrimp farming in Brazil has gone through a series of technological advances, driven mainly by the search for greater shrimp farm productivity. In the early 1980s, pioneer farms adopted a semi-extensive regime, characterized by low stocking density (1 to 3 shrimp per square meter) and organic fertilization for development of benthic food, resulting in yields between 50 and 200 kg/ha/crop. From the mid-1990s onwards, with the availability of Pacific white shrimp (Litopenaeus vannamei) postlarvae and industrially compounded feeds, semi-intensive practices were introduced. These were characterized by greater feed management control through the use of feeding trays and densities of up to 30 shrimp per square meter, resulting in yields close to 1,500 kg/ha/crop. In the late 2000s, farmers implemented more intensive practices, electrical power was brought to farms to allow the use of mechanical aeration and earthen ponds with areas of up to 5 ha began to be used. In 2003, densities could exceed 50 shrimp per square meter, with yields close to 4,000 kg/ha/crop.

Super-intensive farming technologies are currently being implemented in some farms in the Northeast part of Brazil. Unlike intensive earthen ponds, these systems operate to strike a balance between high shrimp productivity, water quality parameters, reduced water exchange and greater biosecurity. Ponds use square or rectangular areas between 2,500 and 4,000 square meters, depths between 1.8 and 3.0 meters, with bottoms lined with high density polyethylene (HDPE) geomembranes and equipped with central drains. There may be basins for water reuse, with greenhouse cover, PVC structure, wood or galvanized metal, covered in semi-transparent or opaque film. Shrimp are fed several times a day by manual broadcasting or using feeding trays, a high mechanical aeration rate (20 to 30 hp/ha) is used, initial stocking densities range from 120 and 300 shrimp per square meter, and yields can reach up to 25,000 kg/ha/crop.

Recent studies on superintensive systems have converged to a hybrid system that combines water recirculation (recirculating aquaculture system, RAS), the presence of microbial flocs and zero water discharge. The basic principle of RAS is the treatment of discharge water through a series of processes, which may include physical and mechanical filtration, biofiltration, and disinfection and oxygenation before returning the treated water to the culture system. This article presents the results of three superintensive trials with L. vannamei juveniles carried out at the LABOMAR research facilities, using experimental circular tanks, operated with minimum water exchange or in a hybrid system with full water reuse. Specifically, the study determined shrimp performance regarding final survival, body weight, feed intake, feed conversion ratio and yield in response to water exchange regime, stocking density and feed used.

The sample design used in this study consisted of 25 cylindrical tanks with a usable volume of 6.37 to 7.96 cubic meters (area of ​​5.31 square meters x 1.20 to 1.50 meters deep) and made galvanized steel structure and PVC tarpaulin. The tanks were kept open, semi-covered with shading screen and milky/opaque film, individually equipped with a separate water inlet and outlet, aeration with one or two porous hoses, automatic feeder and feeding tray for indirect estimate of feed intake (Fig. 1). The culture tanks have two water connection lines, one for the reused water supply and one for wastewater drainage, connected to two buried 5- and 10-cubic-meter reservoirs. These reservoirs reduce and oxidize the organic matter present in the discharge water through denitrification, sedimentation, nitrification and intense oxygenation. The treated water goes to two other 20-cubic-meter reservoirs and is then pumped into the cultivation tanks.

Three consecutive trials (1, 2 and 3) were performed, modifying the commercial feeds used, water preparation, water exchange regime, shrimp stocking densities and feeding methods (Table 1). The preparation of the tanks for the trials began by washing/blasting the tank walls with water and chlorine. Subsequently, the tanks were exposed to sunlight and then rinsed with saltwater to remove debris. On the following day, the tanks were filled with estuarine water, prefiltered with a sand filter. In trial 3, the water was disinfected with 5 ppm calcium hypochlorite.

Prior to shrimp stocking, tank water was fertilized to promote the growth and dominance of heterotrophic and nitrifying bacteria. Water was fertilized by applying to each tank 8.8 grams per cubic meter of ground shrimp feed containing a minimum of 35 percent crude protein along with 10 grams per cubic meter of sugarcane molasses. In trial 3, molasses was used in combination with a fermented preparation consisting of rice residues and live yeast (symbiotic). This procedure was repeated three times a week during the first month of shrimp culture. The fermented material was replaced by sugarcane molasses from the second month of cultivation to maintain the desired brownish color of the culture water, characteristic of the dominance of nitrifying bacteria in the system (Fig. 2).

In trial 3, commercial feeds were delivered mechanically and manually. During the daytime, between 8 a.m. and 4 p.m., feeds were delivered using mechanical feeders and by hand broadcasting at one-hour intervals. At night, feed was distributed mechanically using an automated feeding device programmed to deliver feeds every hour. Day and night rations represented 60 and 40 percent of the total daily meal, respectively. A feeding tray was positioned below each feeder to monitor nighttime feed consumption. During the daytime, the trays were removed from the tanks, the amount of leftovers was visually assessed, and the trays were later washed and replaced in the tanks.

In all the trials, rations were adjusted daily, assuming a 0.5 percent weekly decrease in shrimp survival in all culture tanks. Meals were adjusted weekly, starting on the seventh day of culture. At each sampling session, a total of 20 shrimp per tank was weighed on a precision scale to determine the mean population weight. Until the next weight check, the increase in rations was done daily on the basis of the average daily shrimp growth observed in the previous week, with a weekly survival decrease of 0.5 percent.

Salinity, pH, temperature and dissolved oxygen were determined once daily at 9 a.m. in all tanks. Settleable solids (SS) were measured three times a week using 1,000 mL Imhoff cones (Fig. 3). Alkalinity was determined for correction with sodium bicarbonate (NaHCO3). An application of 20 grams per cubic meter NaHCO3 was performed for each 10 mg/L increase in water alkalinity.

Table 2. Growth performance of L. vannamei juveniles grown under superintensive conditions at different stocking densities and water regimes. Values presented as mean ± standard deviation of 25 tanks. When a statistically significant difference was detected at P <0.05, the mean values are presented as minimum and maximum (-) of five culture tanks. Trials 1, 2 and 3 had initial stocking densities of 186, 282 and 659 shrimp per square meter.

In trial 1, the weekly growth of shrimp ranged from 0.89 ± 0.03 to 1.13 ± 0.19 grams, while in trial 2 the values ​​were lower, between 0.82 ± 0.09 and 1. .00 ± 0.04 grams. Shrimp growth was significantly affected by the type of feed used. Although it can be speculated that the reduction in weekly growth in crops 1 and 2 was due to the increase in initial shrimp density, under 659 shrimp per square meter the growth increased to an average of 1.17 ± 0.14 grams. Most likely the different growth rates observed were a result of the operational characteristics of each crop, in particular feed management and the type of feed used.

A correlation between culture days and all body weights of shrimp collected throughout the trials indicates that under 659 shrimp per square meter, the estimated progression in weight gain is maintained above the other densities (Fig. 5).

The apparent food intake by the shrimp varied between trials 1 and 2, and between the feeds used. These variations were expected, given the differences observed in shrimp body weight throughout the culture period. However, in trial 3 there was a significant decrease in the apparent feed intake. This was due to the greater monitoring of feed intake, a greater restriction imposed on the feeding table and also due to the higher feeding frequency adopted. These procedures permitted reducing the FCR from 1.85 in trials 1 and 2 to 1.63 in trial 3, without any loss in growth performance.

Through the results of this study it was possible to verify that L. vannamei juveniles have adequate survival, growth and feeding efficiency when cultured at high density, using minimal water exchange or full water reuse through recirculation. The increase in initial stocking density from 186 to 282 shrimp per square meter did not have a deleterious effect on the zootechnical performance of the animals. Under these densities and under experimental conditions, L. vannamei achieves a survival greater than 90 percent, weekly growth between 0.8 and 1.1 g and productivity between 2.2 and 3.0 kg per square meter.

The shrimp were also able to withstand even higher stocking densities at 659 shrimp per square meter without compromising their survival and growth. This density provided survival, growth and final yield equivalent to 82 percent, 1.32 grams/week and 6.5 kg per square meter, respectively. At this stocking density, shrimp were cultured in a hybrid system that operated with continuous water recirculation to allow sedimentation and removal of suspended solids. This permitted a stability in the concentration of nitrogenous compounds, and it was not necessary to maintain the system in a heterotrophic regime or with biofloc dominance. 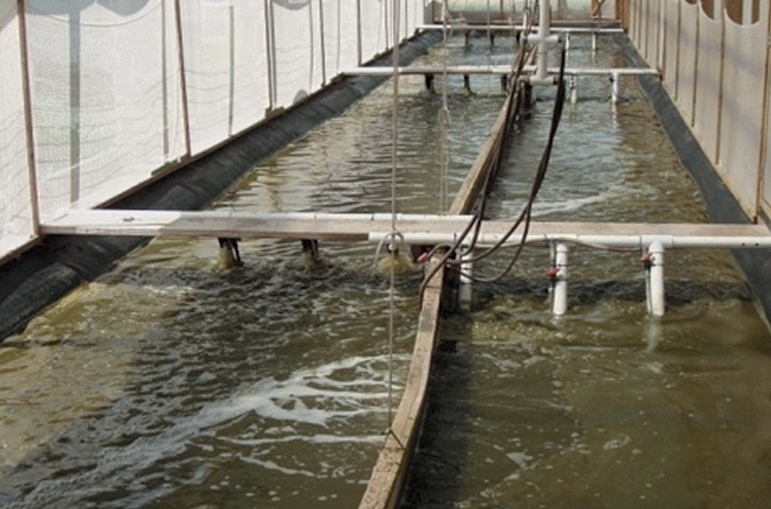 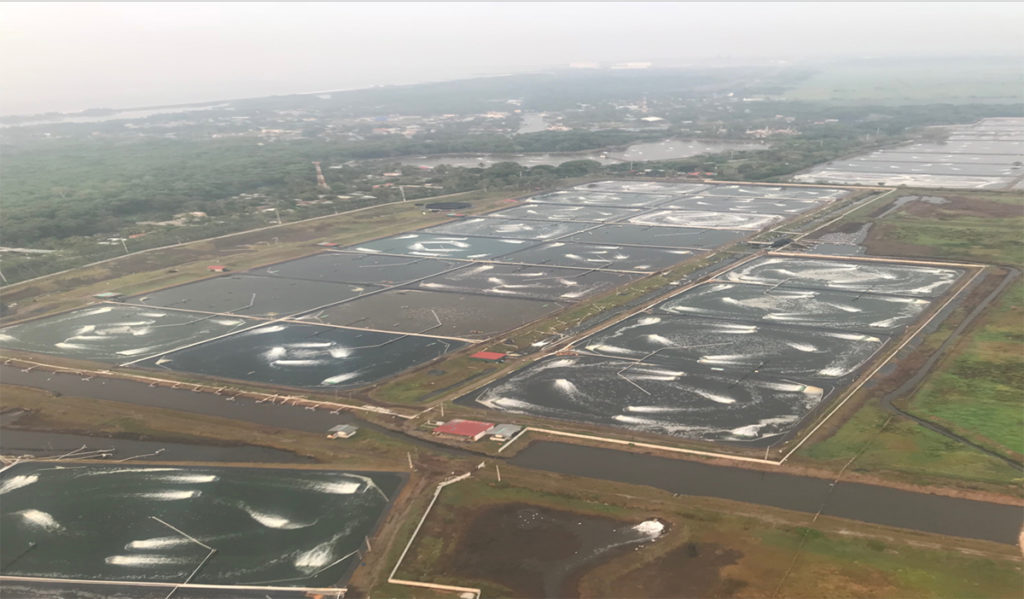 Guatemala’s shrimp-farming growth is due to a highly intensive system of small ponds and shorter cycles. Production of close to 25,000 metric tons is expected in 2018. 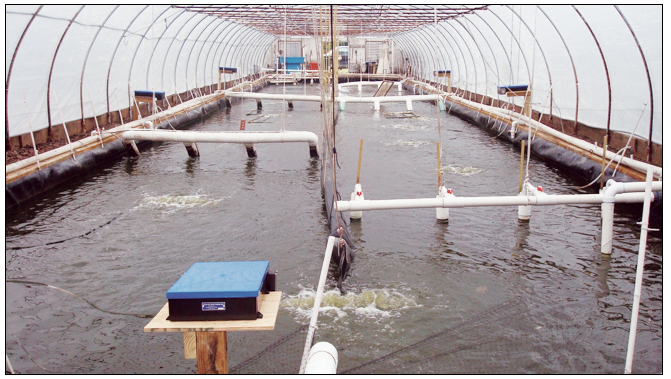