The novel coronavirus (COVID-19) has had an unquestionably dramatic impact on the seafood industry across the globe. In the Pacific Northwest, aquaculture producers large and small have been challenged by this pandemic, and some are faring better than others.

In Canada, the demand for shellfish has fallen precipitously because this sector depends heavily on restaurant demand, explained Tim Kennedy, president and CEO of the Canadian Aquaculture Industry Alliance. But the same is not true of salmon and trout, species that have not seen as steep a decline.

“There’s steady demand for salmon and trout from the retail sector, so I think that’s pretty resilient and I’ve not heard of any job layoffs from those farms,” he said. “Self-isolation has impacted a number of farm sites but it’s not at an extreme place right now and I’m hearing that British Columbia aquaculture workers are going to work, and farms are still operating.”

Shawn Hall, spokesman for the B.C. Salmon Farmers’ Association, said the retail market is brisk and demand for salmon has actually increased.

“The restaurant market has certainly declined but B.C. salmon farmers have adjusted their production for the retail market and we’re working full out to keep Canadians nourished with healthy food at this time,” said Hall.

Staff protection on the farms has become a top priority, he said, adding that hygiene levels have been heightened: “Farm workers are practicing social distancing and have been provided hand sanitizer and gloves; in many companies office staff are working from home, and some companies have extended remote farm shifts to minimize transportation and interaction between employees.”

Non-essential visits to farm sites have been suspended and where necessary, those visits, such as feed delivery, have been coordinated to minimize any contact, exposure or interaction.

The whole family is working without pay, rolling their sleeves up and working daily to map our way through it.

Support from the provincial and federal governments has helped to buoy and support the seafood industry. The B.C. Provincial Government declared the aquaculture and fishing sectors and the businesses that support them to be essential services exempt from the business shutdown. The Federal Government has responded rapidly with financial aid packages such as the CAD $5 billion ($3.5 billion, €3.2 billion) Farm Credit Canada loan program, accessible to aquaculture companies and seafood processors, and the Canada Emergency Response Benefit, which provides CAD $2,000 ($1,400, €1,300) per month for up to four months to workers who lose their income as a result of the pandemic.

“It’s a symbolic thing for our workers to know that in Canada they’re seen as part of that essential workforce,” Kennedy said. “As the government continues to prioritize the workforce and supplies, we will remain part of that priority sector.”

“We’re producing larvae but our oyster farmers either don’t have the money to buy it, or they’re holding off,” he said. “Many have had to lay people off because they can’t carry the cost of their staff right now, with the result being, they don’t have crews to handle the seed.”

Whiskey Creek has a small labor force and doesn’t require many staff to remain operational right now. But Wiegardt said if they cannot sell the oyster eye larvae they will have to dump it.

“We have facilities to raise some clams and oyster seed but we’re not big enough to absorb what we produce,” he said. “We’ve even told customers to take the seed now and pay us later, but they’re reluctant to do that right now. Maybe later in April they’ll be willing to.”

Business sales are 10 percent of what they would ordinarily be this time of year and Wiegardt said Whiskey Creek is hanging in there, but will have to scale back. “People have to have seed for their future crops but they’re very careful as to how they’re spending money right now. As long as you don’t have restaurants and seafood markets open, everything is off.”

At Shelton, Wash.-based Taylor Shellfish, Bill Dewey, head of public affairs, said sales are a quarter of what they would normally be this time of year and the company has cut back every way it possibly can.

“We still have crews doing some harvesting, but there’s a lot of harvesting that’s not happening right now,” he said. Taylor has laid off 46 staff and placed 240 on standby for up to eight weeks. Another 188 are on a shared work program with reduced hours.

Some of Taylor’s farms, like the geoduck culture, have been shut down for now and hatchery and nursery operations are working with reduced staffing.

“We’re doing no more maintenance than what we absolutely have to right now,” Dewey said. “Some of our oysters must be harvested in a certain size range, and as they grow bigger, they’ll be too big for the market demand. Also, if our mussels get too big, they will drop off and we’ll lose them. So, there’s consequences to just shutting down the farms, but hopefully for the most part we’re not losing product.”

The biggest issue, he said, is delayed revenue and lost market opportunity: “In Asia people are starting to eat out again as things come back to life, but we’re struggling to find cargo space to take advantage of this. In Washington state the governor has extended his stay-at-home order, but since we’re essential workers this order doesn’t apply to our staff. Still, it effects the market, because as long as it’s in place people aren’t going out to eat, so there’s no market.”

“Just to keep going each week and maintain our operations takes a lot of money, and it’s hard,” he said. “We’re looking at programs for federal assistance and we have some assets we’re looking at selling to get us through this.”

“We’re a multi-generation-owned family business doing this since 1890 and the Taylor family has suffered through a lot of adversity and issues over the years,” he continued. “They’re determined to get through it and the whole family is working without pay, rolling their sleeves up and working daily to map our way through it.”

Dewey added that company executives are confident “things will bounce back” but realize it won’t be a quick process. “People will go back to eating shellfish in restaurants, but right now it’s hard to predict how soon things will rebound once we come out the other side of this.” 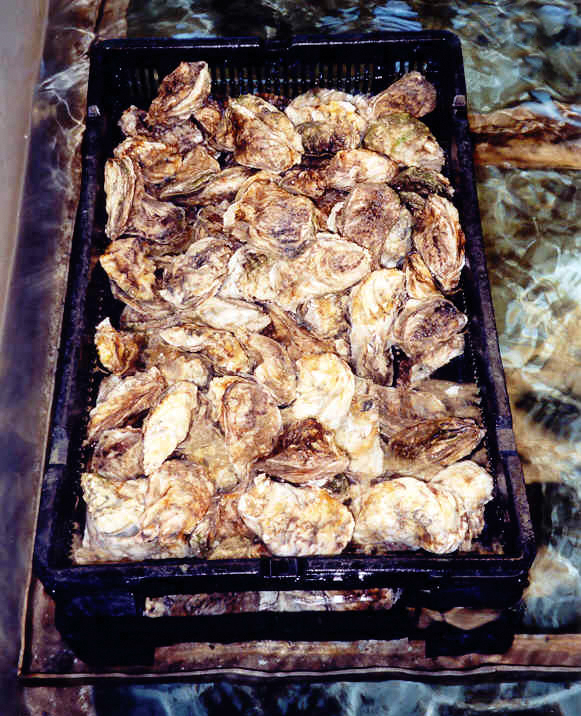 Cryptosporidium parvum, an emerging waterborne path­o­gen, is frequently isolated in shellfish and can cause diarrhea, fever, nausea, weakness and abdominal cramping.