A total of 3,000 paddlefish (Polyodon spathula) larvae were first introduced to China from the United States in 1988. Due to the low survival rate of larvae during transportation, China turned to the importation of fertilized paddlefish eggs in 1991, which has continued until the present. Successful spawning of broodfish raised in China was achieved in Hubei Province in 2001, and now paddlefish are cultured in more than 10 provinces in China.

The feeding habit of paddlefish is rather similar to that of bighead carp, which is one of the major traditional fish species produced by Chinese aquaculture. Therefore, Chinese fish farmers tried to rear paddlefish as a substitute species for bighead in their production systems. However, it proved difficult to raise paddlefish in the intensive carp production pond systems of carp because paddlefish have relatively high requirements for dissolved oxygen.

The four paddlefish hatcheries in China are located mostly in Hubei Province. Together they can supply about 600,000 fingerlings/year. The limited supply and high price of fingerlings are still the major factors limiting the expansion of paddlefish production in China.

During paddlefish seed production, the zooplankton Daphnia are very important for fingerling culture. In hatcheries, some ponds are usually fertilized and used for the Daphnia supply, which is harvested daily to feed the fingerlings, avoiding problems of cannibalism.

In general, fingerlings are reared in rectangular concrete tanks of 8-square-meter size, but bigger tanks including the round tanks used for broodfish during spawning also could be used. Once their body length reaches 5 mm, fingerlings are trained to eat formulated feeds.

At 10 cm length, paddlefish fingerlings are cultured to market sizes in ponds or cages in reservoirs. Because of the limited supply of fingerlings and the lack of equipment to catch paddlefish from large bodies of water, reservoir ranching as a production system has not been well developed in China.

In reservoirs with net cages reflecting typical dimensions of 4 x 5 x 2.5 meters, the stocking rates are 15 to 40 fish per square meter when prepared diets are fed. The stocking rates are reduced to 3 to 5 fish per square meter if the fish do not receive prepared diets. Lighting is provided to attract zooplankton to the cages as the natural diet for the paddlefish (Table 1).

Paddlefish are also raised extensively in water supply reservoirs to help maintain water quality because they filter feed on zooplankton.

There is still not a specific diet designed for paddlefish. Currently, extruded feeds formulated for snakehead fish or frogs, with a protein level of 39 to 44 percent, are used for paddlefish culture.

Meat quality is significantly different between paddlefish reared in ponds and those produced in reservoir cages. Therefore, a new method is being developed to take advantage of both rearing systems. The fish are first reared in ponds with formulated feeds and then transferred to reservoir cages to feed on zooplankton only, supposedly resulting in improved meat quality.

Recently, Chinese restaurants have developed new dishes that require paddlefish weighing as much as 3 kg. One fish could be prepared for different dishes with individual parts of the body, including the gills and even the intestines.

Paddlefish are usually marketed live, since the processing industry has not yet been developed. A few paddlefish are also marketed as aquarium fish due to their unique feeding behavior, feeding on prepared diets floating on the water surface. 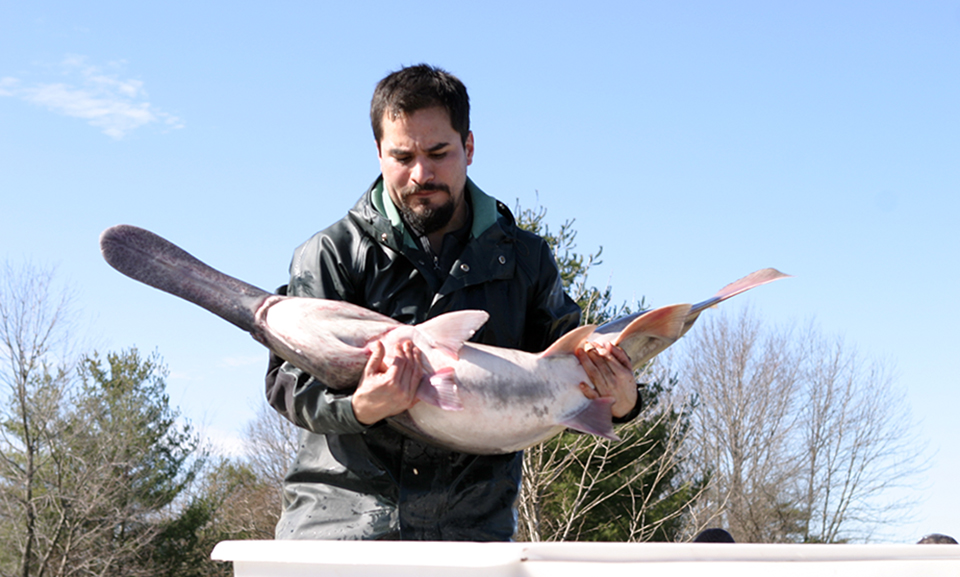 A pilot project in Kentucky that uses wastewater effluent and decommissioned tanks at a water treatment plant has cultured over 70,000 phase II paddlefish.