Since 2009, outbreaks of motile Aeromonas septicemia (MAS) in West Alabama and East Mississippi have cost U.S. catfish aquaculture an estimated $60-70 million due to mortality, lost feeding days and costs associated with chemical and antibiotic therapy. Emerging virulent Aeromonas hydrophila (vAh) was demonstrated to be responsible for the MAS outbreaks (Figure 1). To date, primary or obvious field conditions leading to the disease outbreaks are largely unknown and suggested management practices have failed at limiting or preventing the outbreaks.

Induction of MAS in laboratory trials can assist in evaluating virulence of field isolates of A. hydrophila, assessing predisposing factors and developing prevention methods against MAS. Currently, intraperitoneal (IP) injection (i.e. delivering bacterial cells into fish intraperitoneal cavity by syringe and needle) is the method used in laboratories to compare relative virulence of A. hydrophila isolates and to examine the effect of vaccination on prevention of MAS. Challenge via IP injection is effective and reproducible, but bypasses the fish’s innate defenses (i.e., skin and mucus). Another challenge method is immersion of fish in water containing vAh cells. This practice, referred to as waterborne or immersion challenge, is more natural, mimicking infection under aquatic conditions. To date, mortality via this method was low even at very high concentrations of vAh bacteria. Factors leading to MAS have not yet been determined with the waterborne challenge method. Here we report results of a published study that investigated potential factors that lead to an increased susceptibility of catfish to vAh infection under laboratory conditions and the establishment of a reproducible waterborne challenge method that mimics natural occurrence of MAS.

Three virulent isolates of A. hydrophila (ML-10-51K, AL09-71= ML09-119 and ML-10-208K) obtained from diseased catfish with typical signs of MAS were used in this study. The bacteria were cultured in tryptic soy broth at 28ºC with constant shaking at 200 rpm until the cell density reached to approximately 2 x 109 cells/mL. For pathogen challenges conducted in this study, bacterial cells were propagated in TSB using the same batch of stock culture at an inoculation rate of 100 µL of stock culture per each 100 mL of medium.

Effect of wounding of fish on mortality

The following treatments were conducted to assess effect of netting and wounding of fish on mortality: 1) Light transfer and holding: Fish were transferred from the stock tank to the 50-L experimental tank (10 fish/tank) using an 8-inch (20-cm) net. Forty-eight hours post transfer, water flow was turned off and the tank water level was reduced to 15-L. Fish were challenged with vAh at concentration of 2.0±0.06 x 107 cfu/mL of tank water. One-hour post challenge, water flow was resumed. There were 6 replicates for A. hydrophila challenge and 3 for mock challenge (by adding 100 mL of uncultured TSB); 2) Skin abrasion: Fish were lightly transferred in the same way as described in Treatment 1 to a bucket filled with about 20-L of tank water containing 100 mg/L of tricaine methanesulfonate (MS-222). Individual immobilized fish were lightly abraded on one side of the tail (crossing about 2.0 – 2.5 cm) using a 4-ct Scour Pad.

Ten abraded fish were put into a 50-liter tank filled with 15 liters of water. There were six replicate tanks, three of which were subjected to challenge with vAh and the other three were mock challenged for 1 hour; 3) Clipping of adipose fin: Fish were transferred to and anesthetized in a bucket as described in Treatment 2. The adipose fin, located medially between the dorsal and caudal fin, was individually clipped with a pair of scissors (about 80-85 percent of the fin was removed). A total of 80 adipose fin (Af) clipped fish was equally dispensed into eight 50-liter tanks filled with 15 liters of water, of which four tanks were subjected to vAh challenge and the other four for mock challenge. Fish mortality for all above treatments and following experiments was monitored daily for two weeks.

Effect of A. hydrophila concentration on fish mortality

Four characterized Aeromonas isolates were used to assess the effectiveness of the waterborne challenge model. Among those isolates, ML-10-51K, AL09-71 and ML-10-208K were known to be virulent A. hydrophila. The pathogenicity of ALG10-089 (A. veronii) was unknown. In this trial, 20 Af-clipped fish were added to 50-liter tanks filled with 15 liters of water (27±1ºC). The fish were challenged by adding 100 mL of TSB culture (with approximately 3 x 109 cfu/mL) of each isolate. Water flow was resumed following 1 h challenge. There were three replicate tanks for each isolate. Mortalities caused by individual isolates were recorded and percent mortality was calculated 14 days post-challenge.

Effect of fish handling and wounding on mortality

As shown in Table 1, vAh caused no mortality for fish that were lightly transferred and held in tanks for 48 hours before challenge. Artificial wounding of fish skin by abrasion, though no apparent injury was seen, significantly increased mortality (20 percent). Wounding created by clipping of adipose fin resulted in about 90 percent mortality via bath immersion challenge with vAh. Diseased and moribund fish all showed reddened fins, external/internal septicemia, and iridial hemorrhage, typical clinical signs of motile Aeromonas septicemia (MAS) observed in diseased fish from aquaculture farms (i.e., in the field – Figure 2). Mock challenged Af-clipped fish appeared normal in terms of swimming and feeding behavior, had no inflammation at the site where the fin was clipped and were all alive post treatment.

Effect of A. hydrophila concentration on fish mortality

Among the four isolates tested, ML-10-51K, AL09-71 and ML-10-208K had the same agglutination titers to catfish anti-serum raised against ML-10-51K, a vAh isolate (Table 2). Three isolates caused ≥ 88 percent mortality within 72 hours under the waterborne challenge conditions (Table 2). The A. veronii isolate, ALG10-089, showed no agglutination reaction and caused no mortality during the two-week observation.

Results suggest that fish body surface wounding is an important factor leading to vAh infection. Transferred fish were resistant to infection if they were held for two days (possibly due to wound healing and/or a reduction in stress) before challenge, suggesting that fish with fresh wounds are more susceptible. A field survey of risk factors for Aeromonas hydrophila outbreaks showed that catfish ponds that were seined more than twice a year had significantly greater odds of MAS outbreaks. This observation implies that fish may suffer injuries or wounds from seining practices and become susceptible to A. hydrophila infection. From our previous studies, we noted that parasite infection can result in damage to the fish skin and gills, enhance bacterial invasion, and subsequently increase fish mortality.

To verify the effect of wounding on A. hydrophila infection, an injury was artificially created by clipping part of the adipose fin. Af-clipped catfish behaved normally in tanks in terms of swimming and feeding and no mortality was observed in mock infected (control) treatments. However, Af-clipped fish were highly susceptible to vAh infection and diseased fish showed typical clinical signs of MAS.

In summary, fresh body surface wounds may be a prerequisite for vAh infection via the waterborne route. Various types of surface wounds, possibly resulting in injuries of cutaneous mucus, make fish vulnerable to opportunistic pathogens to some extent. These results indicate that the waterborne challenge model developed in this study can effectively mimic field conditions in laboratory to reproduce MAS caused by vAh infection in catfish. The waterborne challenge model will facilitate urgently-needed studies of MAS prevention (such as wound avoidance and healing) and control (such as prophylactic vaccination, probiotics screening and antibiotic therapy). 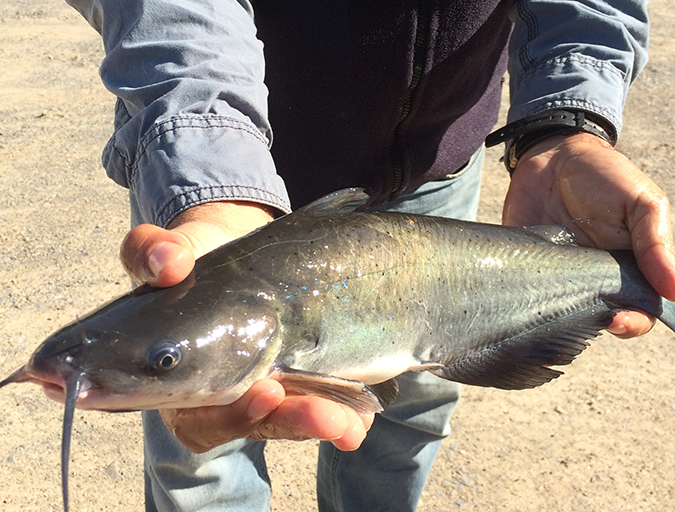 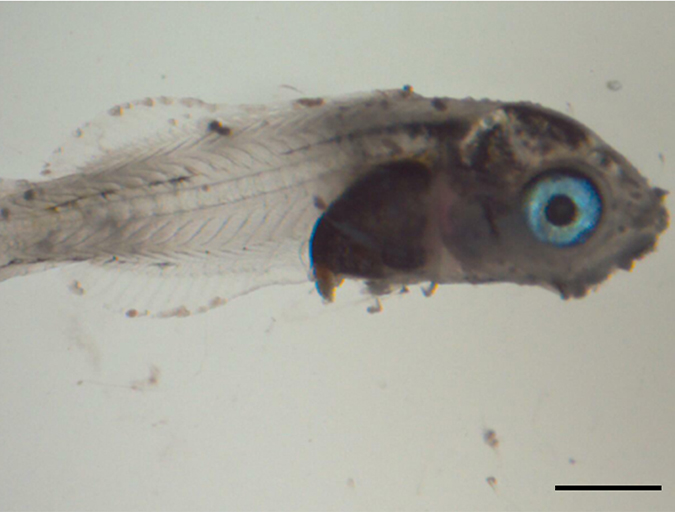