In recent years, a number of studies have demonstrated the role of a temperature-mediated component in shrimp survival to infection by White Spot Syndrome Virus (WSSV). Laboratory and field studies, along with anecdotal evidence, suggest that even slight elevations in temperature can be important in determining the survival of WSSV-infected shrimp. Until recently, however, there has been no explanation of the mechanism for this response.

Fever is understood to be a highly conserved adaptive response to infection in many animal groups. It is an ancient response shared among phylogenetically different animal groups, having emerged in a common ancestor to chordates, arthropods, and annelids over 600 million years ago.

Contrary to the general notion of animals conserving energy whenever possible, the fever strategy suggests that such an adaptation should, by its very existence, confer considerable benefit to the individual. Fever as a response to infection in endothermic animals can exert up to a sixfold increase in energy demand, while ectothermic animals – which lack the ability to generate heat – must physically move from cooler to warmer environments, spending energy and leaving them susceptible to predation.

Fever research as it pertains to human physiology and medicine has been refined over the last 50 years through the marriage of thermophysiology and immunology. Clinical studies investigated both the beneficial effects of fever and the detrimental effects of antipyretic therapy, such as the use of aspirin and acetaminophen for the treatment of non-life-threatening infections.

In these cases, antipyretic therapy lengthened the time to recovery even though painful and uncomfortable symptoms were mitigated. However, it should be noted that in many studies the magnitude of the survival response was highly variable, suggesting the mechanisms are complex and not necessarily predictable, relative to the severity of the infection.

In animals, core temperature can be affected through antipyretic drugs, manipulation of temperature-sensitive afferent nerves, or warming or cooling via external means. Studies with lizards and goldfish – which, like shrimp, rely on external warming and cooling – have shown 2.7- and 1.5-fold increases in survival following 2 degrees (38 to 40 degrees-C) and 4.7 degrees (28 to 32.7 degrees-C) increases in core temperature, respectively, after infection with Aeromonas hydrophila. Perhaps more interestingly, all the lizards that underwent a course of antipyretic therapy with sodium salicylate following the infection died, while their febrile counterparts survived.

The most obvious mechanism to explain these observations is that pathogen viability is somehow affected by higher temperature. Some pathogens are certainly sensitive to higher temperatures, but most proliferate within the febrile ranges (28 to 42 degrees-C) usually encountered among animals. This suggests that the conferred benefits of fever are perhaps mediated more effectively through host defenses than by any inhibition of pathogen metabolism via thermogenic means. Models in which host defenses were evaluated have shown both the beneficial and detrimental effects of increased core temperatures on host immune systems. In mice, a 37 to 40 degrees-C increase followed by a challenge with bacterial endotoxin lipopolysaccharide reduced survival and increased levels of plasma tumor necrosis factorα. Yet an increase in temperature to 39.5 degrees-C following exposure to Klebsiella pneumoniae improved the survival rate and reduced plasma levels.

A similar range of effects on immune cell functions has also been reported, including innate and acquired immunity (Table 1). This illustrates the complexity of effects of febrile temperature over a range of immune functions. The responses can often be contradictory, with enhancement replaced by inhibition as temperature crosses a known febrile range. But there are enough examples of the beneficial effects of fever on immune cell function to argue that, overall, fever enhances rather than diminishes survival response.

In addition to substantial information on the phylogenic groups studied under thermobiology, published data supporting the idea that environmental changes in temperature mediate crustacean immune systems have been available since the 1960s. Studies with fiddler crabs (Uca pugilator) demonstrated increased haemocyte counts at increased temperatures. In addition, the antibacterial activity of haemocytes in Carcinus maenas was reported greater in summer than winter months.

Available information suggests that increased temperatures stimulate immune system function in Penaeus californiensis and P. stylirostris (Vargas-Albores et al. 1998; Le Moullac and Haffner 2000). In addition, Rodriguez and Sonnenholzher (2001) reported a more intense immunological reaction in (P. vannamei) that resulted in the proliferation of haemocytes at 33 degrees-C instead of 27 degrees following exposure to WSSV.

It is interesting that the complexity and contradictory nature of immunological reactions over the range of febrile temperatures reported by thermobiologists is also reflected in many studies conducted with penaeid shrimp, implying a connection between fever and a survival mechanism in diseased shrimp.

Research studies in Colombia, Ecuador, and Honduras have demonstrated the significance of fever with P. vannamei as an animal model. These studies showed a significant increase in host survival at temperatures over 30 degrees-C following exposure to WSSV, while temperatures below 30 degrees resulted in accumulated mortality of 90 percent or greater.

A bioassay was conduted with P. vannamei at 26 and 32 degrees-C, and ambient temperature to determine the incidence of WSSV after oral challenge. Interestingly, histological analysis on representatives of the bioassay at 26 and 32 degrees demonstrated highly significant differences in the level of WSSV inclusion bodies found in each test group (Figs. 1 and 2). The results suggested viral replication was inhibited at the higher temperature through an unknown mechanism (Fig. 3). These findings were also confirmed in pond studies where WSSV incidence was correlated with temperature differences.

Although evidence from a number of disciplines supports the role of febrile temperature in the survival response to WSSV displayed by penaeid shrimp, additional work is needed to understand the mechanisms involved. Through the development of suitable models of infection that link immune defense and pathogen susceptibility, we will be able to better determine how this mediation is effected. 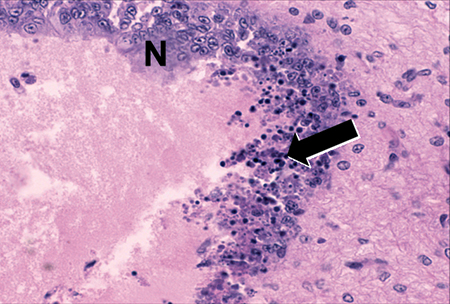 Shrimp farming in Belize, Central America, was hard hit by Taura Syndrome Virus (TSV, now known as TSV serotype A) in 1996 and a re-emergence in 2002. 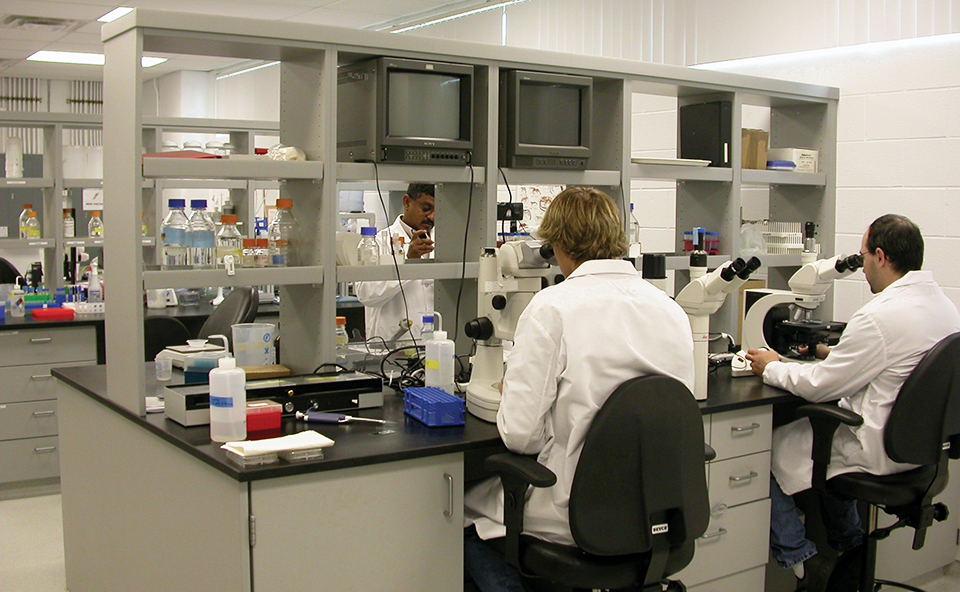 Genetics is an important factor in shrimp farming. Improvements in disease resistance and robustness can be achieved with within-family selection, shorter generation intervals and marker-assisted selection.