It is widely recognized that the rate of nitrification in biofiltration is greatly influenced by numerous water quality variables. Assuming that flow does not limit the rate of nitrification in a biofilter, perhaps most important are the concentration of total ammonia nitrogen (TAN) in the system water, water temperature and salinity, and the amount of organic carbon in the system water.

Historically, studies have reported nitrification rates based upon media specific surface areas, with value placed on higher SSA values. In theory, the greater the SSA, the more living space for bacteria. In an ideal world, this would translate into higher nitrification rates.

In the real world of commercial aquaculture, however, the bacteria create a biofilm that can effectively cover the media, possibly in a way that clogs the topographic or porous features of the media designed to increase the specific surface area. This covering of the media essentially creates new media topography and reduces the actual surface area used by the bacteria.

The accuracy of this measurement of nitrification is not inclined to error introduced by assumptions of the inhabitable surface area of the biofilter media. It is a direct measure of the capacity of the filter based on its easily measurable volume.

Under most conditions encountered in commercial aquaculture, TAN concentrations are maintained below 2 mg/L. At these levels, there is generally a linear relationship between the TAN conversion rate and TAN concentration in the filter. When values rise much above 3-4 mg TAN/L, there is usually no further increase in the rate of nitrification.

Fig. 1 is an example of the relationship of the TAN concentration in a biofilter reactor to the VTR used in a recirculating aquaculture system (RAS). The slope of the near-linear relationship and peak of the nitrification rate are specific to the biofilter media and system water quality. Keep in mind that the rate of nitrification can be limited by other water quality parameters, such as dissolved-oxygen concentration, temperature, salinity and concentration of dissolved organic carbon.

Additionally, the turnover rate and physical movement of ammonia nitrogen from the culture tank to and through the biofilter can limit the activity of a biofilter. The designer should pay close attention to the required concentration of TAN leaving the biofilter. In general, the lower the TAN concentration, the larger the biofilter will need to be.

Competition for nutrients and oxygen between these two types of bacteria results in a stratified biofilm structure. The faster-growing heterotrophic bacteria tend to occupy the outer layer of the stratified biofilm, where substrate concentration and detachment rates are both higher. Slower-growing nitrifying (autotrophic) bacteria occupy the inner biofilm layer.

Decreased nitrification rates have undesirable effects on water quality, including higher TAN concentrations, and create stress on the culture animals. As the ratio of organic carbon to ammonia-nitrogen increases to 1:1, a reduction of over 70 percent of the nitrification rate in the biofilter can be seen. As such, uneaten feed and feces should be removed from the process flow as quickly as possible – and certainly before the flow enters the biological filter.

The influence of temperature on nitrification in fixed biofilm processes like those in a biofilter is more complicated than that on the suspended growth processes found in domestic wastewater treatment. In suspended growth reactors, higher biological reaction rates are observed as the system reaches an optimum temperature, above which rates usually decrease. Predicting the effects of temperature on a fixed-film bioreactor is difficult because, as noted above, the diffusional transport of nutrients and oxygen into the biofilm is of major importance to the nitrification rate.

Studies have shown the effects of temperature on nitrification in aquaculture biofilters are less significant than previously thought. Dissolved oxygen (D.O.) may become more of a limiting factor at higher temperatures due to the diffusion process limitation of oxygen flux.

The D.O. saturation concentration in water decreases as temperature increases. Thus, studies have shown that oxygen limitation usually has more impact on biofilter performance at temperatures between 14 and 27 degrees C than temperature variation does.

Perhaps the most important message from this is that more attention should be paid to organic carbon concentration build-up in recirculating system water. Since commercial RAS operate at low TAN concentrations and high feed rates, the resulting organic loads play a much larger role in biofilter performance than temperature or almost any other water quality parameter.

Marine species in general tend to be more sensitive to elevated levels of ammonia-nitrogen concentrations. Therefore, a system with saltwater may need to be designed to maintain lower concentrations of TAN. There is a relative abundance of published information on nitrification for freshwater systems, compared to the information available on seawater systems.

There has been some debate about the effects of seawater on nitrification. Several studies showed the rate of nitrification in saltwater biofilters was approximately 40 percent lower than in similar freshwater systems. Therefore, when designing marine RAS, one must take into account both the lower level of tolerance of TAN by marine species and the fact that biofilters have reduced capacity in saltwater. It is safe to say that in most cases, marine biofilters should be larger than freshwater biofilters for the same feed rates.

Editor’s Note: This article was based on information by the authors presented in chapter 31 of the 2009 publication New Technologies in Aquaculture: Improving Production Efficiency, Quality and Environmental Management, published by Woodhead Publishing, Ltd. 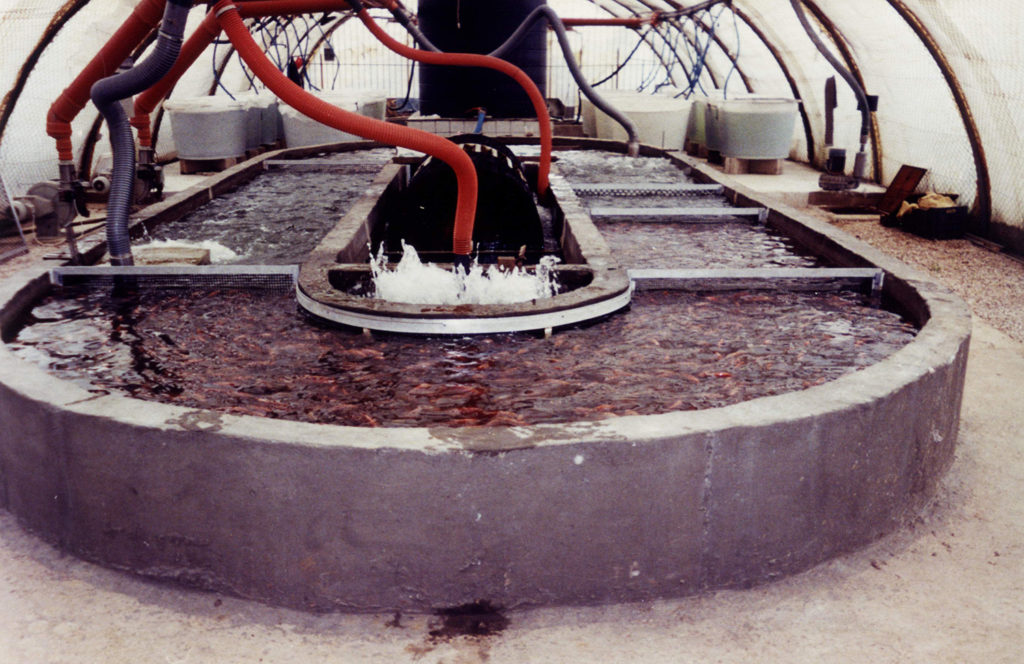 The economic and environmental performance of tilapia biofloc technology systems are compared against other conventional tilapia grow-out production systems, highlighting the merits of BFT as a competitive and sustainable alternative low-cost intensive feedlot technology.