Informed consumers and environmental lobbyists have thrown down a gauntlet to the aquafeed industry. This challenge, familiar to all, concerns the reduction, or preferably, elimination of fishmeal (FM) and fish oil (FO) from aquaculture feeds. The principal motivation behind this challenge is a desire to ensure the future viability of world fish stocks and, by extension, the ecosystems from which they are harvested. Many fisheries have reached sustainable yield or are overfished; some are in recovery, others have collapsed and a few have become extinct. With the global population burgeoning by about 1 percent or 75 million people per year, all sources of food-grade protein are precious and must be defended vigorously.

It has been suggested that most fish used for reduction to FM/FO is suitable for human consumption and should, therefore, be diverted to that purpose; if not immediately, certainly in the near future. The substitution of FM/FO from aquafeeds thus represents a moral/ethical imperative. Aquaculturists have studied the feed and feeding habits of cultured animals for centuries but the possibility of substituting marine resources from manufactured feeds has a more recent history (e.g., Grassl, E.F. 1957. Pelleted dry rations for trout propagation in Michigan hatcheries. Trans. Am. Fish. Soc., 86, 307-322).

There are now many examples of the complete elimination of the FM component of fish feeds, even for carnivorous species. Similar observations have been made also with cultured shrimp [Reid, B., McLean, E., Craig, S.R. 2004. Performance characteristics of shrimp (Litopenaeus vannamei) fed a certified organic feed versus an investigational organic aquafeed. In: Proceedings of the 5th International Conference on Recirculating Aquaculture, Roanoke, VA, USA, July 22 to 25, pp. 539-542]. More difficult however, has been the replacement of dietary FO.

Many farmed species are able to synthesize some fatty acids but others, such as the omega-3 long chain polyunsaturated fatty acid (omega-3 LC-PUFA) docosahexaenoic acid (DHA; 22:6 omega-3), must be derived from the diet. omega-3 LC-PUFAs are intimately involved in numerous biological functions in aquacultured organisms and humans (Fig. 1). Half a century ago researchers from Aalborg North Hospital, Denmark, reported that a diet rich in omega-3 LC-PUFA substantially reduced serum cholesterol, triglycerides, β-lipoprotein and pre-β-lipoprotein in Inuit. Lowered levels of these different lipid types were associated with a reduction in heart disease and diabetes mellitus, an effect that stimulated interest in examining the health benefits of dietary fish oil.

More than 8,000 clinical trials later it is now well-established that eicosapentaenoic acid (EPA; 20:5 omega-3) and DHA are conditionally essential in man and positively modify a range of physiological functions (Fig. 1) to the extent that nutritional guidelines advise regular consumption of seafood – rich sources of both EPA and DHA.

If the health benefits of seafood are to be maintained, substitution of FO in aquafeeds must preserve the levels of conditionally essential omega-3 LC-PUFA in the flesh of the final product (https://abdn.pure.elsevier.com/en/publications/the-potential-impact-of-compositional-changes-in-farmed-fish-on-i ). As well, replacement of FO in aquafeed must not have negative effects on the health or growth performance of the farmed animal.

Our study examined the functionality of microalgal oil rich in DHA and EPA (Veramaris® Vera Oil®), and the benefits of MrFeed® Pro50®, a sustainable and functional ingredient able to replace FM. The oil product was derived from the heterotrophic protist Schizochytrium limacinum (Family Thraustochytriaceae). Specifically, the trial compared the response of Pacific white shrimp, Litopenaeus vannamei, fed algal oil-based diets against experimental and commercial feeds and assessed their ability to withstand challenge with the bacterium Vibrio parahaemolyticus, causative agent of early mortality syndrome/acute hepatopancreatic necrosis syndrome (EMS/AHPNS) which has been responsible for significant losses in shrimp production on a global basis.

PCR-evaluated SPF shrimp of ~3 grams were randomly placed into 120-liter plastic tanks filled with 100-liter 20 ppt brackish water and serviced by an airlift-based biofilter (28.14 ±0.75 degrees-C, pH 7.87 ± 0.05, and DO2 6.82 ± 0.01 mg per liter, and a 12:12-hour light/dark cycle). The 40-day trial comprised a one-day adaptation period, a 28-day feeding period, one-day EMS/AHPND immersion challenge, and a 10-day post-challenge mortality study. A stocking density of 20 shrimp per tank was used (200 shrimp per cubic meter) and the experiment comprised eight groups with four replicates.

The bacterial isolate used was collected from EMS/AHPND infected Penaeus vannamei from a shrimp farm in Loc An, Vung Tau Province, Vietnam. Tryptic Soy Broth + 2 percent sodium chloride (TSB+) was inoculated with a consistently virulent strain of V. parahaemolyticus, incubated for 24 hours, and added directly into tanks to achieve a density of 7.5×105 CFU/mL, which was expected to kill 90 percent positive control shrimp within 10 days of challenge. Positive controls and treatment tanks were subjected to an immersion challenge while non-inoculated, negative controls were treated with sterile TSB+, meaning that the shrimp were not challenged with the bacteria.

Shrimp were fed their respective diet to satiation 4 times daily (5-10 percent body weight) for the duration of the trial. Feed amount was adjusted based on tank biomass and shrimp feeding behavior. Feed consumption, general behavior and survival throughout the trial was recorded daily at 08.30, 11.00, 14.30 and 20.00 h. Shrimp were fed one of 6 experimental or a positive and negative commercial diet (Grobest Feed #2; Table 1). Complete formulæ are available on request.

FO and FM are finite resources. Their supply can fluctuate due to natural events such as El Niño, which, in turn, may be impacted by global climate change. Moreover, there is increasing competition for FO by sectors such as the pharmaceutical, cosmetic and animal feed industries and pressure is being brought to bear to use forage fish for human food. Traditional users of FO include makers of paint, lubricants and coatings, and the tanning, rubber, edible oil, soap and synthetic wax industries. It is unlikely, therefore, that FO supplies will be able to match current needs when paired with a rapidly growing aquaculture sector. Even in the unlikely event that other consumers reduce FO use, its cost will inevitably increase.

A reduction/elimination of FO from aquafeeds is thus fundamental to support projected growth trajectories while also providing the business with a greener bearing. The observations here determine that 100 percent of FO can be successfully replaced in aquafeeds by oil derived from the thraustochytrid S. limacinum. This protist is characterized by high lipid content and is particularly rich in DHA. Additionally, the Veramaris®/Menon® MrFeed®-containing diet – diet 6 – returned statistically significant higher levels of survival than the positive control commercial feed or experimental diet.

Other studies that have added microalgae to crustacean diets report an immunostimulatory effect. For example, addition of the single cell green algae Chlorella, replacing 6 to 8 percent of the FM component of the feed, increased haemocyte count and prophenol oxidase (PO) activity in postlarvae of the giant freshwater prawn. PO is a major innate defense mechanism akin to the complement cascade of mammals.

Like our findings with the V. parahaemolyticus challenge and Veramaris®/Menon®, Chlorella­-based diets appeared to enhance resistance to Aeromonas hydrophila infection. Incorporation of the halophytic (salt-tolerant) microalga Dunaliella salina at 2 percent of the diet of black tiger shrimp enhanced antioxidant status and elevated survival rate from white spot syndrome virus. Future studies with Veramaris®/Menon®-based diets and shrimp will investigate immune system dynamics to enhance our current understanding of the benefits of this FO/FM replacer for shrimp and fish.

Another issue that has become more prominent in general relates to food safety. It is now clear that some forage fish used in FM/FO reduction may be contaminated with persistent organic toxins such as dioxins and furans, heavy metals and other pollutants that may bioaccumulate in farmed animals. These toxicants have the potential for negative impacts on a variety of physiological control processes in cultured organisms and end users. While new technologies reduce and remove some of these contaminants during FO manufacture, additional expense is incurred.

Due to its controlled production environment S. limacinum avoids all problems associated with environmental contaminants and thereby represents an untainted ingredient. The mass cultivation technology for Schizochytrium is already well developed and it is anticipated that large quantities of Vermaris® will be produced imminently as a FO replacer for aquafeeds. The present study categorically demonstrates that shrimp, and likely many other species, can be cultivated without FM and FO, thereby enabling aquaculture expansion to continue unabated, despite fluctuations in FM/FO resources. 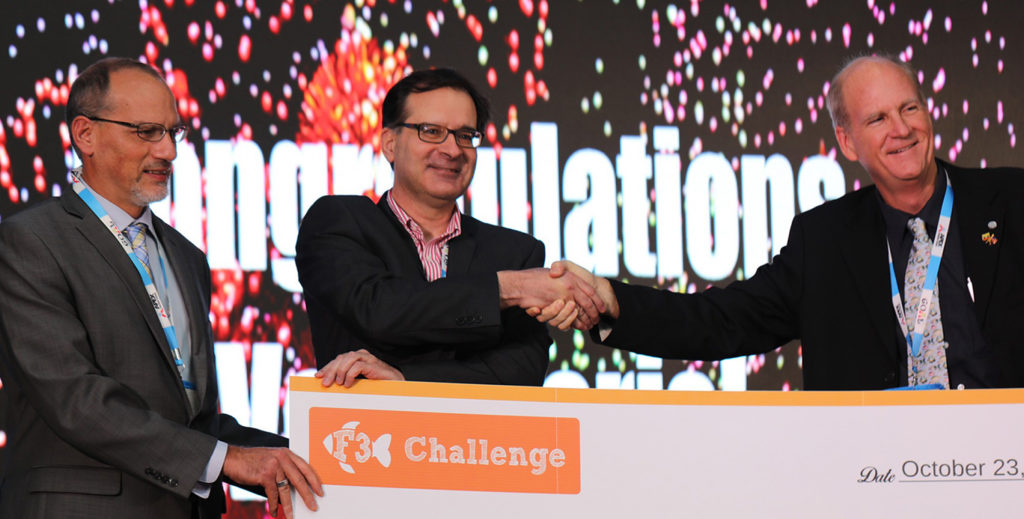