Martec Industries is one of the largest fish-processing companies operating in Central America and the first one to commercially farm raise spotted rose snappers from egg to market. The company has been working in partnership with the United States Soybean Export Council to determine the best levels of replacement of fishmeal and fish oil with alternative sources for this species of snapper. The efforts are aimed at improving the ecological and economical efficiencies of the Martec operations.

A commercial feeding demonstration was set up to evaluate the partial replacement of fishmeal in a diet for the spotted rose snapper with a soy protein concentrate (SPC) product containing 55.37 percent protein, low soy antinutritional factor content and low trypsin inhibitor activity.

The 75-day demonstration was conducted at the Martec experimental cage farm station located near Isla Cedro at Paquera, Puntarenas Province, Costa Rica. The facility is used primarily for broodstock development and experimental studies related to nutrition and production technologies for growout stages.

Three diets were tested in the feeding demonstration. Diet 1, an SPC-based feed, was formulated to contain 50 percent crude protein and 13 percent fat with a total inclusion level up to 26.4 percent. It was nutritionally equivalent to a commercial fishmeal-based diet manufactured locally (diet 2) and a commercial diet from Japan (diet 3).

The feeding demonstration was conducted in 12, 1.2-m3 experimental cage units placed inside the farm’s two broodstock cages in the prevailing water current to maximize water exchange.

Spotted rose snappers produced by Martec’s hatchery at Rancho Chico in Playa Bejuco, Nandayure, Guanacaste Province and weighing about 2.39 g each were stocked at a density of 170 fish/cage, which was equivalent to a biomass of 0.34 kg/m3. 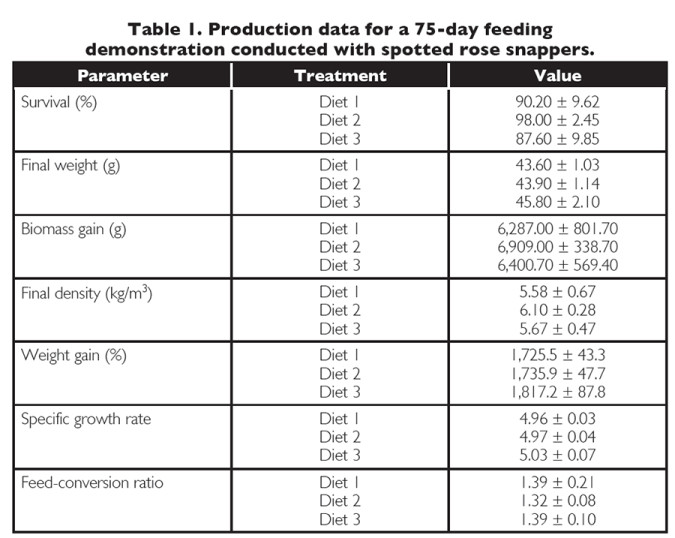 Final biomass per cage unit averaged 5.58 kg/m3 for the replicates fed the SPC-based diet and 5.67 kg/m3 for fish in the diet 3 treatment. For fish in units fed diet 2, biomass reached 6.10 kg/m3. Biomass gain ranged from 6.30 to 6.90 kg during the demonstration period.

The analysis of the production variables obtained at the end of this feeding demonstration indicated no significant difference among the three feed treatments. Results supported the use of SPC as a partial replacement for fishmeal in diets for spotted rose snappers when it is cost effective to do so.

Research performed in 2012 by Yessica Silva-Carrillo and co-authors found that regular soybean meal can substitute for up to 20 percent of the fishmeal used in spotted rose snapper diets, representing approximately 10.5 percent soybean meal inclusion. In this feeding demonstration, SPC inclusion of 26.4 percent yielded snapper performance similar to that of fish that received fishmeal-based diets. Hence, both soybean meal and soy protein concentrate can serve as potential replacements for fishmeal without affecting growth performance.

Availability and the cost of fishmeal in the future are two conditions that might shift the cost of the SPC experimental diet compared to the commercial diets. Hence, continued development of diets based on SPC and soybean meal can be considered a key aspect for an environmentally and economically sustainable aquaculture industry.